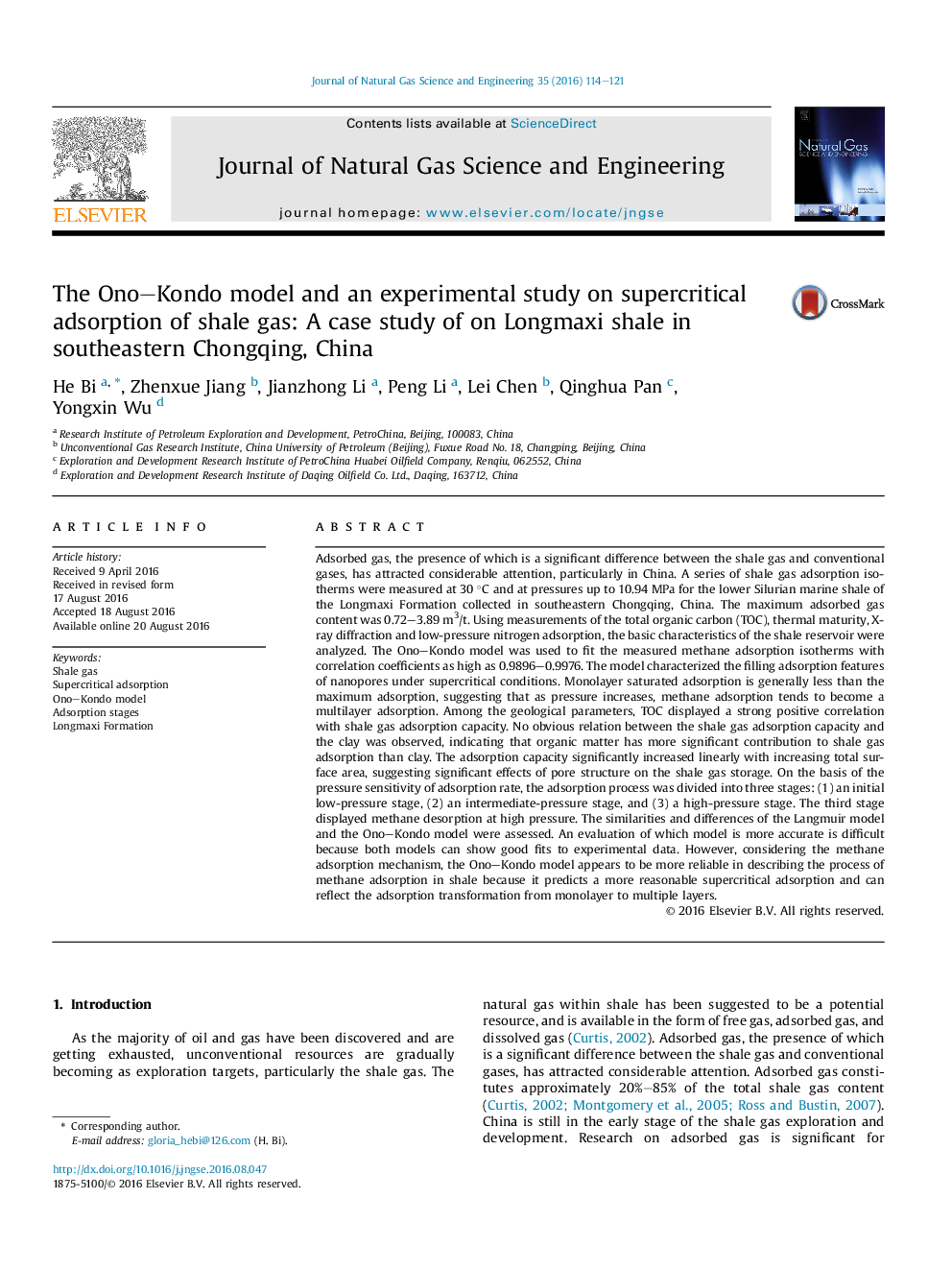 • Ono–Kondo model was used to estimate the supercritical adsorption of shale gas in Longmaxi Formation.
• Characterizations of shale gas supercritical adsorption in Longmaxi Formation were investigated.
• Adsorption process was determined and divided in to three stages.
• The phenomenon of methane desorption at the high pressure was illustrated.
• The similarity and difference between Langmuir model and Ono–Kondo model were determined.

Adsorbed gas, the presence of which is a significant difference between the shale gas and conventional gases, has attracted considerable attention, particularly in China. A series of shale gas adsorption isotherms were measured at 30 °C and at pressures up to 10.94 MPa for the lower Silurian marine shale of the Longmaxi Formation collected in southeastern Chongqing, China. The maximum adsorbed gas content was 0.72–3.89 m3/t. Using measurements of the total organic carbon (TOC), thermal maturity, X-ray diffraction and low-pressure nitrogen adsorption, the basic characteristics of the shale reservoir were analyzed. The Ono–Kondo model was used to fit the measured methane adsorption isotherms with correlation coefficients as high as 0.9896–0.9976. The model characterized the filling adsorption features of nanopores under supercritical conditions. Monolayer saturated adsorption is generally less than the maximum adsorption, suggesting that as pressure increases, methane adsorption tends to become a multilayer adsorption. Among the geological parameters, TOC displayed a strong positive correlation with shale gas adsorption capacity. No obvious relation between the shale gas adsorption capacity and the clay was observed, indicating that organic matter has more significant contribution to shale gas adsorption than clay. The adsorption capacity significantly increased linearly with increasing total surface area, suggesting significant effects of pore structure on the shale gas storage. On the basis of the pressure sensitivity of adsorption rate, the adsorption process was divided into three stages: (1) an initial low-pressure stage, (2) an intermediate-pressure stage, and (3) a high-pressure stage. The third stage displayed methane desorption at high pressure. The similarities and differences of the Langmuir model and the Ono–Kondo model were assessed. An evaluation of which model is more accurate is difficult because both models can show good fits to experimental data. However, considering the methane adsorption mechanism, the Ono–Kondo model appears to be more reliable in describing the process of methane adsorption in shale because it predicts a more reasonable supercritical adsorption and can reflect the adsorption transformation from monolayer to multiple layers.