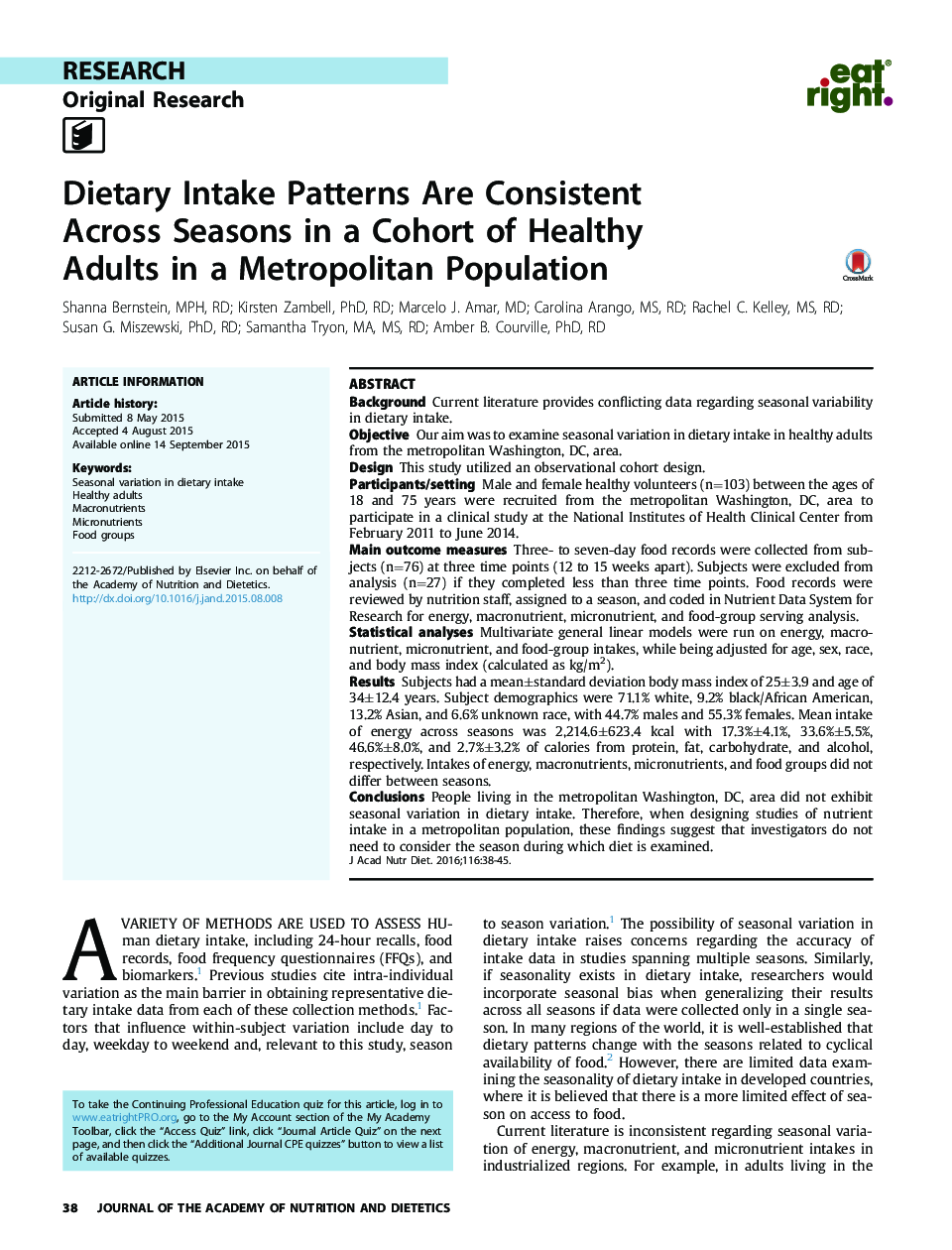 BackgroundCurrent literature provides conflicting data regarding seasonal variability in dietary intake.ObjectiveOur aim was to examine seasonal variation in dietary intake in healthy adults from the metropolitan Washington, DC, area.DesignThis study utilized an observational cohort design.Participants/settingMale and female healthy volunteers (n=103) between the ages of 18 and 75 years were recruited from the metropolitan Washington, DC, area to participate in a clinical study at the National Institutes of Health Clinical Center from February 2011 to June 2014.Main outcome measuresThree- to seven-day food records were collected from subjects (n=76) at three time points (12 to 15 weeks apart). Subjects were excluded from analysis (n=27) if they completed less than three time points. Food records were reviewed by nutrition staff, assigned to a season, and coded in Nutrient Data System for Research for energy, macronutrient, micronutrient, and food-group serving analysis.Statistical analysesMultivariate general linear models were run on energy, macronutrient, micronutrient, and food-group intakes, while being adjusted for age, sex, race, and body mass index (calculated as kg/m2).ResultsSubjects had a mean±standard deviation body mass index of 25±3.9 and age of 34±12.4 years. Subject demographics were 71.1% white, 9.2% black/African American, 13.2% Asian, and 6.6% unknown race, with 44.7% males and 55.3% females. Mean intake of energy across seasons was 2,214.6±623.4 kcal with 17.3%±4.1%, 33.6%±5.5%, 46.6%±8.0%, and 2.7%±3.2% of calories from protein, fat, carbohydrate, and alcohol, respectively. Intakes of energy, macronutrients, micronutrients, and food groups did not differ between seasons.ConclusionsPeople living in the metropolitan Washington, DC, area did not exhibit seasonal variation in dietary intake. Therefore, when designing studies of nutrient intake in a metropolitan population, these findings suggest that investigators do not need to consider the season during which diet is examined.