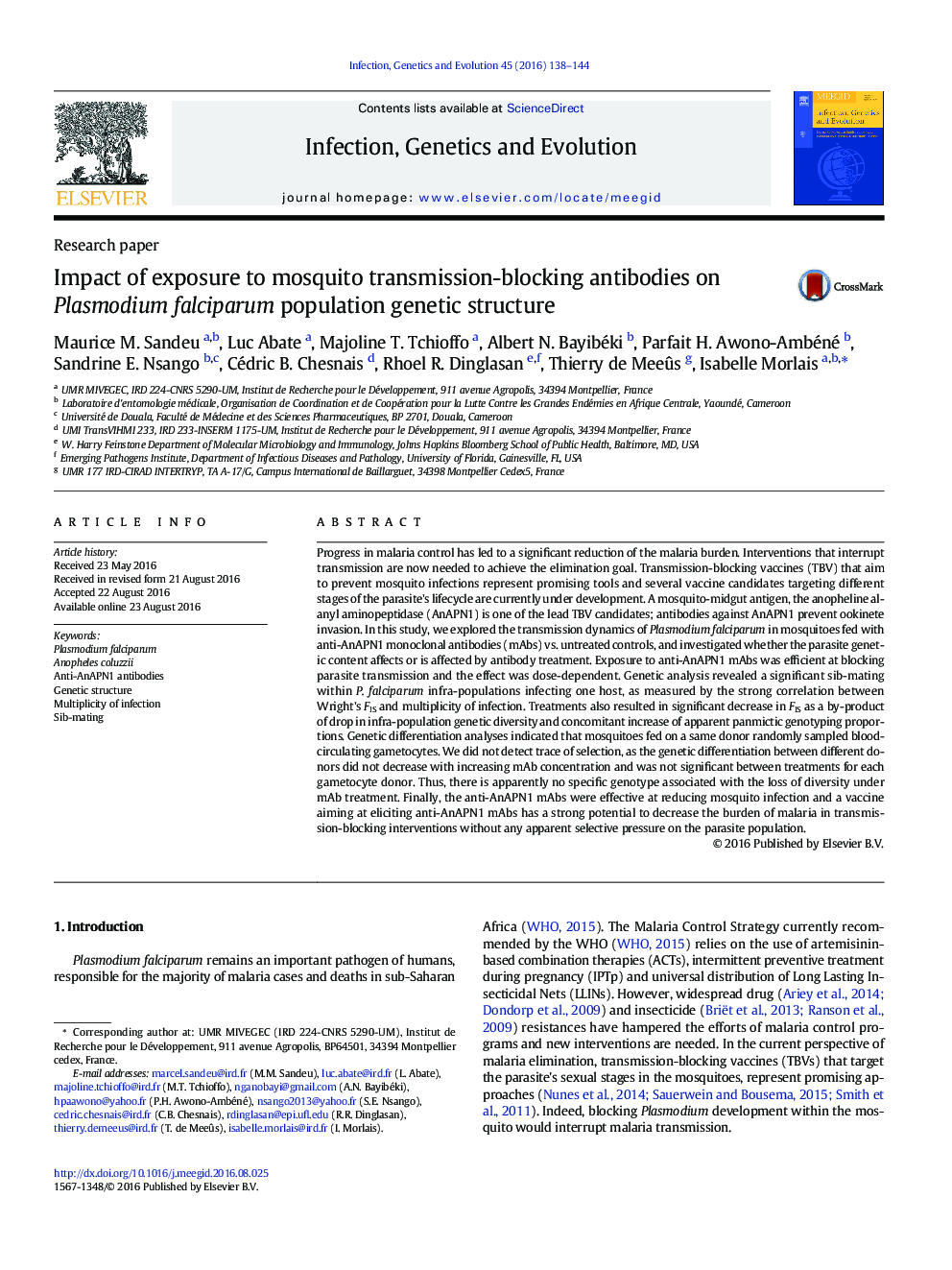 • Random distribution of genetic variation among mosquitoes fed on a same gametocyte donor.
• Vaccine exposure results in a drop in infra-population genetic diversity
• Strong correlation between Wright's FIS and multiplicity of infection

Progress in malaria control has led to a significant reduction of the malaria burden. Interventions that interrupt transmission are now needed to achieve the elimination goal. Transmission-blocking vaccines (TBV) that aim to prevent mosquito infections represent promising tools and several vaccine candidates targeting different stages of the parasite's lifecycle are currently under development. A mosquito-midgut antigen, the anopheline alanyl aminopeptidase (AnAPN1) is one of the lead TBV candidates; antibodies against AnAPN1 prevent ookinete invasion. In this study, we explored the transmission dynamics of Plasmodium falciparum in mosquitoes fed with anti-AnAPN1 monoclonal antibodies (mAbs) vs. untreated controls, and investigated whether the parasite genetic content affects or is affected by antibody treatment. Exposure to anti-AnAPN1 mAbs was efficient at blocking parasite transmission and the effect was dose-dependent. Genetic analysis revealed a significant sib-mating within P. falciparum infra-populations infecting one host, as measured by the strong correlation between Wright's FIS and multiplicity of infection. Treatments also resulted in significant decrease in FIS as a by-product of drop in infra-population genetic diversity and concomitant increase of apparent panmictic genotyping proportions. Genetic differentiation analyses indicated that mosquitoes fed on a same donor randomly sampled blood-circulating gametocytes. We did not detect trace of selection, as the genetic differentiation between different donors did not decrease with increasing mAb concentration and was not significant between treatments for each gametocyte donor. Thus, there is apparently no specific genotype associated with the loss of diversity under mAb treatment. Finally, the anti-AnAPN1 mAbs were effective at reducing mosquito infection and a vaccine aiming at eliciting anti-AnAPN1 mAbs has a strong potential to decrease the burden of malaria in transmission-blocking interventions without any apparent selective pressure on the parasite population.