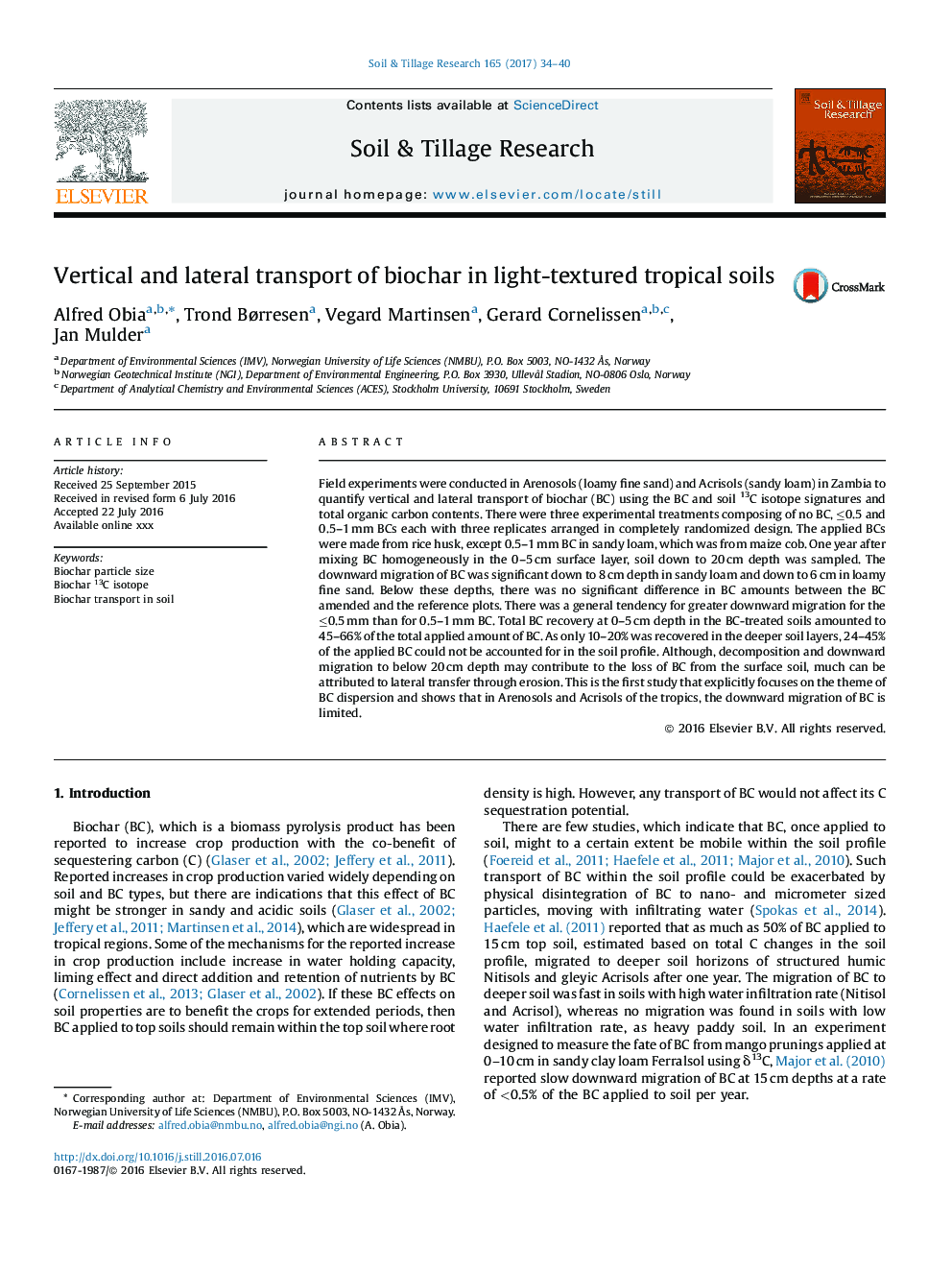 • Biochar of ≤0.5 and 0.5–1 mm sizes were applied to soil.
• Migration rate to deeper soil was higher for finer biochar but limited to few cm.
• Biochar downward migration was higher in sandy loam with lower Ksat than in loamy sand.
• 55–76% of applied biochar was recovered in soil leaving 24–45% unaccounted.
• The unaccounted for biochar was transported away by erosion.

Field experiments were conducted in Arenosols (loamy fine sand) and Acrisols (sandy loam) in Zambia to quantify vertical and lateral transport of biochar (BC) using the BC and soil 13C isotope signatures and total organic carbon contents. There were three experimental treatments composing of no BC, ≤0.5 and 0.5–1 mm BCs each with three replicates arranged in completely randomized design. The applied BCs were made from rice husk, except 0.5–1 mm BC in sandy loam, which was from maize cob. One year after mixing BC homogeneously in the 0–5 cm surface layer, soil down to 20 cm depth was sampled. The downward migration of BC was significant down to 8 cm depth in sandy loam and down to 6 cm in loamy fine sand. Below these depths, there was no significant difference in BC amounts between the BC amended and the reference plots. There was a general tendency for greater downward migration for the ≤0.5 mm than for 0.5–1 mm BC. Total BC recovery at 0–5 cm depth in the BC-treated soils amounted to 45–66% of the total applied amount of BC. As only 10–20% was recovered in the deeper soil layers, 24–45% of the applied BC could not be accounted for in the soil profile. Although, decomposition and downward migration to below 20 cm depth may contribute to the loss of BC from the surface soil, much can be attributed to lateral transfer through erosion. This is the first study that explicitly focuses on the theme of BC dispersion and shows that in Arenosols and Acrisols of the tropics, the downward migration of BC is limited.