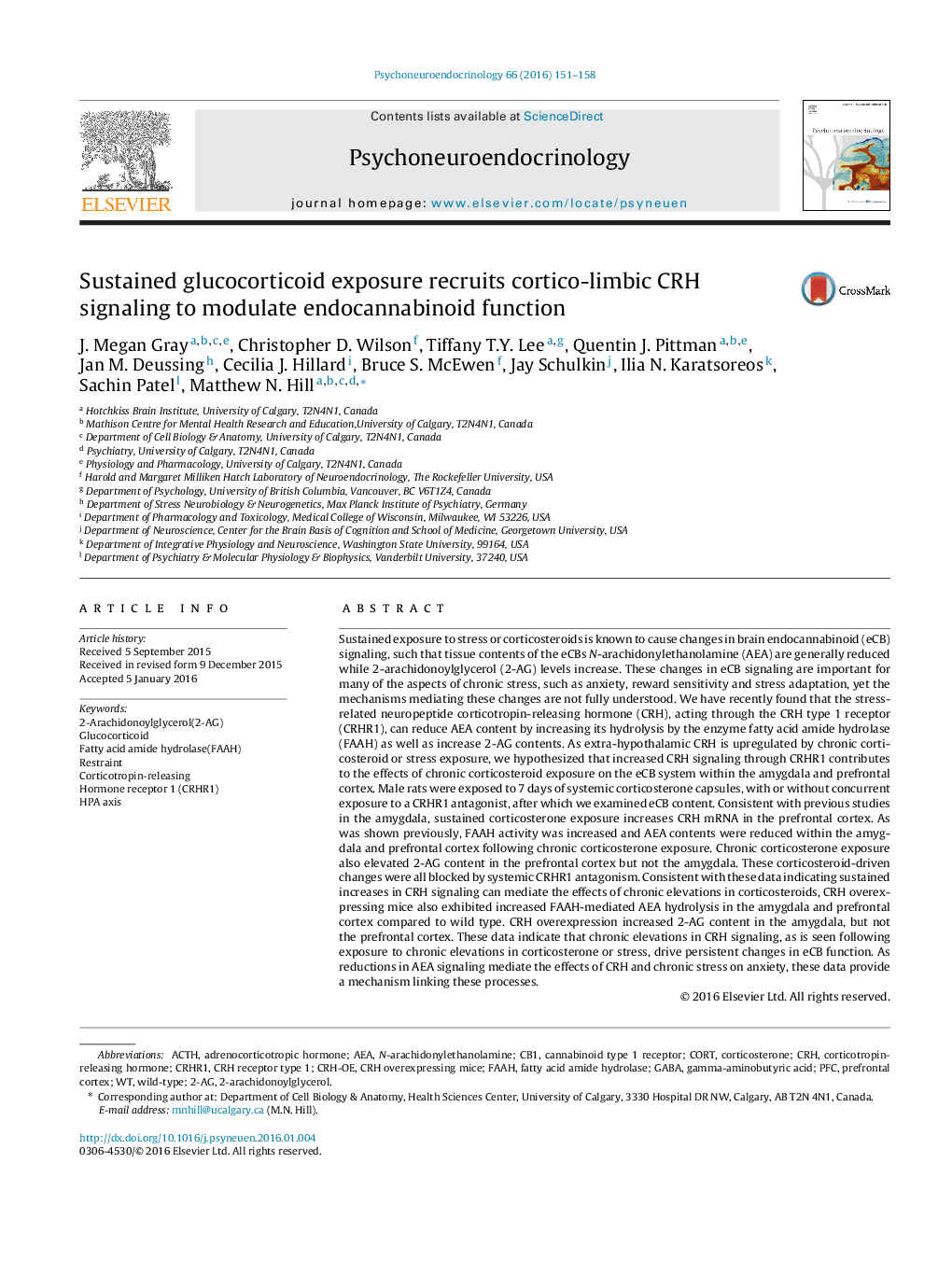 Sustained exposure to stress or corticosteroids is known to cause changes in brain endocannabinoid (eCB) signaling, such that tissue contents of the eCBs N-arachidonylethanolamine (AEA) are generally reduced while 2-arachidonoylglycerol (2-AG) levels increase. These changes in eCB signaling are important for many of the aspects of chronic stress, such as anxiety, reward sensitivity and stress adaptation, yet the mechanisms mediating these changes are not fully understood. We have recently found that the stress-related neuropeptide corticotropin-releasing hormone (CRH), acting through the CRH type 1 receptor (CRHR1), can reduce AEA content by increasing its hydrolysis by the enzyme fatty acid amide hydrolase (FAAH) as well as increase 2-AG contents. As extra-hypothalamic CRH is upregulated by chronic corticosteroid or stress exposure, we hypothesized that increased CRH signaling through CRHR1 contributes to the effects of chronic corticosteroid exposure on the eCB system within the amygdala and prefrontal cortex. Male rats were exposed to 7 days of systemic corticosterone capsules, with or without concurrent exposure to a CRHR1 antagonist, after which we examined eCB content. Consistent with previous studies in the amygdala, sustained corticosterone exposure increases CRH mRNA in the prefrontal cortex. As was shown previously, FAAH activity was increased and AEA contents were reduced within the amygdala and prefrontal cortex following chronic corticosterone exposure. Chronic corticosterone exposure also elevated 2-AG content in the prefrontal cortex but not the amygdala. These corticosteroid-driven changes were all blocked by systemic CRHR1 antagonism. Consistent with these data indicating sustained increases in CRH signaling can mediate the effects of chronic elevations in corticosteroids, CRH overexpressing mice also exhibited increased FAAH-mediated AEA hydrolysis in the amygdala and prefrontal cortex compared to wild type. CRH overexpression increased 2-AG content in the amygdala, but not the prefrontal cortex. These data indicate that chronic elevations in CRH signaling, as is seen following exposure to chronic elevations in corticosterone or stress, drive persistent changes in eCB function. As reductions in AEA signaling mediate the effects of CRH and chronic stress on anxiety, these data provide a mechanism linking these processes.