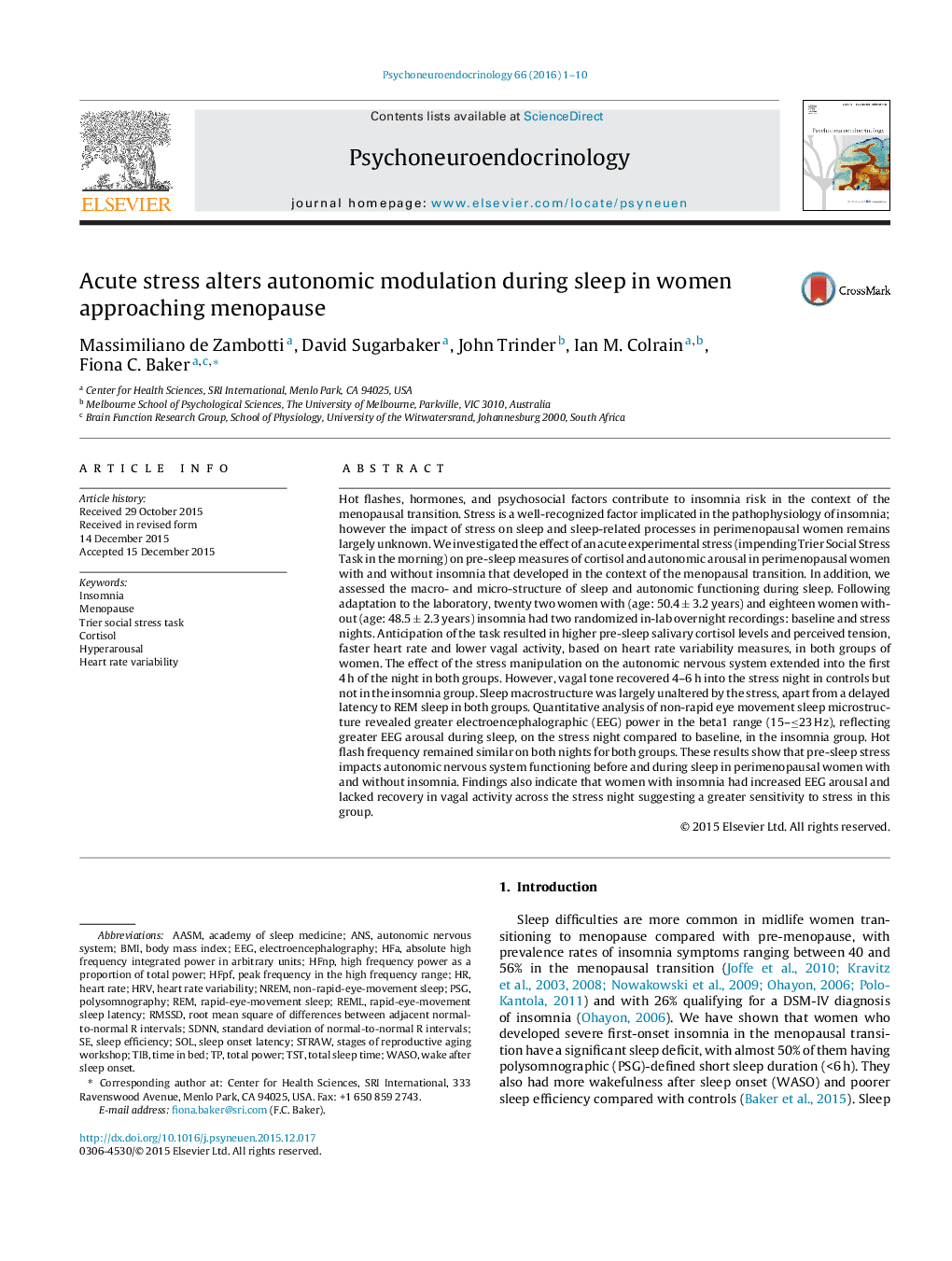 Hot flashes, hormones, and psychosocial factors contribute to insomnia risk in the context of the menopausal transition. Stress is a well-recognized factor implicated in the pathophysiology of insomnia; however the impact of stress on sleep and sleep-related processes in perimenopausal women remains largely unknown. We investigated the effect of an acute experimental stress (impending Trier Social Stress Task in the morning) on pre-sleep measures of cortisol and autonomic arousal in perimenopausal women with and without insomnia that developed in the context of the menopausal transition. In addition, we assessed the macro- and micro-structure of sleep and autonomic functioning during sleep. Following adaptation to the laboratory, twenty two women with (age: 50.4 ± 3.2 years) and eighteen women without (age: 48.5 ± 2.3 years) insomnia had two randomized in-lab overnight recordings: baseline and stress nights. Anticipation of the task resulted in higher pre-sleep salivary cortisol levels and perceived tension, faster heart rate and lower vagal activity, based on heart rate variability measures, in both groups of women. The effect of the stress manipulation on the autonomic nervous system extended into the first 4 h of the night in both groups. However, vagal tone recovered 4–6 h into the stress night in controls but not in the insomnia group. Sleep macrostructure was largely unaltered by the stress, apart from a delayed latency to REM sleep in both groups. Quantitative analysis of non-rapid eye movement sleep microstructure revealed greater electroencephalographic (EEG) power in the beta1 range (15–≤23 Hz), reflecting greater EEG arousal during sleep, on the stress night compared to baseline, in the insomnia group. Hot flash frequency remained similar on both nights for both groups. These results show that pre-sleep stress impacts autonomic nervous system functioning before and during sleep in perimenopausal women with and without insomnia. Findings also indicate that women with insomnia had increased EEG arousal and lacked recovery in vagal activity across the stress night suggesting a greater sensitivity to stress in this group.