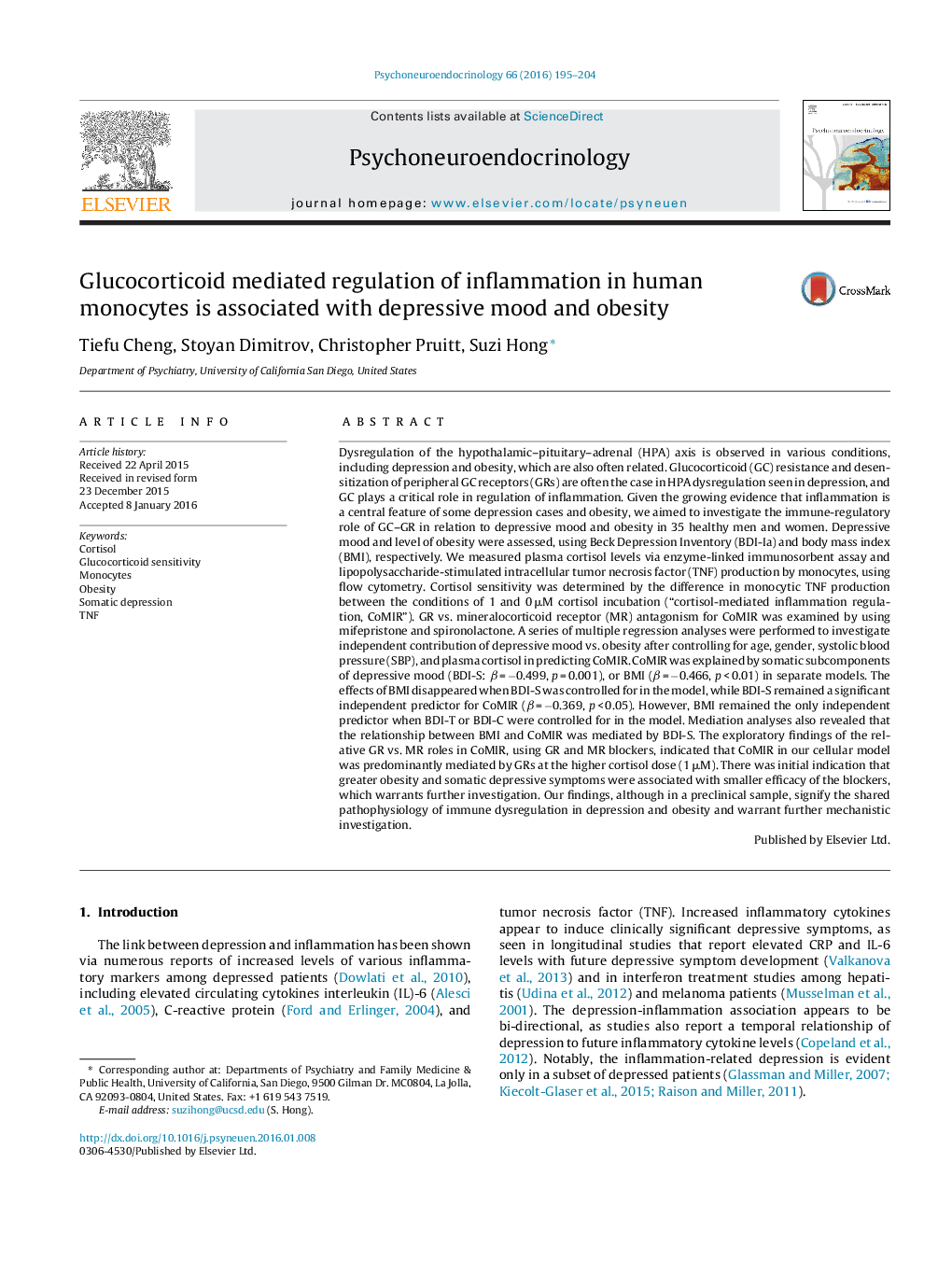 Dysregulation of the hypothalamic–pituitary–adrenal (HPA) axis is observed in various conditions, including depression and obesity, which are also often related. Glucocorticoid (GC) resistance and desensitization of peripheral GC receptors (GRs) are often the case in HPA dysregulation seen in depression, and GC plays a critical role in regulation of inflammation. Given the growing evidence that inflammation is a central feature of some depression cases and obesity, we aimed to investigate the immune-regulatory role of GC–GR in relation to depressive mood and obesity in 35 healthy men and women. Depressive mood and level of obesity were assessed, using Beck Depression Inventory (BDI-Ia) and body mass index (BMI), respectively. We measured plasma cortisol levels via enzyme-linked immunosorbent assay and lipopolysaccharide-stimulated intracellular tumor necrosis factor (TNF) production by monocytes, using flow cytometry. Cortisol sensitivity was determined by the difference in monocytic TNF production between the conditions of 1 and 0 μM cortisol incubation (“cortisol-mediated inflammation regulation, CoMIR”). GR vs. mineralocorticoid receptor (MR) antagonism for CoMIR was examined by using mifepristone and spironolactone. A series of multiple regression analyses were performed to investigate independent contribution of depressive mood vs. obesity after controlling for age, gender, systolic blood pressure (SBP), and plasma cortisol in predicting CoMIR. CoMIR was explained by somatic subcomponents of depressive mood (BDI-S: β = −0.499, p = 0.001), or BMI (β = −0.466, p < 0.01) in separate models. The effects of BMI disappeared when BDI-S was controlled for in the model, while BDI-S remained a significant independent predictor for CoMIR (β = −0.369, p < 0.05). However, BMI remained the only independent predictor when BDI-T or BDI-C were controlled for in the model. Mediation analyses also revealed that the relationship between BMI and CoMIR was mediated by BDI-S. The exploratory findings of the relative GR vs. MR roles in CoMIR, using GR and MR blockers, indicated that CoMIR in our cellular model was predominantly mediated by GRs at the higher cortisol dose (1 μM). There was initial indication that greater obesity and somatic depressive symptoms were associated with smaller efficacy of the blockers, which warrants further investigation. Our findings, although in a preclinical sample, signify the shared pathophysiology of immune dysregulation in depression and obesity and warrant further mechanistic investigation.