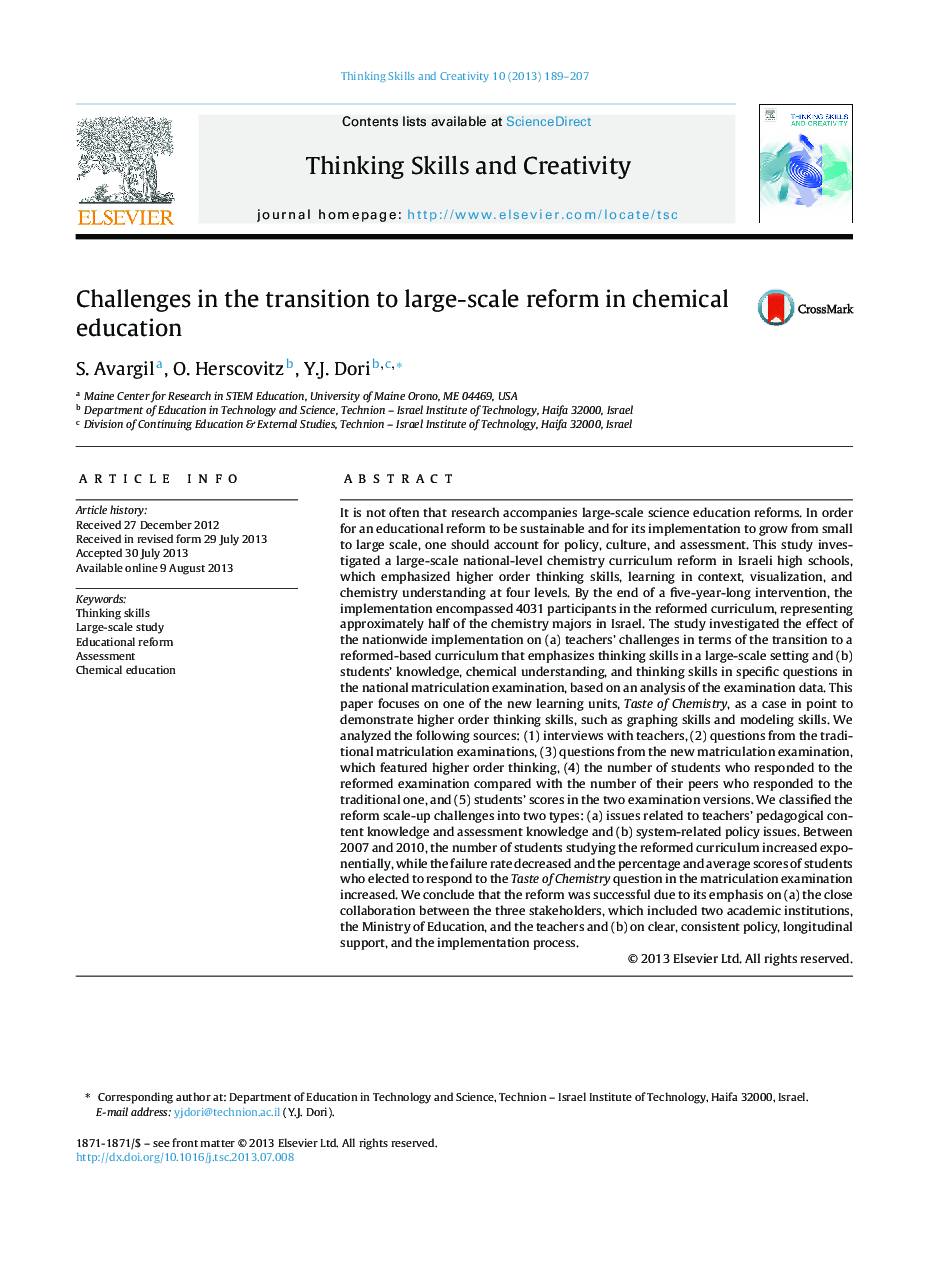 • We investigated nationwide implementation of a deep reform in chemistry education.
• We examined thinking skills that were integrated in both teaching and assessment.
• Collaboration between academia, Ministry of Education, and teachers was productive.
• Student numbers in the new program increased and failure rate decreased gradually.
• The reform was successful due to addressing teachers- and system-related challenges.

It is not often that research accompanies large-scale science education reforms. In order for an educational reform to be sustainable and for its implementation to grow from small to large scale, one should account for policy, culture, and assessment. This study investigated a large-scale national-level chemistry curriculum reform in Israeli high schools, which emphasized higher order thinking skills, learning in context, visualization, and chemistry understanding at four levels. By the end of a five-year-long intervention, the implementation encompassed 4031 participants in the reformed curriculum, representing approximately half of the chemistry majors in Israel. The study investigated the effect of the nationwide implementation on (a) teachers’ challenges in terms of the transition to a reformed-based curriculum that emphasizes thinking skills in a large-scale setting and (b) students’ knowledge, chemical understanding, and thinking skills in specific questions in the national matriculation examination, based on an analysis of the examination data. This paper focuses on one of the new learning units, Taste of Chemistry, as a case in point to demonstrate higher order thinking skills, such as graphing skills and modeling skills. We analyzed the following sources: (1) interviews with teachers, (2) questions from the traditional matriculation examinations, (3) questions from the new matriculation examination, which featured higher order thinking, (4) the number of students who responded to the reformed examination compared with the number of their peers who responded to the traditional one, and (5) students’ scores in the two examination versions. We classified the reform scale-up challenges into two types: (a) issues related to teachers’ pedagogical content knowledge and assessment knowledge and (b) system-related policy issues. Between 2007 and 2010, the number of students studying the reformed curriculum increased exponentially, while the failure rate decreased and the percentage and average scores of students who elected to respond to the Taste of Chemistry question in the matriculation examination increased. We conclude that the reform was successful due to its emphasis on (a) the close collaboration between the three stakeholders, which included two academic institutions, the Ministry of Education, and the teachers and (b) on clear, consistent policy, longitudinal support, and the implementation process.