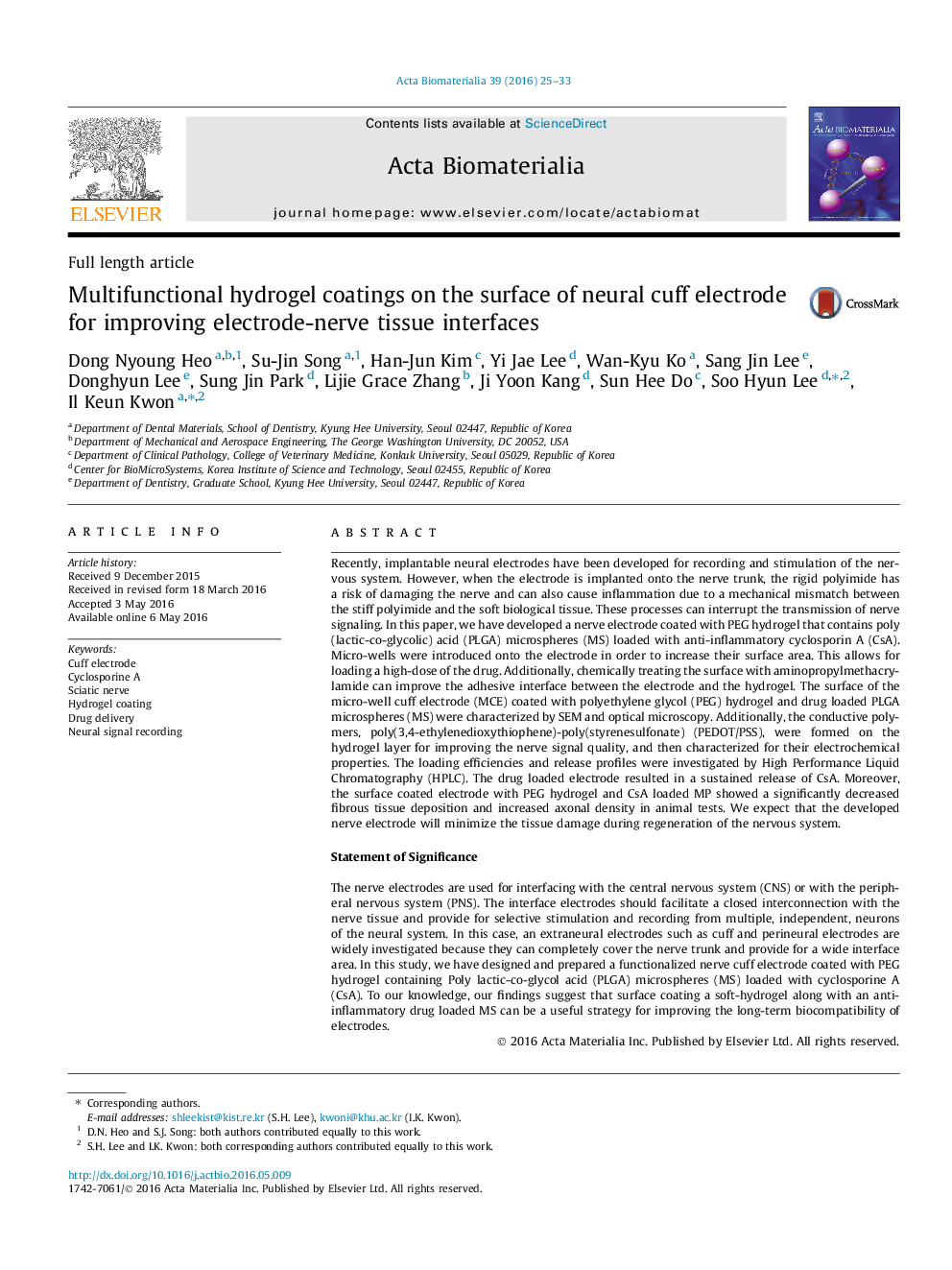 Recently, implantable neural electrodes have been developed for recording and stimulation of the nervous system. However, when the electrode is implanted onto the nerve trunk, the rigid polyimide has a risk of damaging the nerve and can also cause inflammation due to a mechanical mismatch between the stiff polyimide and the soft biological tissue. These processes can interrupt the transmission of nerve signaling. In this paper, we have developed a nerve electrode coated with PEG hydrogel that contains poly(lactic-co-glycolic) acid (PLGA) microspheres (MS) loaded with anti-inflammatory cyclosporin A (CsA). Micro-wells were introduced onto the electrode in order to increase their surface area. This allows for loading a high-dose of the drug. Additionally, chemically treating the surface with aminopropylmethacrylamide can improve the adhesive interface between the electrode and the hydrogel. The surface of the micro-well cuff electrode (MCE) coated with polyethylene glycol (PEG) hydrogel and drug loaded PLGA microspheres (MS) were characterized by SEM and optical microscopy. Additionally, the conductive polymers, poly(3,4-ethylenedioxythiophene)-poly(styrenesulfonate) (PEDOT/PSS), were formed on the hydrogel layer for improving the nerve signal quality, and then characterized for their electrochemical properties. The loading efficiencies and release profiles were investigated by High Performance Liquid Chromatography (HPLC). The drug loaded electrode resulted in a sustained release of CsA. Moreover, the surface coated electrode with PEG hydrogel and CsA loaded MP showed a significantly decreased fibrous tissue deposition and increased axonal density in animal tests. We expect that the developed nerve electrode will minimize the tissue damage during regeneration of the nervous system.Statement of SignificanceThe nerve electrodes are used for interfacing with the central nervous system (CNS) or with the peripheral nervous system (PNS). The interface electrodes should facilitate a closed interconnection with the nerve tissue and provide for selective stimulation and recording from multiple, independent, neurons of the neural system. In this case, an extraneural electrodes such as cuff and perineural electrodes are widely investigated because they can completely cover the nerve trunk and provide for a wide interface area. In this study, we have designed and prepared a functionalized nerve cuff electrode coated with PEG hydrogel containing Poly lactic-co-glycol acid (PLGA) microspheres (MS) loaded with cyclosporine A (CsA). To our knowledge, our findings suggest that surface coating a soft-hydrogel along with an anti-inflammatory drug loaded MS can be a useful strategy for improving the long-term biocompatibility of electrodes.