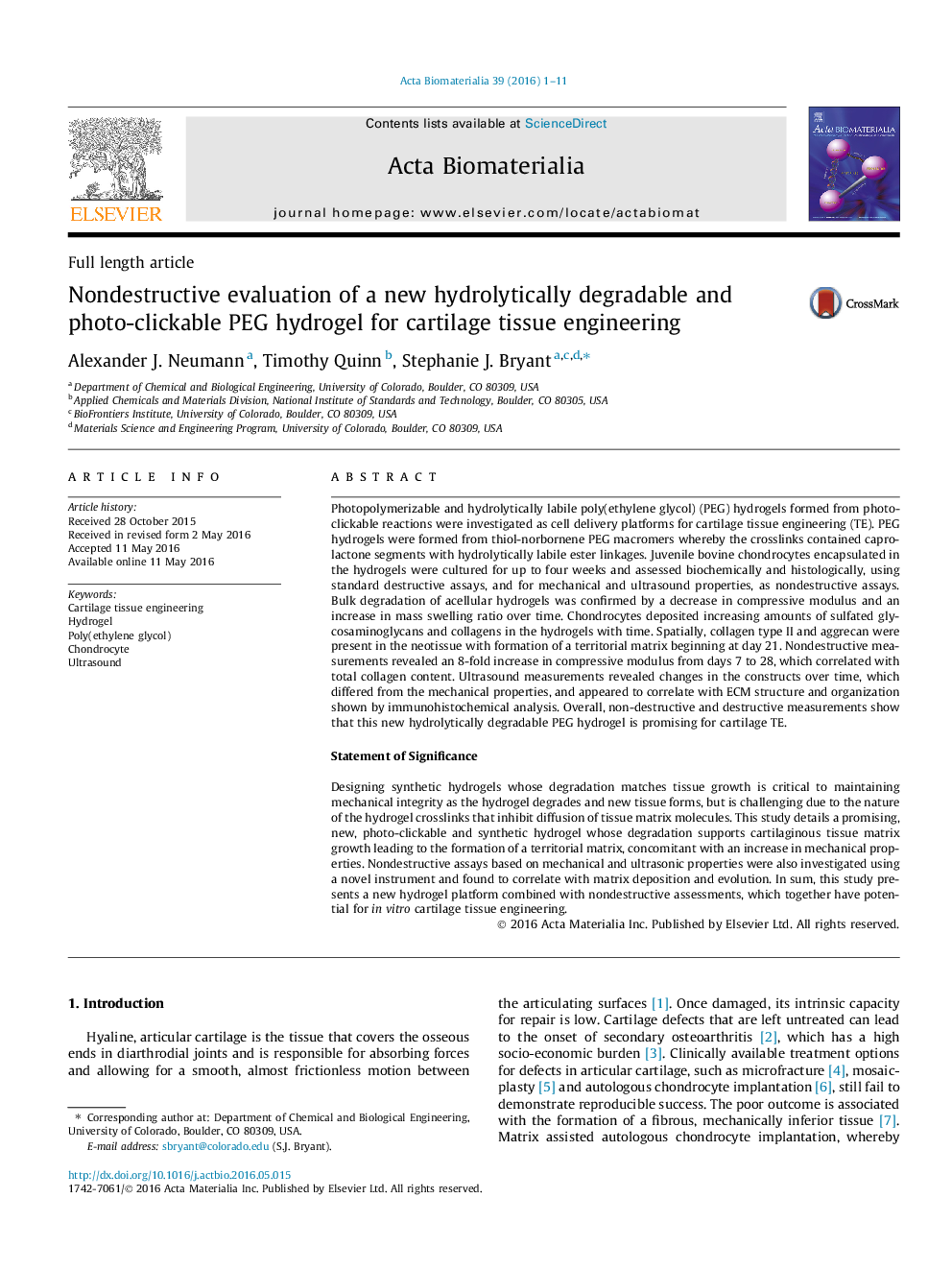 Photopolymerizable and hydrolytically labile poly(ethylene glycol) (PEG) hydrogels formed from photo-clickable reactions were investigated as cell delivery platforms for cartilage tissue engineering (TE). PEG hydrogels were formed from thiol-norbornene PEG macromers whereby the crosslinks contained caprolactone segments with hydrolytically labile ester linkages. Juvenile bovine chondrocytes encapsulated in the hydrogels were cultured for up to four weeks and assessed biochemically and histologically, using standard destructive assays, and for mechanical and ultrasound properties, as nondestructive assays. Bulk degradation of acellular hydrogels was confirmed by a decrease in compressive modulus and an increase in mass swelling ratio over time. Chondrocytes deposited increasing amounts of sulfated glycosaminoglycans and collagens in the hydrogels with time. Spatially, collagen type II and aggrecan were present in the neotissue with formation of a territorial matrix beginning at day 21. Nondestructive measurements revealed an 8-fold increase in compressive modulus from days 7 to 28, which correlated with total collagen content. Ultrasound measurements revealed changes in the constructs over time, which differed from the mechanical properties, and appeared to correlate with ECM structure and organization shown by immunohistochemical analysis. Overall, non-destructive and destructive measurements show that this new hydrolytically degradable PEG hydrogel is promising for cartilage TE.Statement of SignificanceDesigning synthetic hydrogels whose degradation matches tissue growth is critical to maintaining mechanical integrity as the hydrogel degrades and new tissue forms, but is challenging due to the nature of the hydrogel crosslinks that inhibit diffusion of tissue matrix molecules. This study details a promising, new, photo-clickable and synthetic hydrogel whose degradation supports cartilaginous tissue matrix growth leading to the formation of a territorial matrix, concomitant with an increase in mechanical properties. Nondestructive assays based on mechanical and ultrasonic properties were also investigated using a novel instrument and found to correlate with matrix deposition and evolution. In sum, this study presents a new hydrogel platform combined with nondestructive assessments, which together have potential for in vitro cartilage tissue engineering.