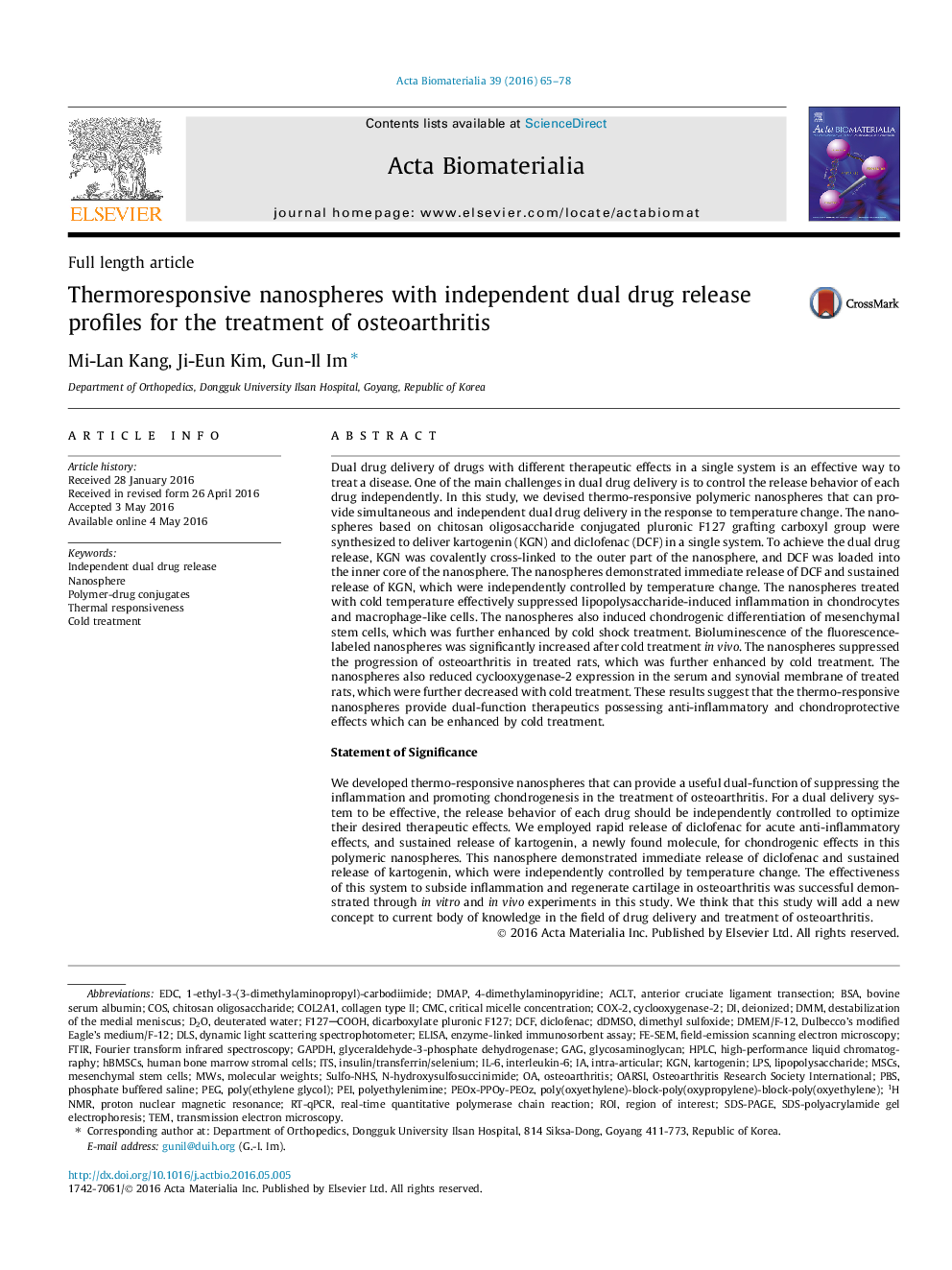 Dual drug delivery of drugs with different therapeutic effects in a single system is an effective way to treat a disease. One of the main challenges in dual drug delivery is to control the release behavior of each drug independently. In this study, we devised thermo-responsive polymeric nanospheres that can provide simultaneous and independent dual drug delivery in the response to temperature change. The nanospheres based on chitosan oligosaccharide conjugated pluronic F127 grafting carboxyl group were synthesized to deliver kartogenin (KGN) and diclofenac (DCF) in a single system. To achieve the dual drug release, KGN was covalently cross-linked to the outer part of the nanosphere, and DCF was loaded into the inner core of the nanosphere. The nanospheres demonstrated immediate release of DCF and sustained release of KGN, which were independently controlled by temperature change. The nanospheres treated with cold temperature effectively suppressed lipopolysaccharide-induced inflammation in chondrocytes and macrophage-like cells. The nanospheres also induced chondrogenic differentiation of mesenchymal stem cells, which was further enhanced by cold shock treatment. Bioluminescence of the fluorescence-labeled nanospheres was significantly increased after cold treatment in vivo. The nanospheres suppressed the progression of osteoarthritis in treated rats, which was further enhanced by cold treatment. The nanospheres also reduced cyclooxygenase-2 expression in the serum and synovial membrane of treated rats, which were further decreased with cold treatment. These results suggest that the thermo-responsive nanospheres provide dual-function therapeutics possessing anti-inflammatory and chondroprotective effects which can be enhanced by cold treatment.Statement of SignificanceWe developed thermo-responsive nanospheres that can provide a useful dual-function of suppressing the inflammation and promoting chondrogenesis in the treatment of osteoarthritis. For a dual delivery system to be effective, the release behavior of each drug should be independently controlled to optimize their desired therapeutic effects. We employed rapid release of diclofenac for acute anti-inflammatory effects, and sustained release of kartogenin, a newly found molecule, for chondrogenic effects in this polymeric nanospheres. This nanosphere demonstrated immediate release of diclofenac and sustained release of kartogenin, which were independently controlled by temperature change. The effectiveness of this system to subside inflammation and regenerate cartilage in osteoarthritis was successful demonstrated through in vitro and in vivo experiments in this study. We think that this study will add a new concept to current body of knowledge in the field of drug delivery and treatment of osteoarthritis.