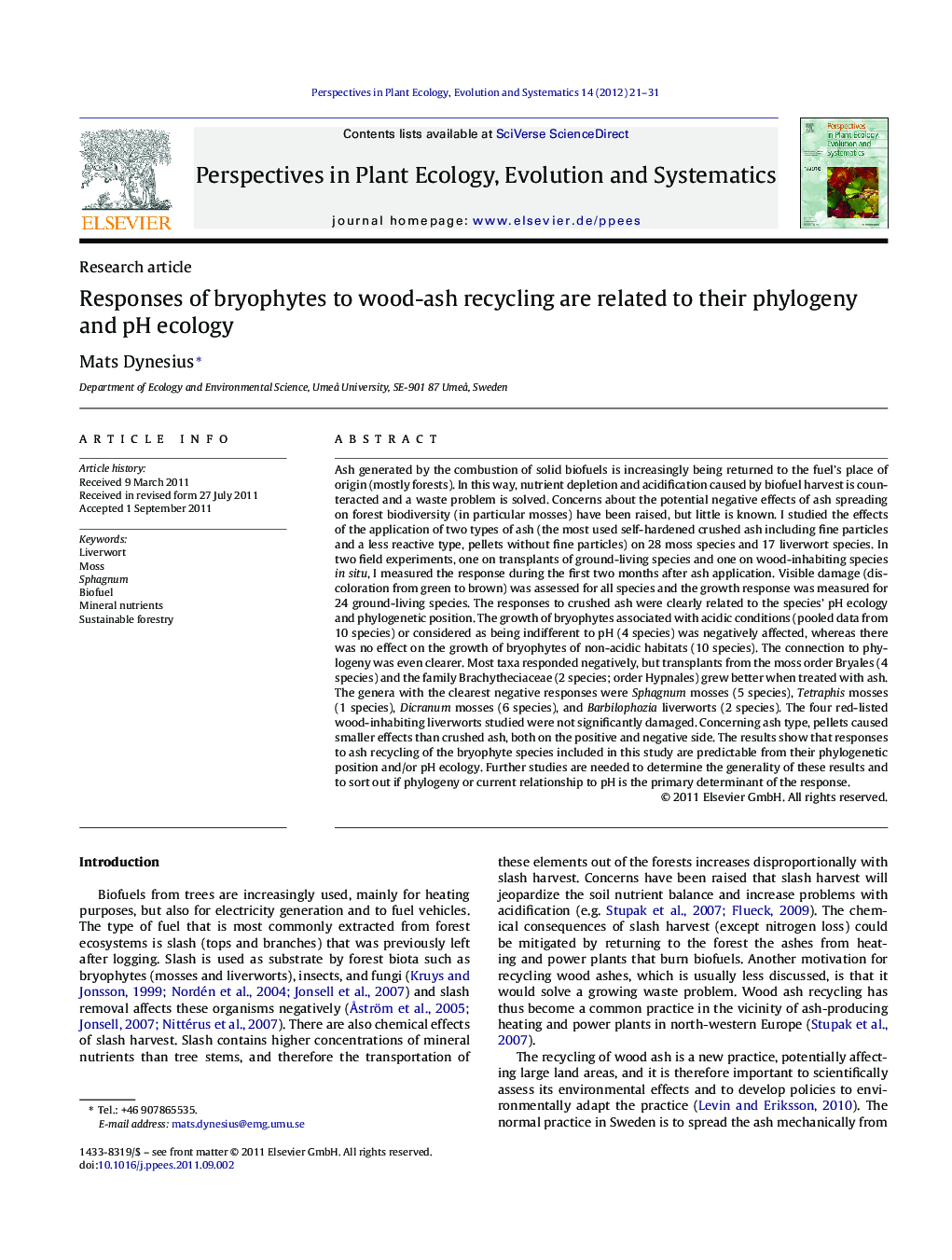 Ash generated by the combustion of solid biofuels is increasingly being returned to the fuel's place of origin (mostly forests). In this way, nutrient depletion and acidification caused by biofuel harvest is counteracted and a waste problem is solved. Concerns about the potential negative effects of ash spreading on forest biodiversity (in particular mosses) have been raised, but little is known. I studied the effects of the application of two types of ash (the most used self-hardened crushed ash including fine particles and a less reactive type, pellets without fine particles) on 28 moss species and 17 liverwort species. In two field experiments, one on transplants of ground-living species and one on wood-inhabiting species in situ, I measured the response during the first two months after ash application. Visible damage (discoloration from green to brown) was assessed for all species and the growth response was measured for 24 ground-living species. The responses to crushed ash were clearly related to the species’ pH ecology and phylogenetic position. The growth of bryophytes associated with acidic conditions (pooled data from 10 species) or considered as being indifferent to pH (4 species) was negatively affected, whereas there was no effect on the growth of bryophytes of non-acidic habitats (10 species). The connection to phylogeny was even clearer. Most taxa responded negatively, but transplants from the moss order Bryales (4 species) and the family Brachytheciaceae (2 species; order Hypnales) grew better when treated with ash. The genera with the clearest negative responses were Sphagnum mosses (5 species), Tetraphis mosses (1 species), Dicranum mosses (6 species), and Barbilophozia liverworts (2 species). The four red-listed wood-inhabiting liverworts studied were not significantly damaged. Concerning ash type, pellets caused smaller effects than crushed ash, both on the positive and negative side. The results show that responses to ash recycling of the bryophyte species included in this study are predictable from their phylogenetic position and/or pH ecology. Further studies are needed to determine the generality of these results and to sort out if phylogeny or current relationship to pH is the primary determinant of the response.