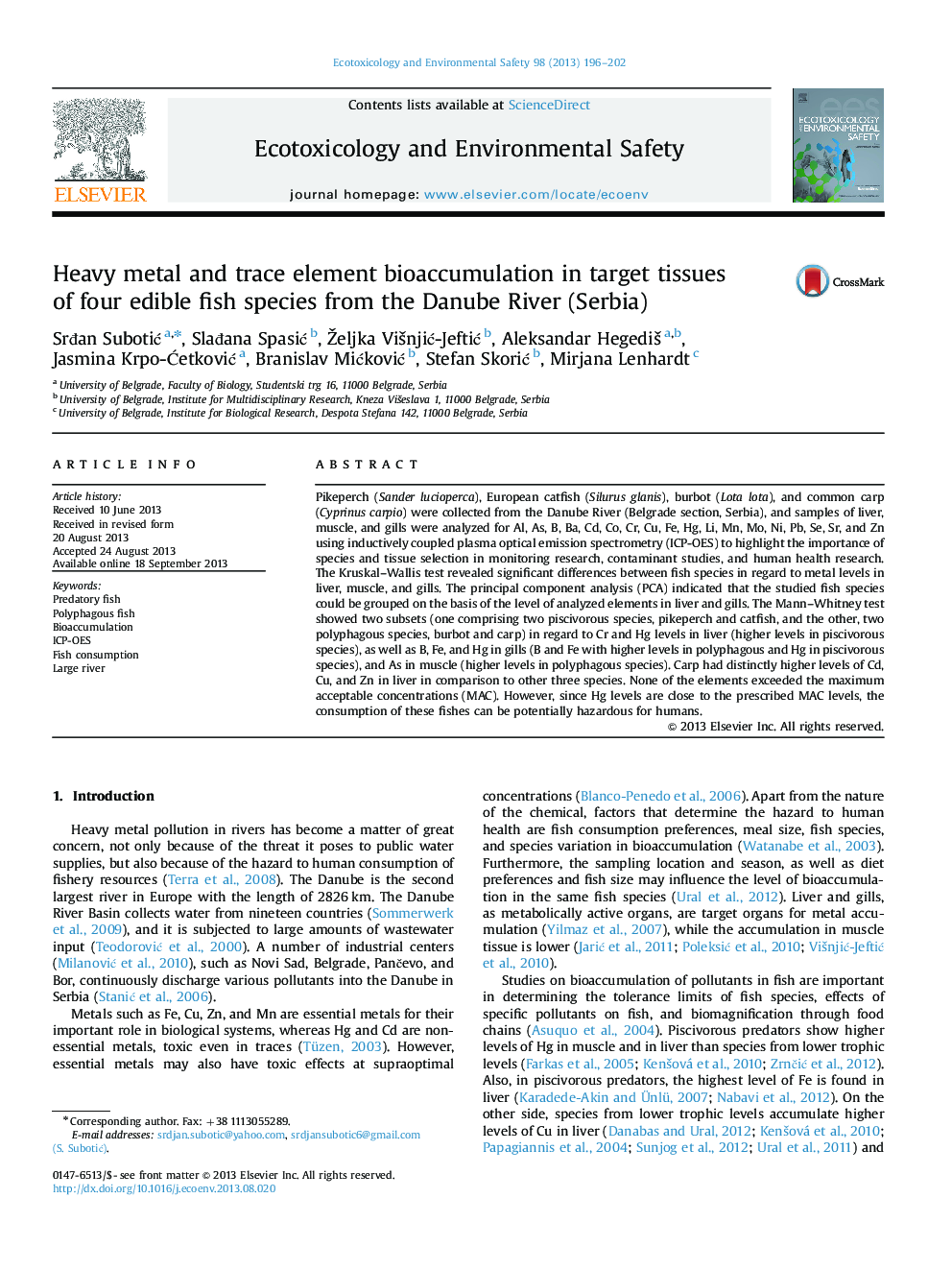 • Pikeperch, European catfish, burbot, and common carp from the Danube River were analyzed.
• The fishes were grouped based on the content of fifteen elements in liver and gills.
• Piscivores (pikeperch, catfish) formed one group, and polyphagous species (burbot, carp) another.
• Cr and Hg contents were higher in liver of piscivores.
• B and Fe contents were higher in gills of polyphagous species.

Pikeperch (Sander lucioperca), European catfish (Silurus glanis), burbot (Lota lota), and common carp (Cyprinus carpio) were collected from the Danube River (Belgrade section, Serbia), and samples of liver, muscle, and gills were analyzed for Al, As, B, Ba, Cd, Co, Cr, Cu, Fe, Hg, Li, Mn, Mo, Ni, Pb, Se, Sr, and Zn using inductively coupled plasma optical emission spectrometry (ICP-OES) to highlight the importance of species and tissue selection in monitoring research, contaminant studies, and human health research. The Kruskal–Wallis test revealed significant differences between fish species in regard to metal levels in liver, muscle, and gills. The principal component analysis (PCA) indicated that the studied fish species could be grouped on the basis of the level of analyzed elements in liver and gills. The Mann–Whitney test showed two subsets (one comprising two piscivorous species, pikeperch and catfish, and the other, two polyphagous species, burbot and carp) in regard to Cr and Hg levels in liver (higher levels in piscivorous species), as well as B, Fe, and Hg in gills (B and Fe with higher levels in polyphagous and Hg in piscivorous species), and As in muscle (higher levels in polyphagous species). Carp had distinctly higher levels of Cd, Cu, and Zn in liver in comparison to other three species. None of the elements exceeded the maximum acceptable concentrations (MAC). However, since Hg levels are close to the prescribed MAC levels, the consumption of these fishes can be potentially hazardous for humans.