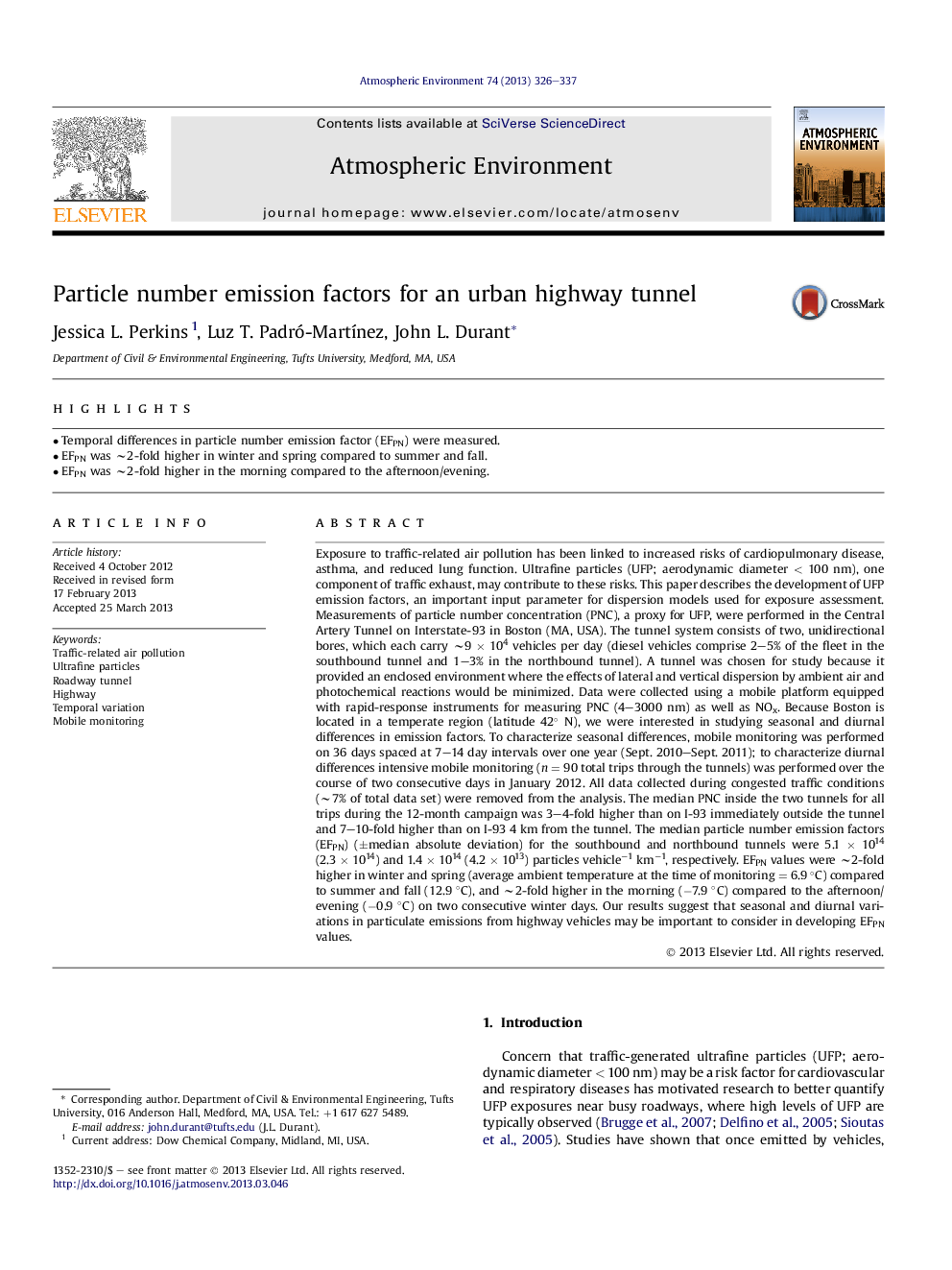 Exposure to traffic-related air pollution has been linked to increased risks of cardiopulmonary disease, asthma, and reduced lung function. Ultrafine particles (UFP; aerodynamic diameter < 100 nm), one component of traffic exhaust, may contribute to these risks. This paper describes the development of UFP emission factors, an important input parameter for dispersion models used for exposure assessment. Measurements of particle number concentration (PNC), a proxy for UFP, were performed in the Central Artery Tunnel on Interstate-93 in Boston (MA, USA). The tunnel system consists of two, unidirectional bores, which each carry ∼9 × 104 vehicles per day (diesel vehicles comprise 2–5% of the fleet in the southbound tunnel and 1–3% in the northbound tunnel). A tunnel was chosen for study because it provided an enclosed environment where the effects of lateral and vertical dispersion by ambient air and photochemical reactions would be minimized. Data were collected using a mobile platform equipped with rapid-response instruments for measuring PNC (4–3000 nm) as well as NOx. Because Boston is located in a temperate region (latitude 42° N), we were interested in studying seasonal and diurnal differences in emission factors. To characterize seasonal differences, mobile monitoring was performed on 36 days spaced at 7–14 day intervals over one year (Sept. 2010–Sept. 2011); to characterize diurnal differences intensive mobile monitoring (n = 90 total trips through the tunnels) was performed over the course of two consecutive days in January 2012. All data collected during congested traffic conditions (∼7% of total data set) were removed from the analysis. The median PNC inside the two tunnels for all trips during the 12-month campaign was 3–4-fold higher than on I-93 immediately outside the tunnel and 7–10-fold higher than on I-93 4 km from the tunnel. The median particle number emission factors (EFPN) (±median absolute deviation) for the southbound and northbound tunnels were 5.1 × 1014 (2.3 × 1014) and 1.4 × 1014 (4.2 × 1013) particles vehicle−1 km−1, respectively. EFPN values were ∼2-fold higher in winter and spring (average ambient temperature at the time of monitoring = 6.9 °C) compared to summer and fall (12.9 °C), and ∼2-fold higher in the morning (−7.9 °C) compared to the afternoon/evening (−0.9 °C) on two consecutive winter days. Our results suggest that seasonal and diurnal variations in particulate emissions from highway vehicles may be important to consider in developing EFPN values.