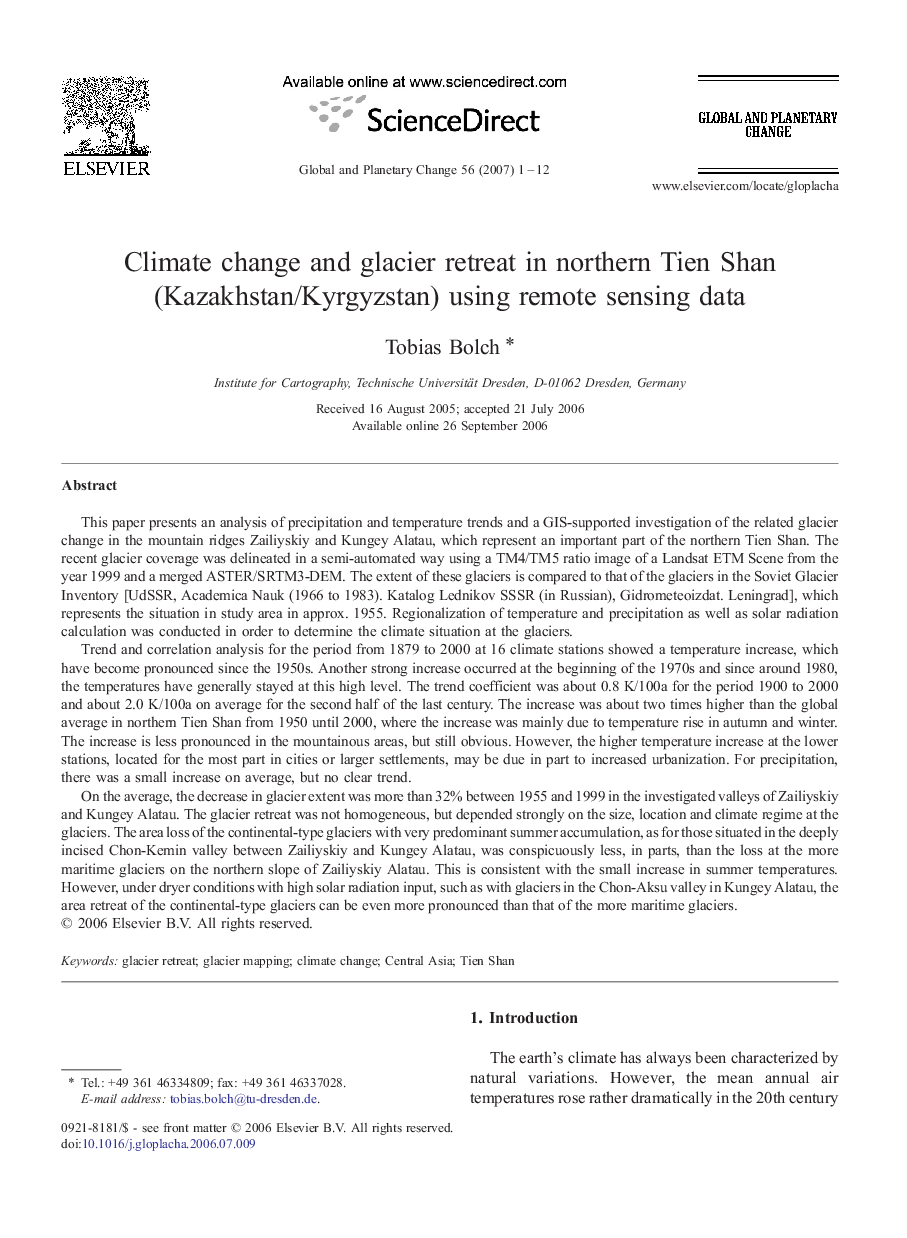 This paper presents an analysis of precipitation and temperature trends and a GIS-supported investigation of the related glacier change in the mountain ridges Zailiyskiy and Kungey Alatau, which represent an important part of the northern Tien Shan. The recent glacier coverage was delineated in a semi-automated way using a TM4/TM5 ratio image of a Landsat ETM Scene from the year 1999 and a merged ASTER/SRTM3-DEM. The extent of these glaciers is compared to that of the glaciers in the Soviet Glacier Inventory [UdSSR, Academica Nauk (1966 to 1983). Katalog Lednikov SSSR (in Russian), Gidrometeoizdat. Leningrad], which represents the situation in study area in approx. 1955. Regionalization of temperature and precipitation as well as solar radiation calculation was conducted in order to determine the climate situation at the glaciers.Trend and correlation analysis for the period from 1879 to 2000 at 16 climate stations showed a temperature increase, which have become pronounced since the 1950s. Another strong increase occurred at the beginning of the 1970s and since around 1980, the temperatures have generally stayed at this high level. The trend coefficient was about 0.8 K/100a for the period 1900 to 2000 and about 2.0 K/100a on average for the second half of the last century. The increase was about two times higher than the global average in northern Tien Shan from 1950 until 2000, where the increase was mainly due to temperature rise in autumn and winter. The increase is less pronounced in the mountainous areas, but still obvious. However, the higher temperature increase at the lower stations, located for the most part in cities or larger settlements, may be due in part to increased urbanization. For precipitation, there was a small increase on average, but no clear trend.On the average, the decrease in glacier extent was more than 32% between 1955 and 1999 in the investigated valleys of Zailiyskiy and Kungey Alatau. The glacier retreat was not homogeneous, but depended strongly on the size, location and climate regime at the glaciers. The area loss of the continental-type glaciers with very predominant summer accumulation, as for those situated in the deeply incised Chon-Kemin valley between Zailiyskiy and Kungey Alatau, was conspicuously less, in parts, than the loss at the more maritime glaciers on the northern slope of Zailiyskiy Alatau. This is consistent with the small increase in summer temperatures. However, under dryer conditions with high solar radiation input, such as with glaciers in the Chon-Aksu valley in Kungey Alatau, the area retreat of the continental-type glaciers can be even more pronounced than that of the more maritime glaciers.