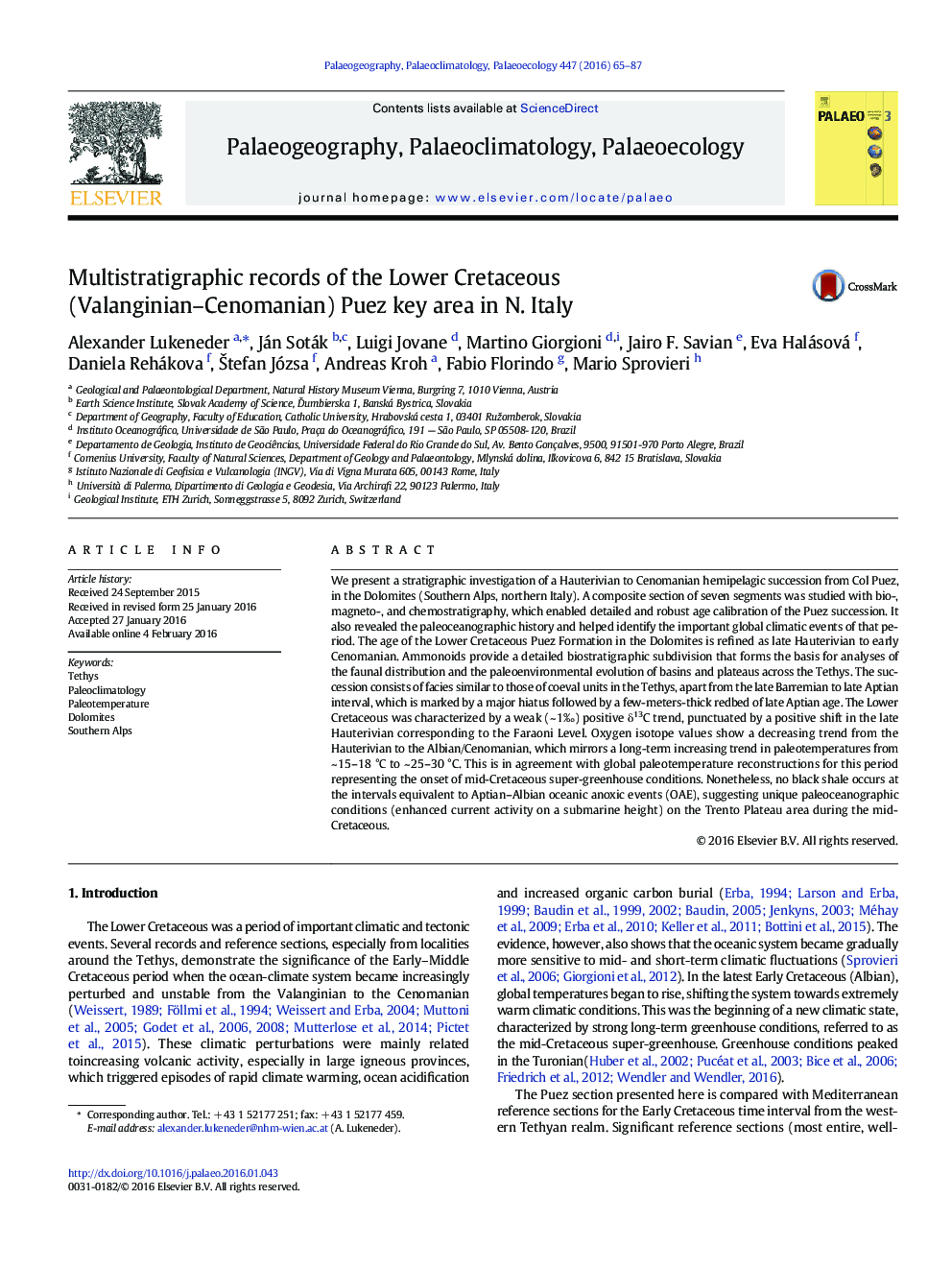 • The Lower Cretaceous Puez key section from the Southern Alps
• New geochemical, geophysical and biostratigraphic data for the Valanginian to Cenomanian
• Major Lower Cretaceous hemipelagic sedimentary and environmental changes
• Increasing trend in paleotemperature of around 7–10 °C for the Hauterivian to Albian/Cenomanian
• Paleogeographic scenarious for the Trento Plateau region in the Dolomites

We present a stratigraphic investigation of a Hauterivian to Cenomanian hemipelagic succession from Col Puez, in the Dolomites (Southern Alps, northern Italy). A composite section of seven segments was studied with bio-, magneto-, and chemostratigraphy, which enabled detailed and robust age calibration of the Puez succession. It also revealed the paleoceanographic history and helped identify the important global climatic events of that period. The age of the Lower Cretaceous Puez Formation in the Dolomites is refined as late Hauterivian to early Cenomanian. Ammonoids provide a detailed biostratigraphic subdivision that forms the basis for analyses of the faunal distribution and the paleoenvironmental evolution of basins and plateaus across the Tethys. The succession consists of facies similar to those of coeval units in the Tethys, apart from the late Barremian to late Aptian interval, which is marked by a major hiatus followed by a few-meters-thick redbed of late Aptian age. The Lower Cretaceous was characterized by a weak (~ 1‰) positive δ13C trend, punctuated by a positive shift in the late Hauterivian corresponding to the Faraoni Level. Oxygen isotope values show a decreasing trend from the Hauterivian to the Albian/Cenomanian, which mirrors a long-term increasing trend in paleotemperatures from ~ 15–18 °C to ~ 25–30 °C. This is in agreement with global paleotemperature reconstructions for this period representing the onset of mid-Cretaceous super-greenhouse conditions. Nonetheless, no black shale occurs at the intervals equivalent to Aptian–Albian oceanic anoxic events (OAE), suggesting unique paleoceanographic conditions (enhanced current activity on a submarine height) on the Trento Plateau area during the mid-Cretaceous.

Compilation of the data set for the Puez locality (logs P1–P7) with indicated geophysical and geochemical values and trends. The biostratigraphy is based on indicative nanno-, micro- and macrofossils from the compiled Puez key section (late Hauterivian to early Cenomanian). Paleomagnetic polarity chrons, sequence boundaries and sea level curves are combined with δ13C and δ18O (bulk rock) and the calculated paleotemperature.Figure optionsDownload high-quality image (191 K)Download as PowerPoint slide