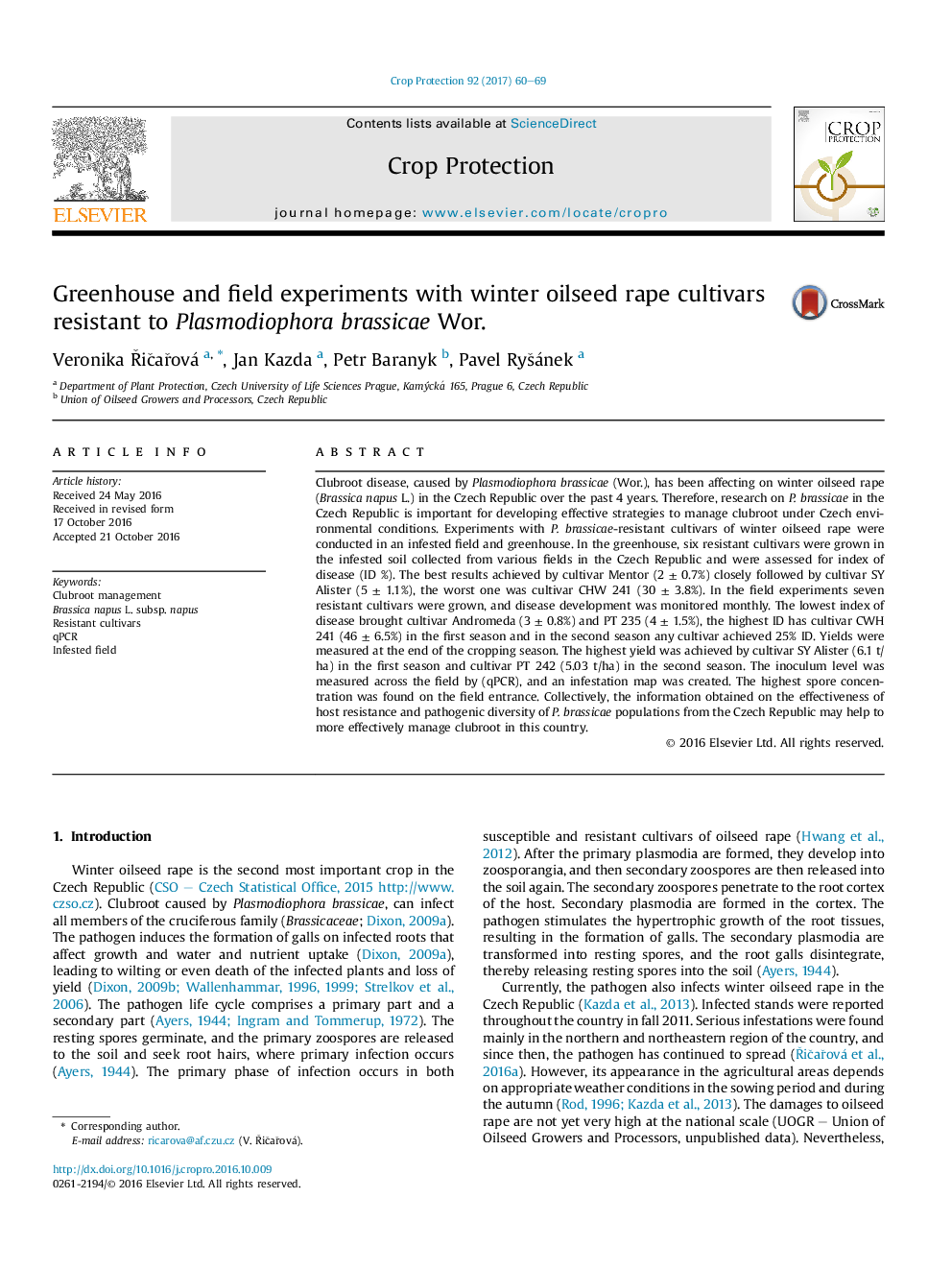 • Clubroot caused by Plasmodiophora brassicae Wor threatens oilseed rape in the Europe.
• Clubroot-resistant cultivars of oilseed rape were tested in a greenhouse and field.
• All cultivars, except one, showed good resistance and provided good yield.

Clubroot disease, caused by Plasmodiophora brassicae (Wor.), has been affecting on winter oilseed rape (Brassica napus L.) in the Czech Republic over the past 4 years. Therefore, research on P. brassicae in the Czech Republic is important for developing effective strategies to manage clubroot under Czech environmental conditions. Experiments with P. brassicae-resistant cultivars of winter oilseed rape were conducted in an infested field and greenhouse. In the greenhouse, six resistant cultivars were grown in the infested soil collected from various fields in the Czech Republic and were assessed for index of disease (ID %). The best results achieved by cultivar Mentor (2 ± 0.7%) closely followed by cultivar SY Alister (5 ± 1.1%), the worst one was cultivar CHW 241 (30 ± 3.8%). In the field experiments seven resistant cultivars were grown, and disease development was monitored monthly. The lowest index of disease brought cultivar Andromeda (3 ± 0.8%) and PT 235 (4 ± 1.5%), the highest ID has cultivar CWH 241 (46 ± 6.5%) in the first season and in the second season any cultivar achieved 25% ID. Yields were measured at the end of the cropping season. The highest yield was achieved by cultivar SY Alister (6.1 t/ha) in the first season and cultivar PT 242 (5.03 t/ha) in the second season. The inoculum level was measured across the field by (qPCR), and an infestation map was created. The highest spore concentration was found on the field entrance. Collectively, the information obtained on the effectiveness of host resistance and pathogenic diversity of P. brassicae populations from the Czech Republic may help to more effectively manage clubroot in this country.