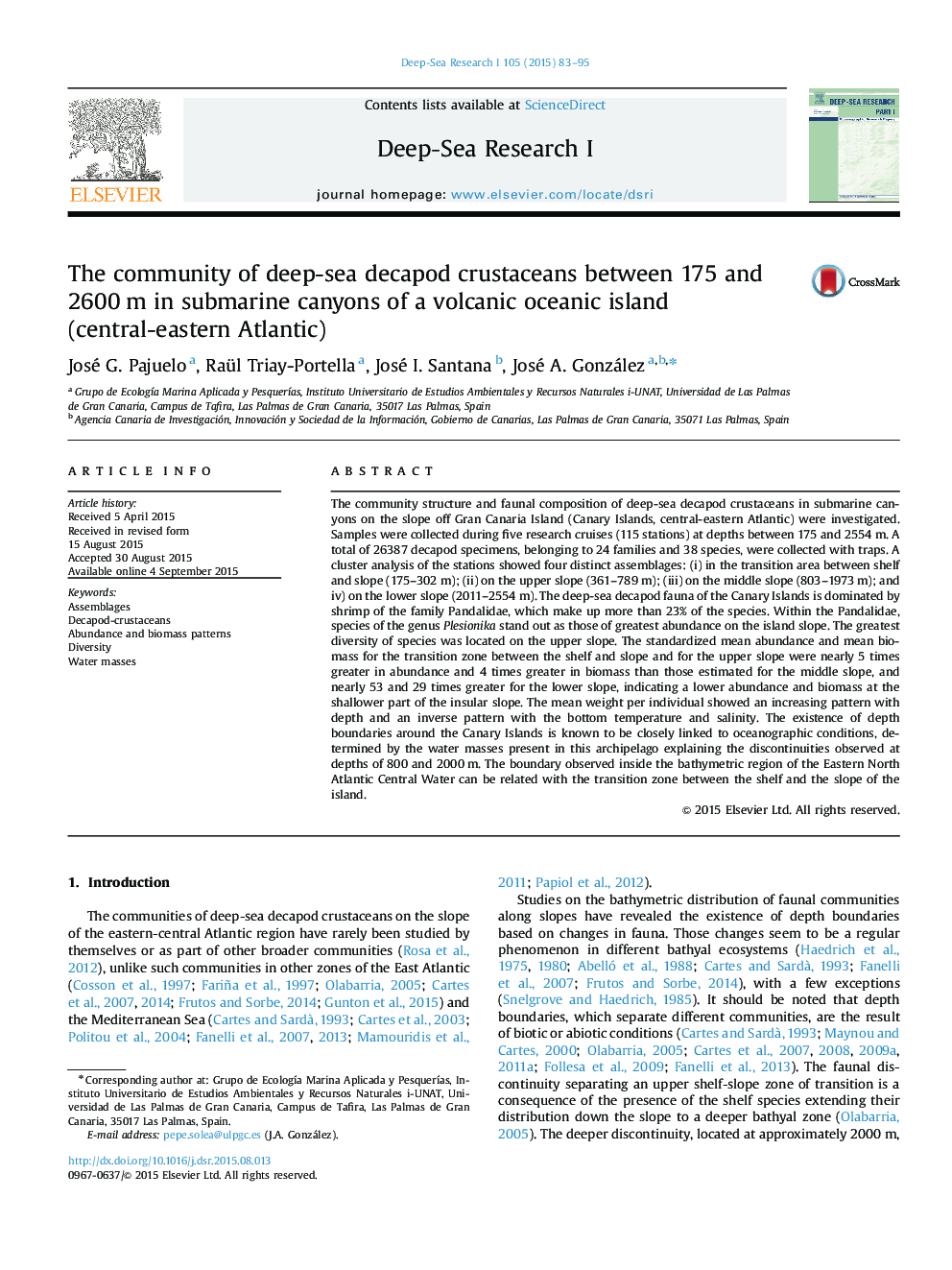 • Decapod crustacean community from submarine canyons is structured in four assemblages.
• Deep-sea decapod fauna is dominated by the shrimps of the family Pandalidae.
• Biomass and abundance decrease with depth.
• Depth boundaries are linked to local oceanographic conditions.

The community structure and faunal composition of deep-sea decapod crustaceans in submarine canyons on the slope off Gran Canaria Island (Canary Islands, central-eastern Atlantic) were investigated. Samples were collected during five research cruises (115 stations) at depths between 175 and 2554 m. A total of 26387 decapod specimens, belonging to 24 families and 38 species, were collected with traps. A cluster analysis of the stations showed four distinct assemblages: (i) in the transition area between shelf and slope (175–302 m); (ii) on the upper slope (361–789 m); (iii) on the middle slope (803–1973 m); and iv) on the lower slope (2011–2554 m). The deep-sea decapod fauna of the Canary Islands is dominated by shrimp of the family Pandalidae, which make up more than 23% of the species. Within the Pandalidae, species of the genus Plesionika stand out as those of greatest abundance on the island slope. The greatest diversity of species was located on the upper slope. The standardized mean abundance and mean biomass for the transition zone between the shelf and slope and for the upper slope were nearly 5 times greater in abundance and 4 times greater in biomass than those estimated for the middle slope, and nearly 53 and 29 times greater for the lower slope, indicating a lower abundance and biomass at the shallower part of the insular slope. The mean weight per individual showed an increasing pattern with depth and an inverse pattern with the bottom temperature and salinity. The existence of depth boundaries around the Canary Islands is known to be closely linked to oceanographic conditions, determined by the water masses present in this archipelago explaining the discontinuities observed at depths of 800 and 2000 m. The boundary observed inside the bathymetric region of the Eastern North Atlantic Central Water can be related with the transition zone between the shelf and the slope of the island.