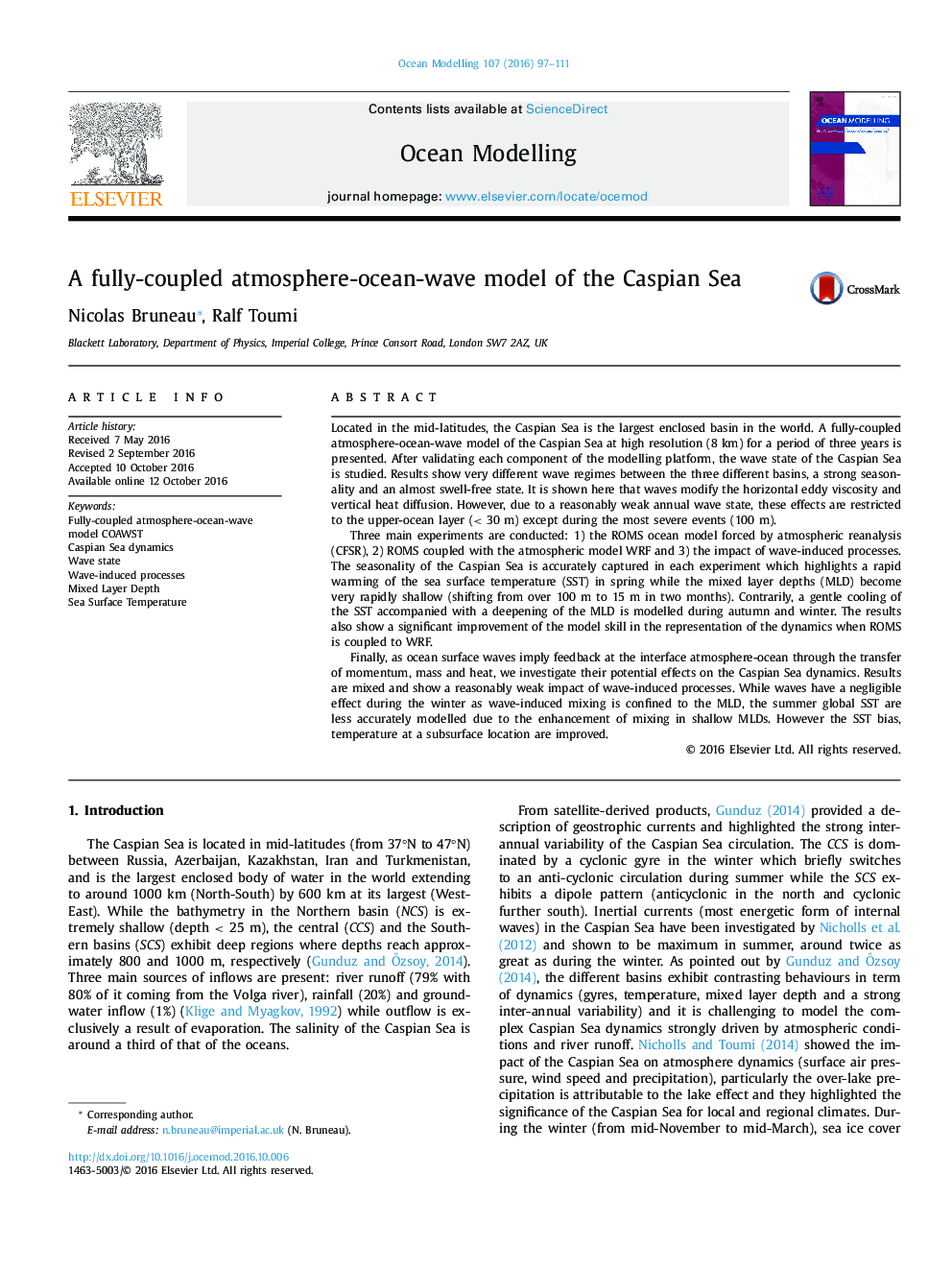 • Strong wave variability and seasonality between each regions.
• Severe wave events occur in central Caspian Sea; swell is not often present.
• Use of coupled ocean-atmosphere model significantly improves the results.
• MLD is highly variable between each region and between seasons.
• Impact of waves is reasonably weak and mixed results are obtained.

Located in the mid-latitudes, the Caspian Sea is the largest enclosed basin in the world. A fully-coupled atmosphere-ocean-wave model of the Caspian Sea at high resolution (8 km) for a period of three years is presented. After validating each component of the modelling platform, the wave state of the Caspian Sea is studied. Results show very different wave regimes between the three different basins, a strong seasonality and an almost swell-free state. It is shown here that waves modify the horizontal eddy viscosity and vertical heat diffusion. However, due to a reasonably weak annual wave state, these effects are restricted to the upper-ocean layer (< 30 m) except during the most severe events (100 m).Three main experiments are conducted: 1) the ROMS ocean model forced by atmospheric reanalysis (CFSR), 2) ROMS coupled with the atmospheric model WRF and 3) the impact of wave-induced processes. The seasonality of the Caspian Sea is accurately captured in each experiment which highlights a rapid warming of the sea surface temperature (SST) in spring while the mixed layer depths (MLD) become very rapidly shallow (shifting from over 100 m to 15 m in two months). Contrarily, a gentle cooling of the SST accompanied with a deepening of the MLD is modelled during autumn and winter. The results also show a significant improvement of the model skill in the representation of the dynamics when ROMS is coupled to WRF.Finally, as ocean surface waves imply feedback at the interface atmosphere-ocean through the transfer of momentum, mass and heat, we investigate their potential effects on the Caspian Sea dynamics. Results are mixed and show a reasonably weak impact of wave-induced processes. While waves have a negligible effect during the winter as wave-induced mixing is confined to the MLD, the summer global SST are less accurately modelled due to the enhancement of mixing in shallow MLDs. However the SST bias, temperature at a subsurface location are improved.