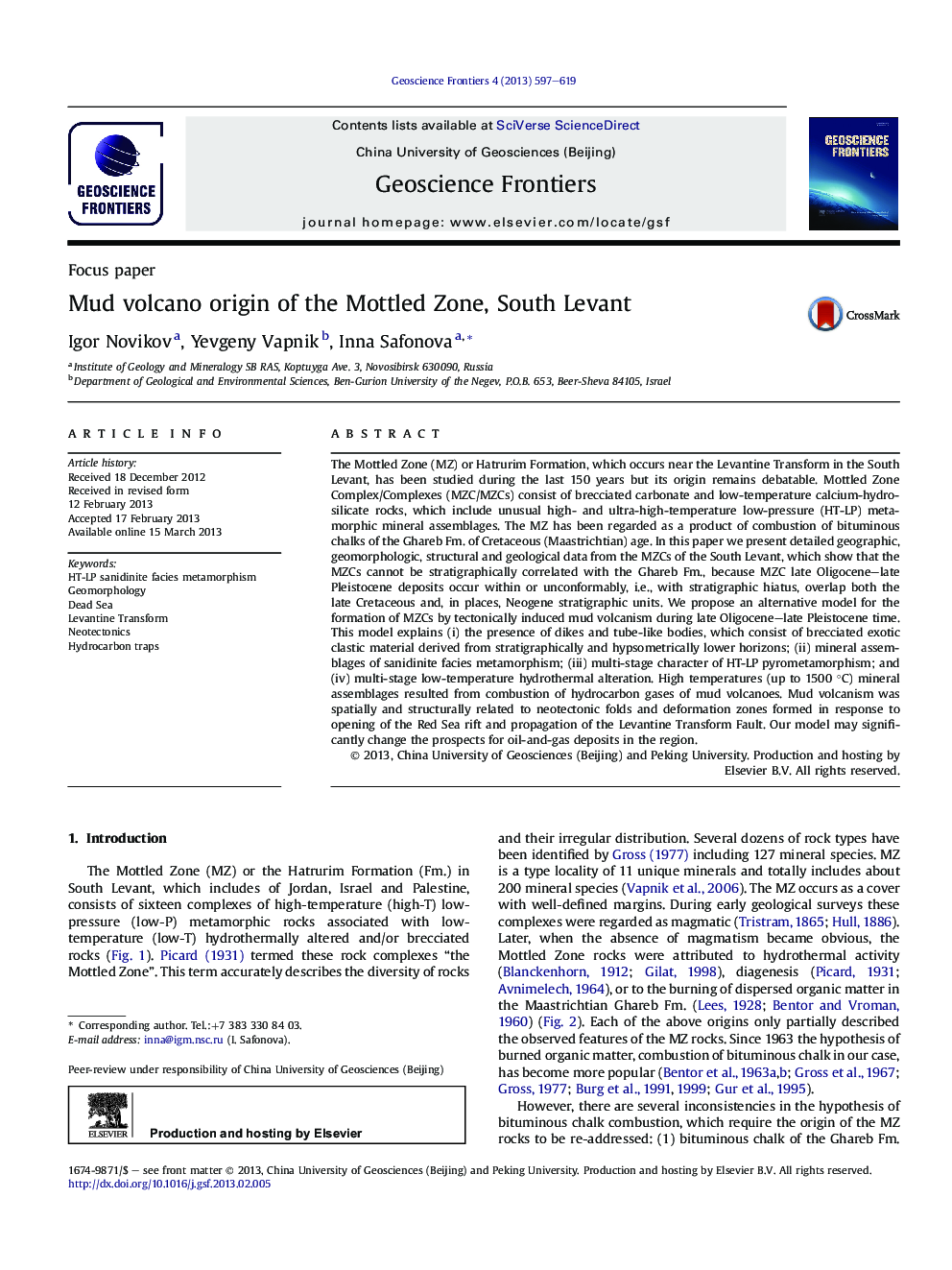 ► A new “mud volcano” model for the origin of the Mottled Zone in Levant is proposed.
► The mud volcanoes consist of metamorphic rocks formed by combustion of gases.
►  Abundant mud volcanism may reflect higher oil-and-gas potential of the region.

The Mottled Zone (MZ) or Hatrurim Formation, which occurs near the Levantine Transform in the South Levant, has been studied during the last 150 years but its origin remains debatable. Mottled Zone Complex/Complexes (MZC/MZCs) consist of brecciated carbonate and low-temperature calcium-hydrosilicate rocks, which include unusual high- and ultra-high-temperature low-pressure (HT-LP) metamorphic mineral assemblages. The MZ has been regarded as a product of combustion of bituminous chalks of the Ghareb Fm. of Cretaceous (Maastrichtian) age. In this paper we present detailed geographic, geomorphologic, structural and geological data from the MZCs of the South Levant, which show that the MZCs cannot be stratigraphically correlated with the Ghareb Fm., because MZC late Oligocene–late Pleistocene deposits occur within or unconformably, i.e., with stratigraphic hiatus, overlap both the late Cretaceous and, in places, Neogene stratigraphic units. We propose an alternative model for the formation of MZCs by tectonically induced mud volcanism during late Oligocene–late Pleistocene time. This model explains (i) the presence of dikes and tube-like bodies, which consist of brecciated exotic clastic material derived from stratigraphically and hypsometrically lower horizons; (ii) mineral assemblages of sanidinite facies metamorphism; (iii) multi-stage character of HT-LP pyrometamorphism; and (iv) multi-stage low-temperature hydrothermal alteration. High temperatures (up to 1500 °C) mineral assemblages resulted from combustion of hydrocarbon gases of mud volcanoes. Mud volcanism was spatially and structurally related to neotectonic folds and deformation zones formed in response to opening of the Red Sea rift and propagation of the Levantine Transform Fault. Our model may significantly change the prospects for oil-and-gas deposits in the region.