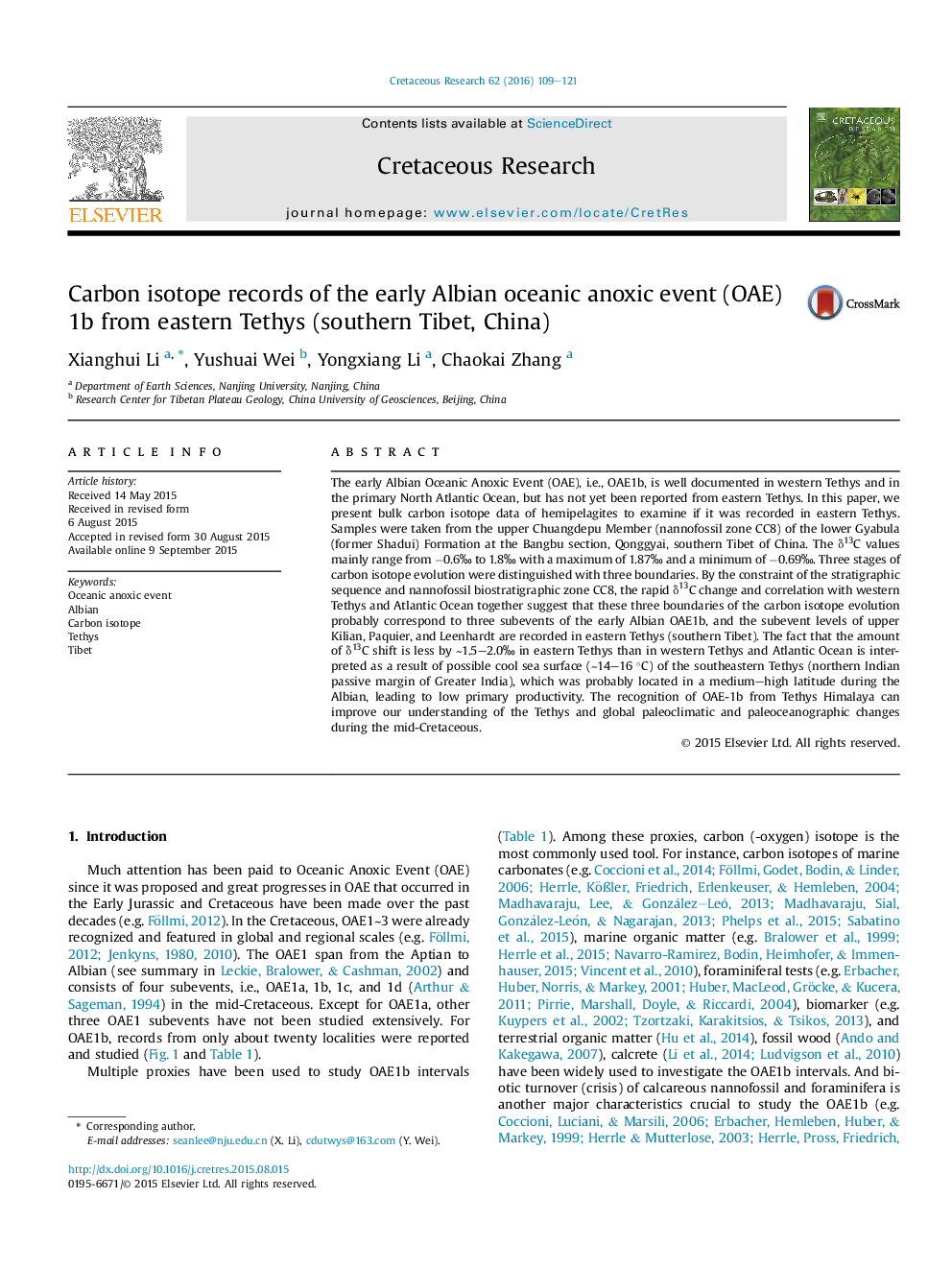 • We analyzed carbon isotopes of early Albian hemipelagite in southern Tibet.
• Three subevent levels of OAE 1b were recognized.
• Light δ13C values were attributed to cool-cold sea water in southeastern Tethys.
• It improves understanding of Tethys/global paleoclimate during greenhouse Mid-Cretaceous.

The early Albian Oceanic Anoxic Event (OAE), i.e., OAE1b, is well documented in western Tethys and in the primary North Atlantic Ocean, but has not yet been reported from eastern Tethys. In this paper, we present bulk carbon isotope data of hemipelagites to examine if it was recorded in eastern Tethys. Samples were taken from the upper Chuangdepu Member (nannofossil zone CC8) of the lower Gyabula (former Shadui) Formation at the Bangbu section, Qonggyai, southern Tibet of China. The δ13C values mainly range from −0.6‰ to 1.8‰ with a maximum of 1.87‰ and a minimum of −0.69‰. Three stages of carbon isotope evolution were distinguished with three boundaries. By the constraint of the stratigraphic sequence and nannofossil biostratigraphic zone CC8, the rapid δ13C change and correlation with western Tethys and Atlantic Ocean together suggest that these three boundaries of the carbon isotope evolution probably correspond to three subevents of the early Albian OAE1b, and the subevent levels of upper Kilian, Paquier, and Leenhardt are recorded in eastern Tethys (southern Tibet). The fact that the amount of δ13C shift is less by ∼1.5–2.0‰ in eastern Tethys than in western Tethys and Atlantic Ocean is interpreted as a result of possible cool sea surface (∼14–16 °C) of the southeastern Tethys (northern Indian passive margin of Greater India), which was probably located in a medium–high latitude during the Albian, leading to low primary productivity. The recognition of OAE-1b from Tethys Himalaya can improve our understanding of the Tethys and global paleoclimatic and paleoceanographic changes during the mid-Cretaceous.