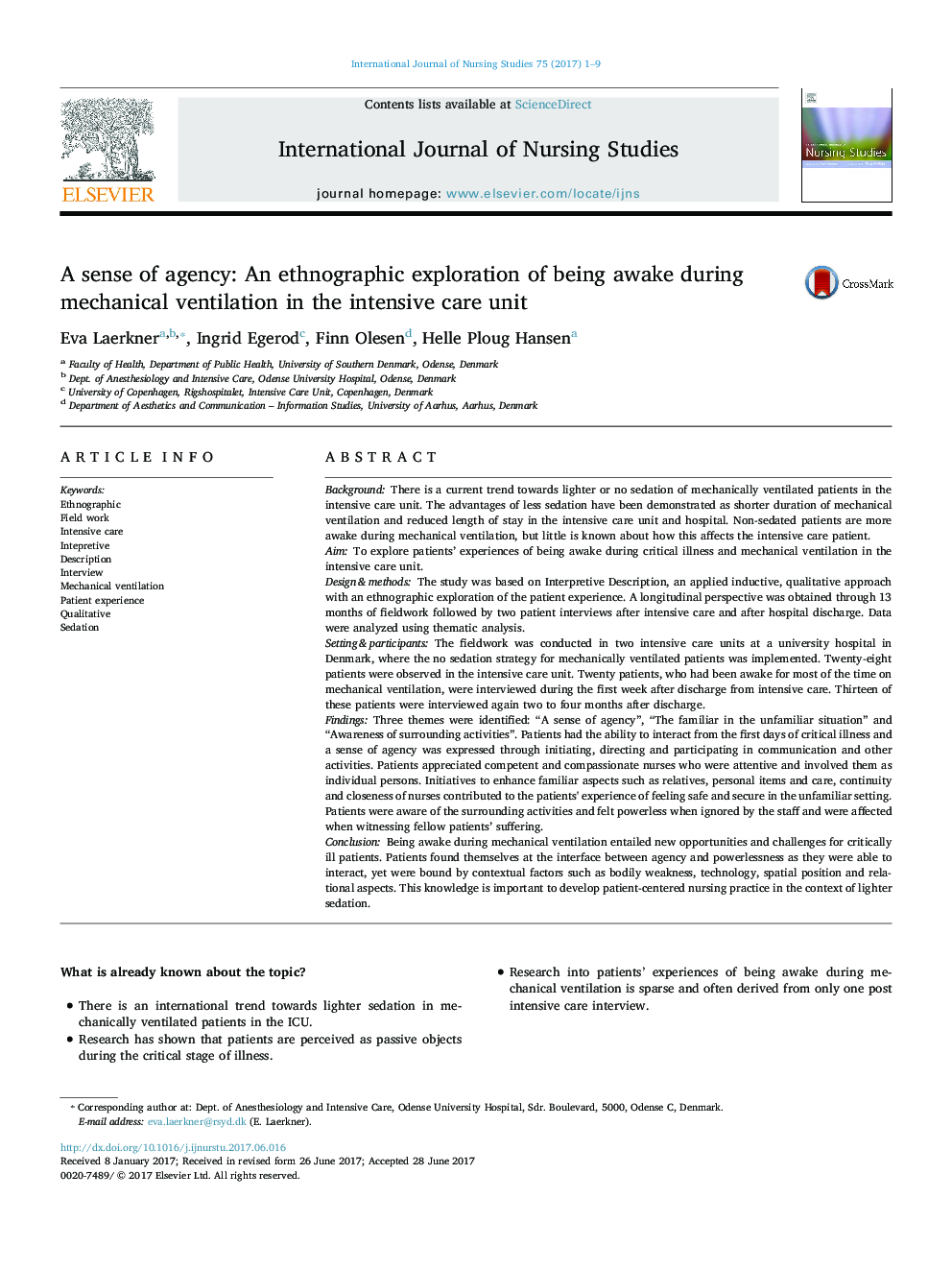 BackgroundThere is a current trend towards lighter or no sedation of mechanically ventilated patients in the intensive care unit. The advantages of less sedation have been demonstrated as shorter duration of mechanical ventilation and reduced length of stay in the intensive care unit and hospital. Non-sedated patients are more awake during mechanical ventilation, but little is known about how this affects the intensive care patient.AimTo explore patients' experiences of being awake during critical illness and mechanical ventilation in the intensive care unit.Design & methodsThe study was based on Interpretive Description, an applied inductive, qualitative approach with an ethnographic exploration of the patient experience. A longitudinal perspective was obtained through 13 months of fieldwork followed by two patient interviews after intensive care and after hospital discharge. Data were analyzed using thematic analysis.Setting & participantsThe fieldwork was conducted in two intensive care units at a university hospital in Denmark, where the no sedation strategy for mechanically ventilated patients was implemented. Twenty-eight patients were observed in the intensive care unit. Twenty patients, who had been awake for most of the time on mechanical ventilation, were interviewed during the first week after discharge from intensive care. Thirteen of these patients were interviewed again two to four months after discharge.FindingsThree themes were identified: “A sense of agency”, “The familiar in the unfamiliar situation” and “Awareness of surrounding activities”. Patients had the ability to interact from the first days of critical illness and a sense of agency was expressed through initiating, directing and participating in communication and other activities. Patients appreciated competent and compassionate nurses who were attentive and involved them as individual persons. Initiatives to enhance familiar aspects such as relatives, personal items and care, continuity and closeness of nurses contributed to the patients' experience of feeling safe and secure in the unfamiliar setting. Patients were aware of the surrounding activities and felt powerless when ignored by the staff and were affected when witnessing fellow patients' suffering.ConclusionBeing awake during mechanical ventilation entailed new opportunities and challenges for critically ill patients. Patients found themselves at the interface between agency and powerlessness as they were able to interact, yet were bound by contextual factors such as bodily weakness, technology, spatial position and relational aspects. This knowledge is important to develop patient-centered nursing practice in the context of lighter sedation.