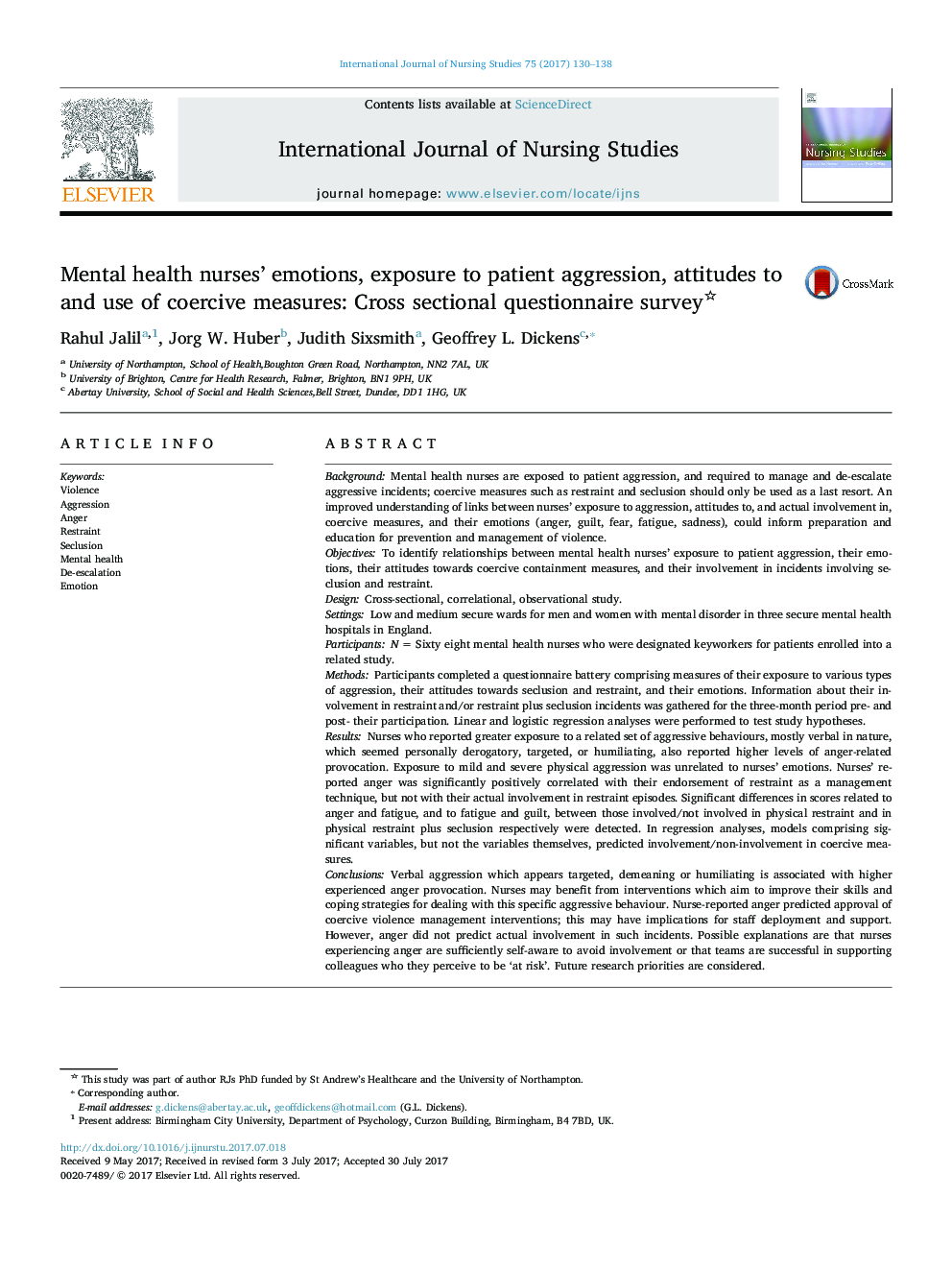 BackgroundMental health nurses are exposed to patient aggression, and required to manage and de-escalate aggressive incidents; coercive measures such as restraint and seclusion should only be used as a last resort. An improved understanding of links between nurses' exposure to aggression, attitudes to, and actual involvement in, coercive measures, and their emotions (anger, guilt, fear, fatigue, sadness), could inform preparation and education for prevention and management of violence.ObjectivesTo identify relationships between mental health nurses' exposure to patient aggression, their emotions, their attitudes towards coercive containment measures, and their involvement in incidents involving seclusion and restraint.DesignCross-sectional, correlational, observational study.SettingsLow and medium secure wards for men and women with mental disorder in three secure mental health hospitals in England.ParticipantsNÂ =Â Sixty eight mental health nurses who were designated keyworkers for patients enrolled into a related study.MethodsParticipants completed a questionnaire battery comprising measures of their exposure to various types of aggression, their attitudes towards seclusion and restraint, and their emotions. Information about their involvement in restraint and/or restraint plus seclusion incidents was gathered for the three-month period pre- and post- their participation. Linear and logistic regression analyses were performed to test study hypotheses.ResultsNurses who reported greater exposure to a related set of aggressive behaviours, mostly verbal in nature, which seemed personally derogatory, targeted, or humiliating, also reported higher levels of anger-related provocation. Exposure to mild and severe physical aggression was unrelated to nurses' emotions. Nurses' reported anger was significantly positively correlated with their endorsement of restraint as a management technique, but not with their actual involvement in restraint episodes. Significant differences in scores related to anger and fatigue, and to fatigue and guilt, between those involved/not involved in physical restraint and in physical restraint plus seclusion respectively were detected. In regression analyses, models comprising significant variables, but not the variables themselves, predicted involvement/non-involvement in coercive measures.ConclusionsVerbal aggression which appears targeted, demeaning or humiliating is associated with higher experienced anger provocation. Nurses may benefit from interventions which aim to improve their skills and coping strategies for dealing with this specific aggressive behaviour. Nurse-reported anger predicted approval of coercive violence management interventions; this may have implications for staff deployment and support. However, anger did not predict actual involvement in such incidents. Possible explanations are that nurses experiencing anger are sufficiently self-aware to avoid involvement or that teams are successful in supporting colleagues who they perceive to be 'at risk'. Future research priorities are considered.