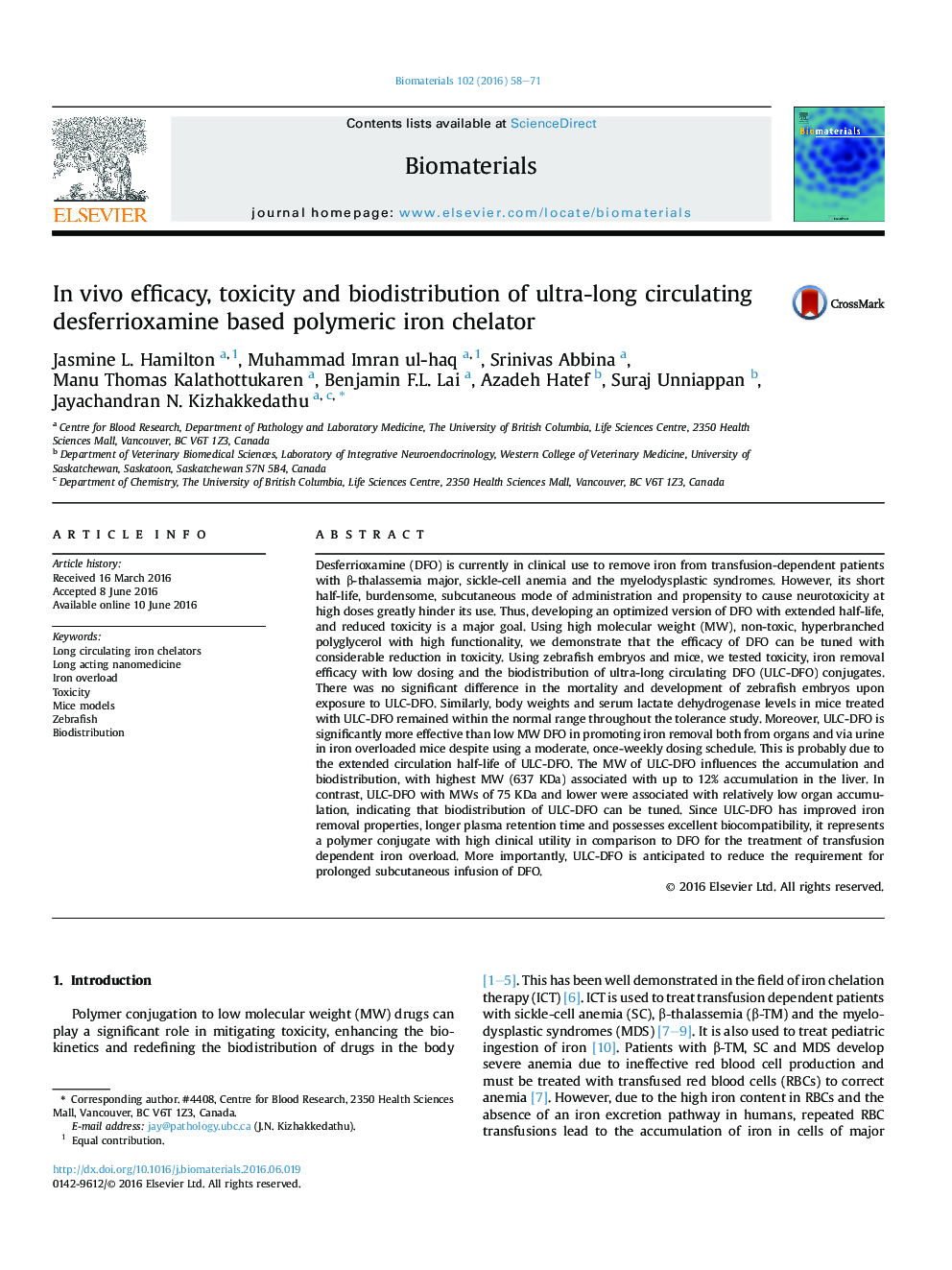 Desferrioxamine (DFO) is currently in clinical use to remove iron from transfusion-dependent patients with β-thalassemia major, sickle-cell anemia and the myelodysplastic syndromes. However, its short half-life, burdensome, subcutaneous mode of administration and propensity to cause neurotoxicity at high doses greatly hinder its use. Thus, developing an optimized version of DFO with extended half-life, and reduced toxicity is a major goal. Using high molecular weight (MW), non-toxic, hyperbranched polyglycerol with high functionality, we demonstrate that the efficacy of DFO can be tuned with considerable reduction in toxicity. Using zebrafish embryos and mice, we tested toxicity, iron removal efficacy with low dosing and the biodistribution of ultra-long circulating DFO (ULC-DFO) conjugates. There was no significant difference in the mortality and development of zebrafish embryos upon exposure to ULC-DFO. Similarly, body weights and serum lactate dehydrogenase levels in mice treated with ULC-DFO remained within the normal range throughout the tolerance study. Moreover, ULC-DFO is significantly more effective than low MW DFO in promoting iron removal both from organs and via urine in iron overloaded mice despite using a moderate, once-weekly dosing schedule. This is probably due to the extended circulation half-life of ULC-DFO. The MW of ULC-DFO influences the accumulation and biodistribution, with highest MW (637 KDa) associated with up to 12% accumulation in the liver. In contrast, ULC-DFO with MWs of 75 KDa and lower were associated with relatively low organ accumulation, indicating that biodistribution of ULC-DFO can be tuned. Since ULC-DFO has improved iron removal properties, longer plasma retention time and possesses excellent biocompatibility, it represents a polymer conjugate with high clinical utility in comparison to DFO for the treatment of transfusion dependent iron overload. More importantly, ULC-DFO is anticipated to reduce the requirement for prolonged subcutaneous infusion of DFO.