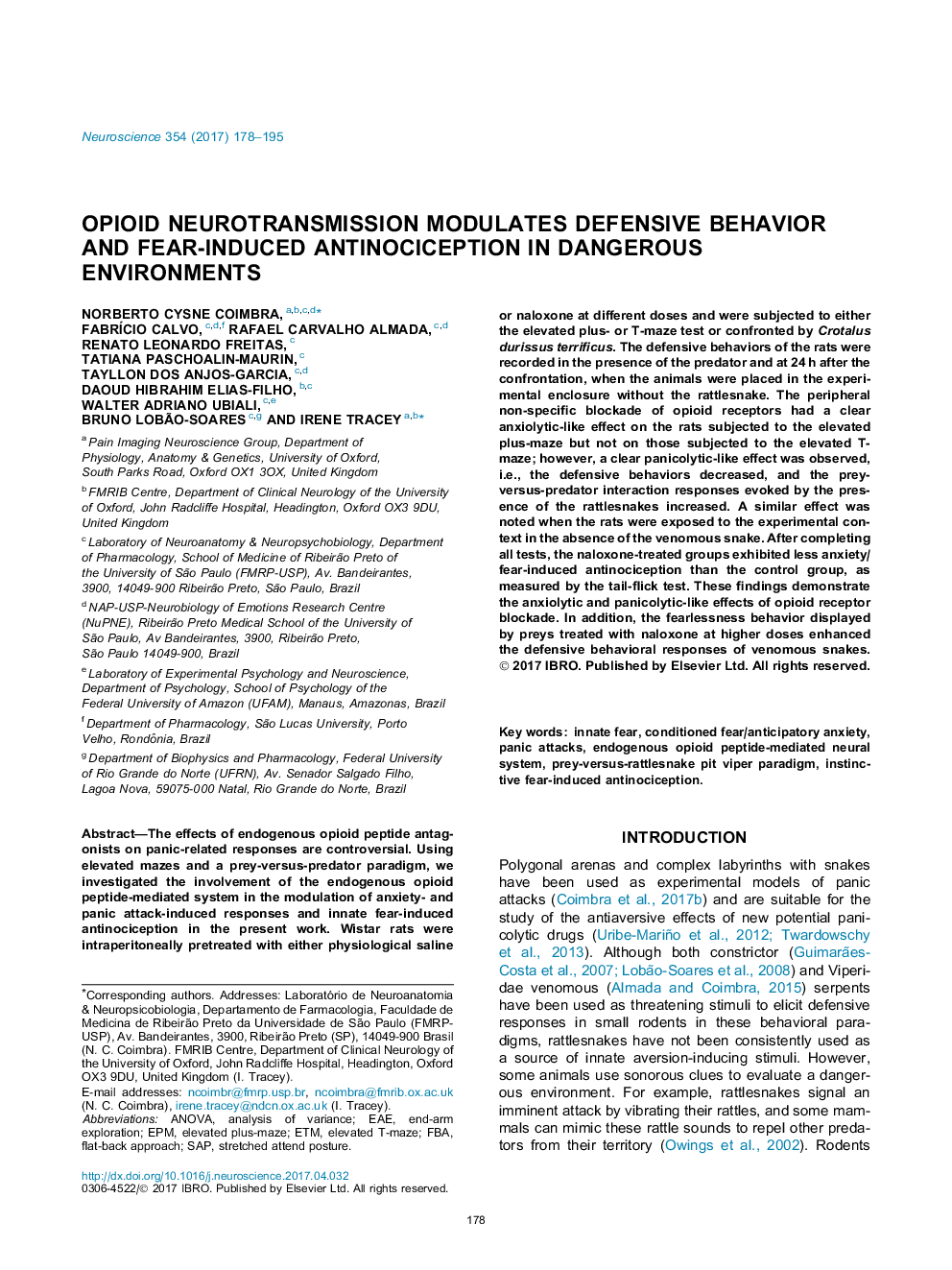 The effects of endogenous opioid peptide antagonists on panic-related responses are controversial. Using elevated mazes and a prey-versus-predator paradigm, we investigated the involvement of the endogenous opioid peptide-mediated system in the modulation of anxiety- and panic attack-induced responses and innate fear-induced antinociception in the present work. Wistar rats were intraperitoneally pretreated with either physiological saline or naloxone at different doses and were subjected to either the elevated plus- or T-maze test or confronted by Crotalus durissus terrificus. The defensive behaviors of the rats were recorded in the presence of the predator and at 24Â h after the confrontation, when the animals were placed in the experimental enclosure without the rattlesnake. The peripheral non-specific blockade of opioid receptors had a clear anxiolytic-like effect on the rats subjected to the elevated plus-maze but not on those subjected to the elevated T-maze; however, a clear panicolytic-like effect was observed, i.e., the defensive behaviors decreased, and the prey-versus-predator interaction responses evoked by the presence of the rattlesnakes increased. A similar effect was noted when the rats were exposed to the experimental context in the absence of the venomous snake. After completing all tests, the naloxone-treated groups exhibited less anxiety/fear-induced antinociception than the control group, as measured by the tail-flick test. These findings demonstrate the anxiolytic and panicolytic-like effects of opioid receptor blockade. In addition, the fearlessness behavior displayed by preys treated with naloxone at higher doses enhanced the defensive behavioral responses of venomous snakes.

Panic attack-like behavioral responses displayed by Wistar rats threatened by Crotalus durissus terrificus (Reptilia, Viperidae) wild venomous snakes are reverted to fearlessness by the peripheral treatment with naloxone. Background: Photomicrograph of a transverse section of the dorsal midbrain of a Wistar rat showing a fast blue neurotracer-labeled neuron situated in the dorsolateral column of the periaqueductal gray matter, which is rich in opioid peptide neurons and receptors.161