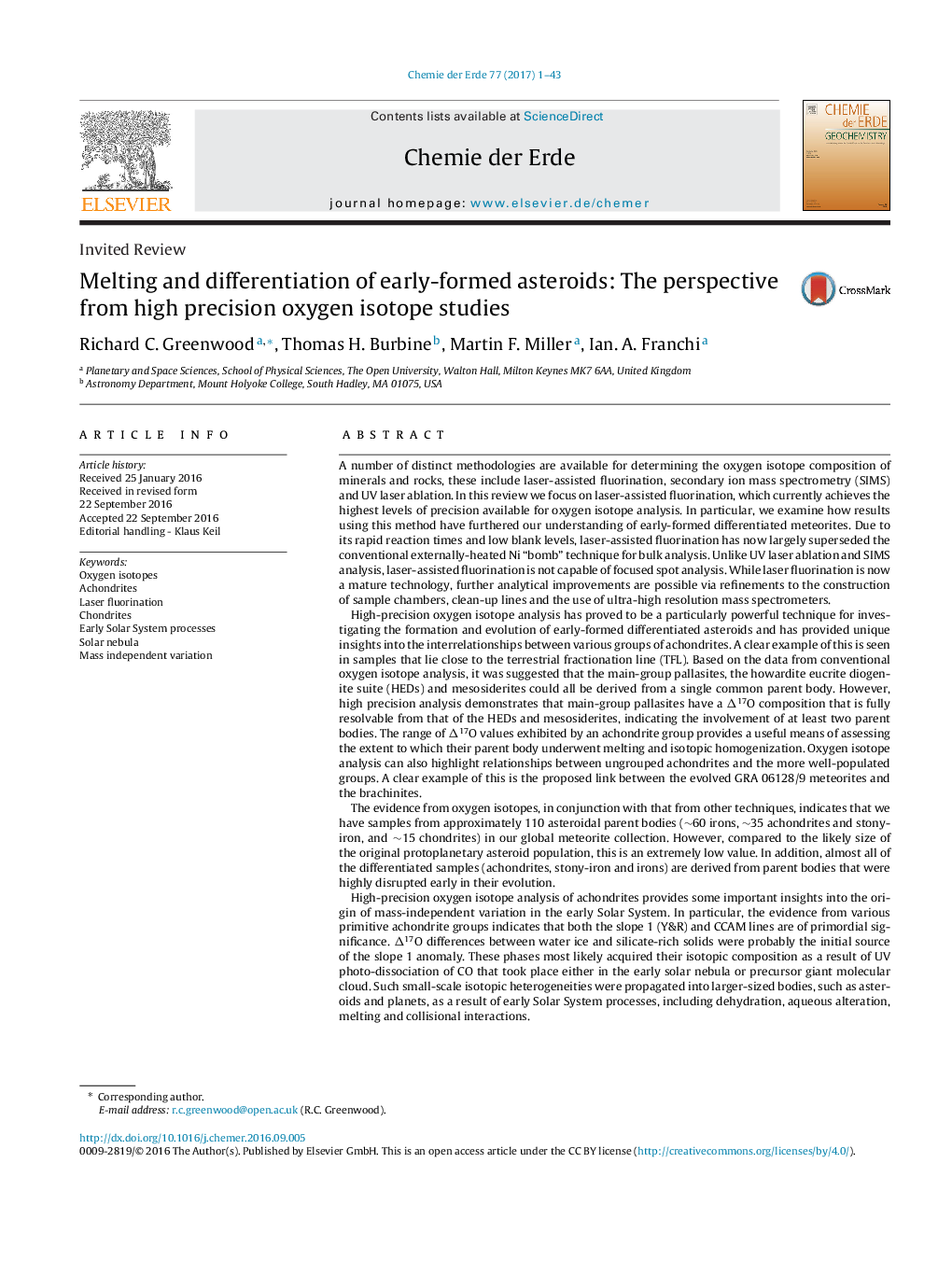 A number of distinct methodologies are available for determining the oxygen isotope composition of minerals and rocks, these include laser-assisted fluorination, secondary ion mass spectrometry (SIMS) and UV laser ablation. In this review we focus on laser-assisted fluorination, which currently achieves the highest levels of precision available for oxygen isotope analysis. In particular, we examine how results using this method have furthered our understanding of early-formed differentiated meteorites. Due to its rapid reaction times and low blank levels, laser-assisted fluorination has now largely superseded the conventional externally-heated Ni “bomb” technique for bulk analysis. Unlike UV laser ablation and SIMS analysis, laser-assisted fluorination is not capable of focused spot analysis. While laser fluorination is now a mature technology, further analytical improvements are possible via refinements to the construction of sample chambers, clean-up lines and the use of ultra-high resolution mass spectrometers.High-precision oxygen isotope analysis has proved to be a particularly powerful technique for investigating the formation and evolution of early-formed differentiated asteroids and has provided unique insights into the interrelationships between various groups of achondrites. A clear example of this is seen in samples that lie close to the terrestrial fractionation line (TFL). Based on the data from conventional oxygen isotope analysis, it was suggested that the main-group pallasites, the howardite eucrite diogenite suite (HEDs) and mesosiderites could all be derived from a single common parent body. However, high precision analysis demonstrates that main-group pallasites have a Î17O composition that is fully resolvable from that of the HEDs and mesosiderites, indicating the involvement of at least two parent bodies. The range of Î17O values exhibited by an achondrite group provides a useful means of assessing the extent to which their parent body underwent melting and isotopic homogenization. Oxygen isotope analysis can also highlight relationships between ungrouped achondrites and the more well-populated groups. A clear example of this is the proposed link between the evolved GRA 06128/9 meteorites and the brachinites.The evidence from oxygen isotopes, in conjunction with that from other techniques, indicates that we have samples from approximately 110 asteroidal parent bodies (â¼60 irons, â¼35 achondrites and stony-iron, and ââ¼15 chondrites) in our global meteorite collection. However, compared to the likely size of the original protoplanetary asteroid population, this is an extremely low value. In addition, almost all of the differentiated samples (achondrites, stony-iron and irons) are derived from parent bodies that were highly disrupted early in their evolution.High-precision oxygen isotope analysis of achondrites provides some important insights into the origin of mass-independent variation in the early Solar System. In particular, the evidence from various primitive achondrite groups indicates that both the slope 1 (Y&R) and CCAM lines are of primordial significance. Î17O differences between water ice and silicate-rich solids were probably the initial source of the slope 1 anomaly. These phases most likely acquired their isotopic composition as a result of UV photo-dissociation of CO that took place either in the early solar nebula or precursor giant molecular cloud. Such small-scale isotopic heterogeneities were propagated into larger-sized bodies, such as asteroids and planets, as a result of early Solar System processes, including dehydration, aqueous alteration, melting and collisional interactions.There is increasing evidence that chondritic parent bodies accreted relatively late compared to achondritic asteroids. This may account for the fact that apart from a few notable exceptions' such as the aubrite-enstatite chondrite association, known chondrite groups could not have been the parents to the main achondrite groups.