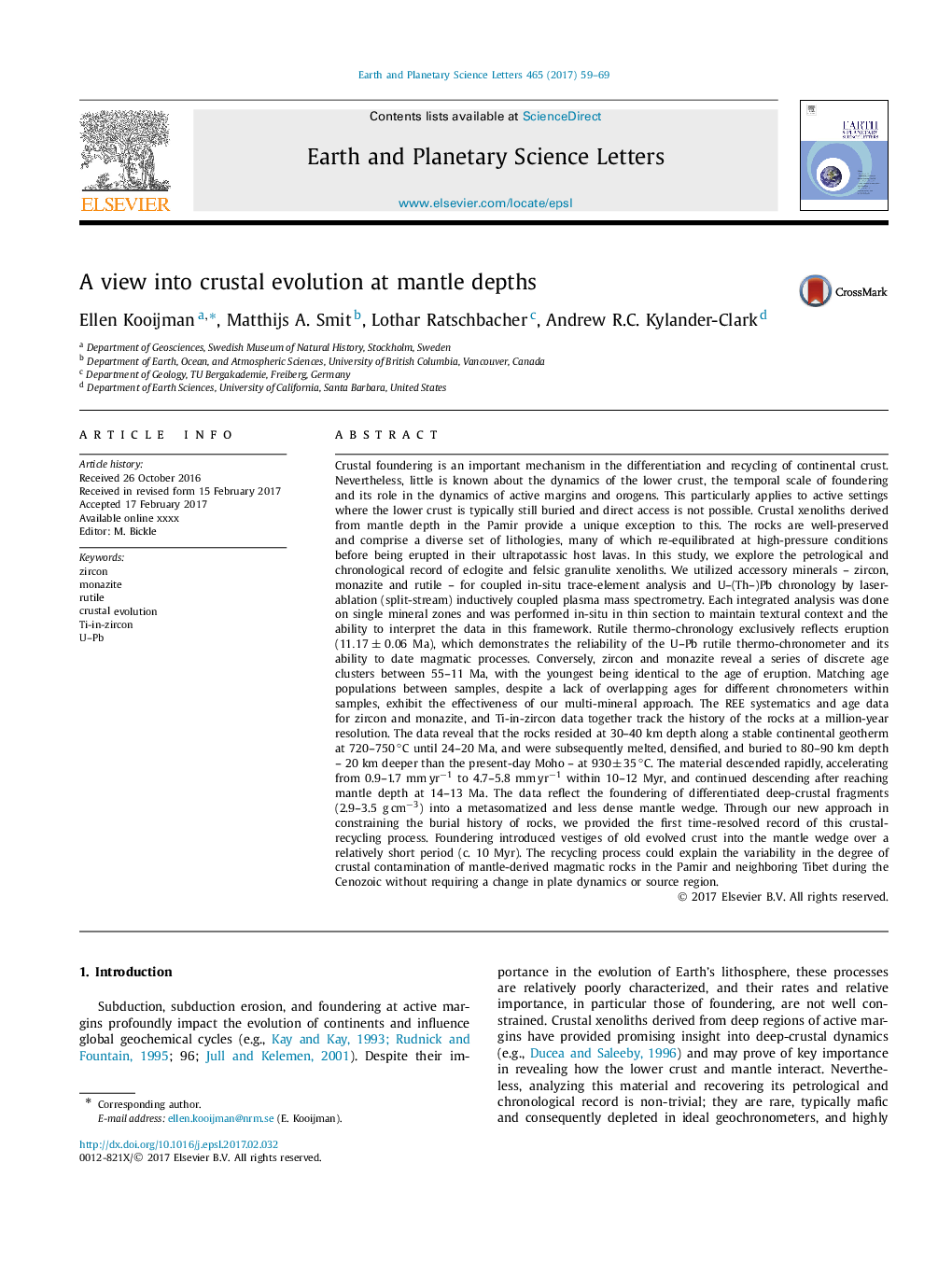 چکیده انگلیسی
Crustal foundering is an important mechanism in the differentiation and recycling of continental crust. Nevertheless, little is known about the dynamics of the lower crust, the temporal scale of foundering and its role in the dynamics of active margins and orogens. This particularly applies to active settings where the lower crust is typically still buried and direct access is not possible. Crustal xenoliths derived from mantle depth in the Pamir provide a unique exception to this. The rocks are well-preserved and comprise a diverse set of lithologies, many of which re-equilibrated at high-pressure conditions before being erupted in their ultrapotassic host lavas. In this study, we explore the petrological and chronological record of eclogite and felsic granulite xenoliths. We utilized accessory minerals - zircon, monazite and rutile - for coupled in-situ trace-element analysis and U-(Th-)Pb chronology by laser-ablation (split-stream) inductively coupled plasma mass spectrometry. Each integrated analysis was done on single mineral zones and was performed in-situ in thin section to maintain textural context and the ability to interpret the data in this framework. Rutile thermo-chronology exclusively reflects eruption (11.17Â±0.06Ma), which demonstrates the reliability of the U-Pb rutile thermo-chronometer and its ability to date magmatic processes. Conversely, zircon and monazite reveal a series of discrete age clusters between 55-11 Ma, with the youngest being identical to the age of eruption. Matching age populations between samples, despite a lack of overlapping ages for different chronometers within samples, exhibit the effectiveness of our multi-mineral approach. The REE systematics and age data for zircon and monazite, and Ti-in-zircon data together track the history of the rocks at a million-year resolution. The data reveal that the rocks resided at 30-40 km depth along a stable continental geotherm at 720-750âÂ°C until 24-20 Ma, and were subsequently melted, densified, and buried to 80-90 km depth - 20 km deeper than the present-day Moho - at 930Â±35Â°C. The material descended rapidly, accelerating from 0.9-1.7 mmâyrâ1 to 4.7-5.8 mmâyrâ1 within 10-12 Myr, and continued descending after reaching mantle depth at 14-13 Ma. The data reflect the foundering of differentiated deep-crustal fragments (2.9-3.5 gâcmâ3) into a metasomatized and less dense mantle wedge. Through our new approach in constraining the burial history of rocks, we provided the first time-resolved record of this crustal-recycling process. Foundering introduced vestiges of old evolved crust into the mantle wedge over a relatively short period (c. 10 Myr). The recycling process could explain the variability in the degree of crustal contamination of mantle-derived magmatic rocks in the Pamir and neighboring Tibet during the Cenozoic without requiring a change in plate dynamics or source region.
ناشر
Database: Elsevier - ScienceDirect (ساینس دایرکت)
Journal: Earth and Planetary Science Letters - Volume 465, 1 May 2017, Pages 59-69
نویسندگان
Ellen Kooijman, Matthijs A. Smit, Lothar Ratschbacher, Andrew R.C. Kylander-Clark,
دانلود مقاله + سفارش ترجمه
دانلود مقاله ISI انگلیسی
رایگان برای ایرانیان
سفارش ترجمه تخصصی
با تضمین قیمت و کیفیت
منتشر شده در