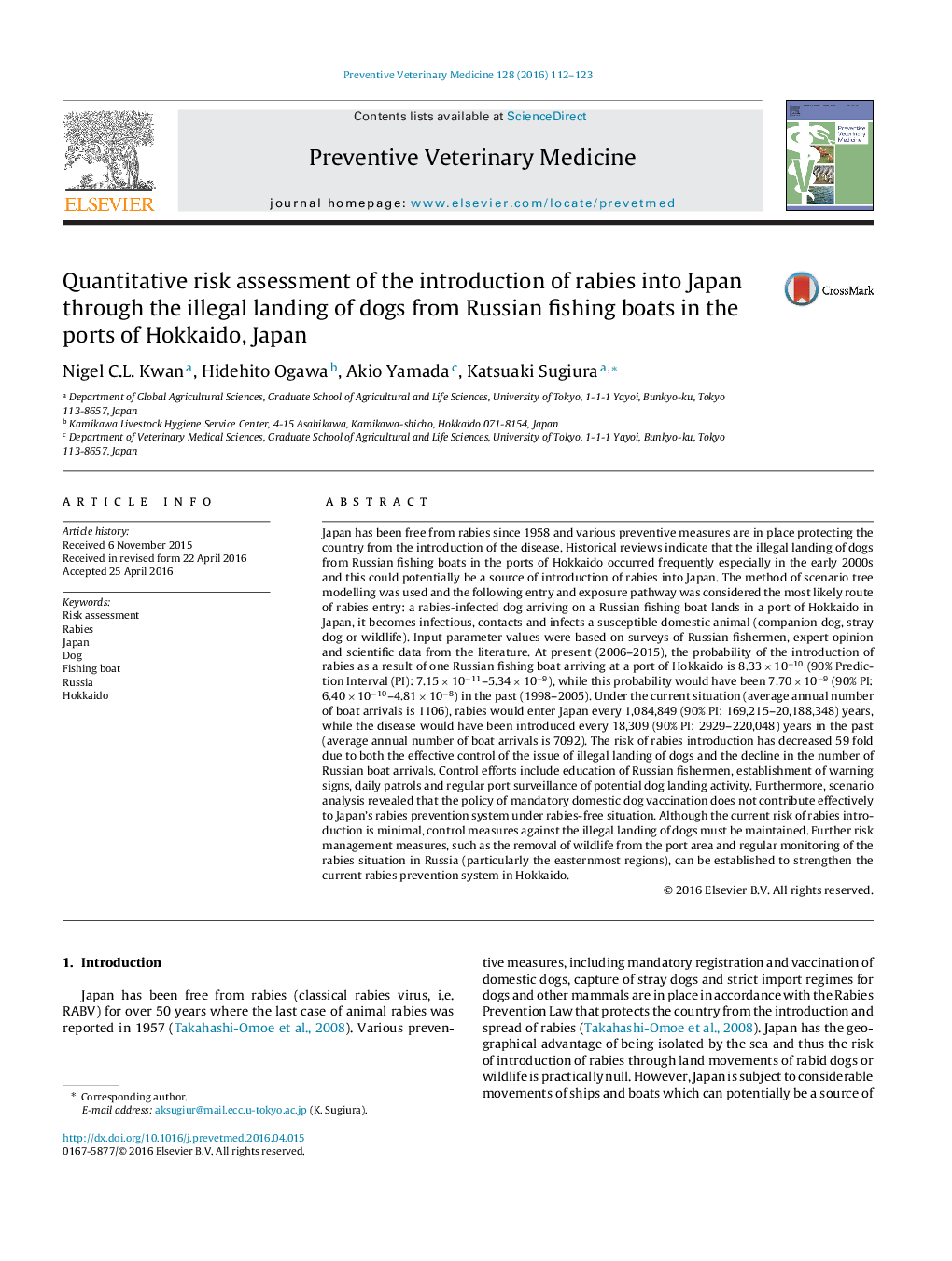 - The risk of rabies introduction through illegal landing of dogs from Russian fishing boats in Hokkaido ports was assessed.
- The result indicated that rabies would enter Japan every 1,084,849 (90% Prediction Interval: 169,215-20,188,348) years assuming the present condition continues.
- Scenario analysis indicated that the policy of mandatory domestic dog vaccination does not contribute to Japan's rabies prevention system.
- It also indicated that management efforts should continue to focus on both port surveillance and on the monitoring of the rabies situation in Russia.

Japan has been free from rabies since 1958 and various preventive measures are in place protecting the country from the introduction of the disease. Historical reviews indicate that the illegal landing of dogs from Russian fishing boats in the ports of Hokkaido occurred frequently especially in the early 2000s and this could potentially be a source of introduction of rabies into Japan. The method of scenario tree modelling was used and the following entry and exposure pathway was considered the most likely route of rabies entry: a rabies-infected dog arriving on a Russian fishing boat lands in a port of Hokkaido in Japan, it becomes infectious, contacts and infects a susceptible domestic animal (companion dog, stray dog or wildlife). Input parameter values were based on surveys of Russian fishermen, expert opinion and scientific data from the literature. At present (2006-2015), the probability of the introduction of rabies as a result of one Russian fishing boat arriving at a port of Hokkaido is 8.33Â ÃÂ 10â10 (90% Prediction Interval (PI): 7.15Â ÃÂ 10â11-5.34Â ÃÂ 10â9), while this probability would have been 7.70Â ÃÂ 10â9 (90% PI: 6.40Â ÃÂ 10â10-4.81Â ÃÂ 10â8) in the past (1998-2005). Under the current situation (average annual number of boat arrivals is 1106), rabies would enter Japan every 1,084,849 (90% PI: 169,215-20,188,348) years, while the disease would have been introduced every 18,309 (90% PI: 2929-220,048) years in the past (average annual number of boat arrivals is 7092). The risk of rabies introduction has decreased 59 fold due to both the effective control of the issue of illegal landing of dogs and the decline in the number of Russian boat arrivals. Control efforts include education of Russian fishermen, establishment of warning signs, daily patrols and regular port surveillance of potential dog landing activity. Furthermore, scenario analysis revealed that the policy of mandatory domestic dog vaccination does not contribute effectively to Japan's rabies prevention system under rabies-free situation. Although the current risk of rabies introduction is minimal, control measures against the illegal landing of dogs must be maintained. Further risk management measures, such as the removal of wildlife from the port area and regular monitoring of the rabies situation in Russia (particularly the easternmost regions), can be established to strengthen the current rabies prevention system in Hokkaido.