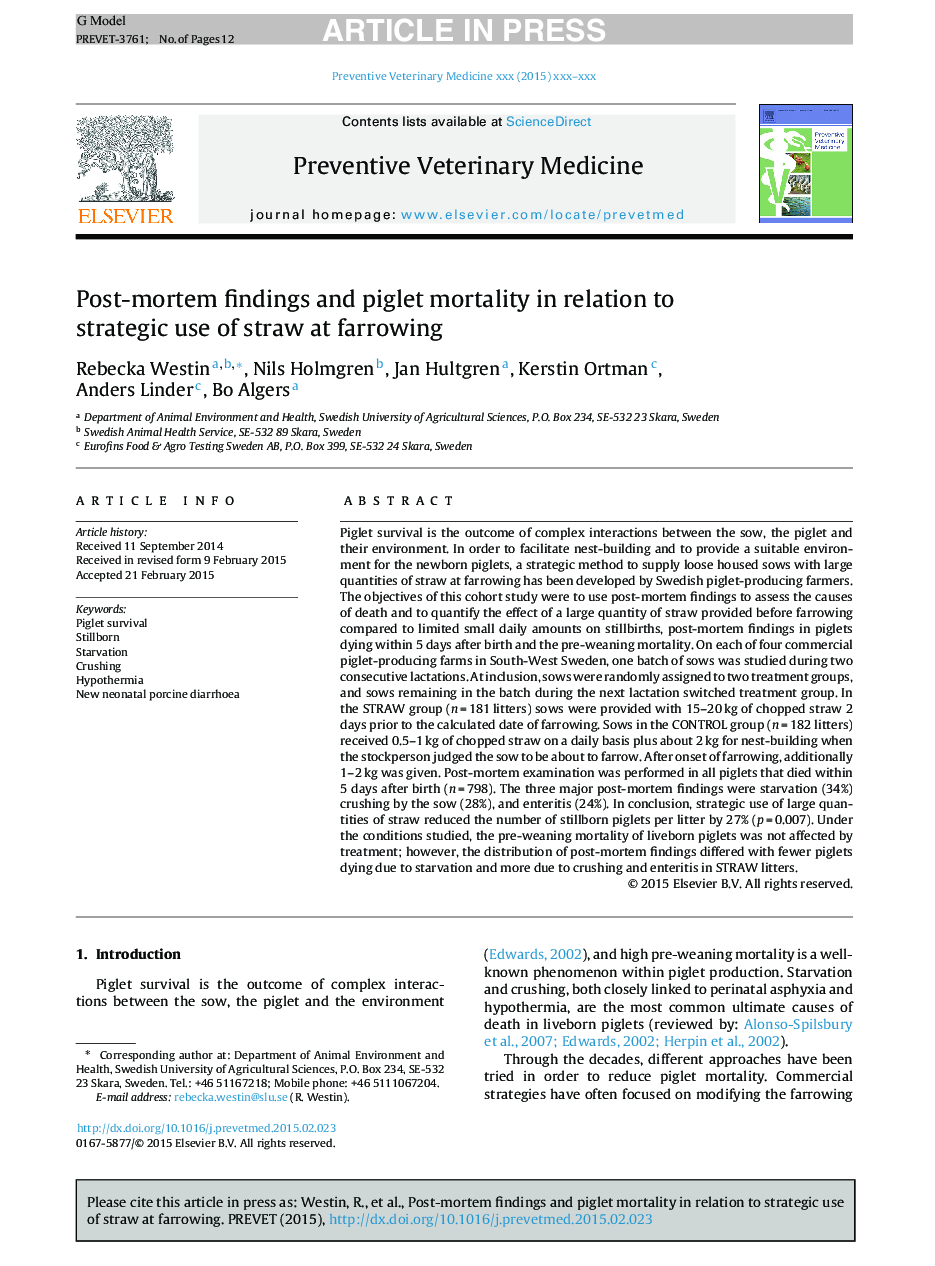 چکیده انگلیسی
Piglet survival is the outcome of complex interactions between the sow, the piglet and their environment. In order to facilitate nest-building and to provide a suitable environment for the newborn piglets, a strategic method to supply loose housed sows with large quantities of straw at farrowing has been developed by Swedish piglet-producing farmers. The objectives of this cohort study were to use post-mortem findings to assess the causes of death and to quantify the effect of a large quantity of straw provided before farrowing compared to limited small daily amounts on stillbirths, post-mortem findings in piglets dying within 5 days after birth and the pre-weaning mortality. On each of four commercial piglet-producing farms in South-West Sweden, one batch of sows was studied during two consecutive lactations. At inclusion, sows were randomly assigned to two treatment groups, and sows remaining in the batch during the next lactation switched treatment group. In the STRAW group (nÂ =Â 181Â litters) sows were provided with 15-20Â kg of chopped straw 2 days prior to the calculated date of farrowing. Sows in the CONTROL group (nÂ =Â 182 litters) received 0.5-1Â kg of chopped straw on a daily basis plus about 2Â kg for nest-building when the stockperson judged the sow to be about to farrow. After onset of farrowing, additionally 1-2Â kg was given. Post-mortem examination was performed in all piglets that died within 5 days after birth (nÂ =Â 798). The three major post-mortem findings were starvation (34%) crushing by the sow (28%), and enteritis (24%). In conclusion, strategic use of large quantities of straw reduced the number of stillborn piglets per litter by 27% (pÂ =Â 0.007). Under the conditions studied, the pre-weaning mortality of liveborn piglets was not affected by treatment; however, the distribution of post-mortem findings differed with fewer piglets dying due to starvation and more due to crushing and enteritis in STRAW litters.
ناشر
Database: Elsevier - ScienceDirect (ساینس دایرکت)
Journal: Preventive Veterinary Medicine - Volume 119, Issues 3â4, 1 May 2015, Pages 141-152
نویسندگان
Rebecka Westin, Nils Holmgren, Jan Hultgren, Kerstin Ortman, Anders Linder, Bo Algers,
دانلود مقاله + سفارش ترجمه
دانلود مقاله ISI انگلیسی
رایگان برای ایرانیان
سفارش ترجمه تخصصی
با تضمین قیمت و کیفیت
منتشر شده در