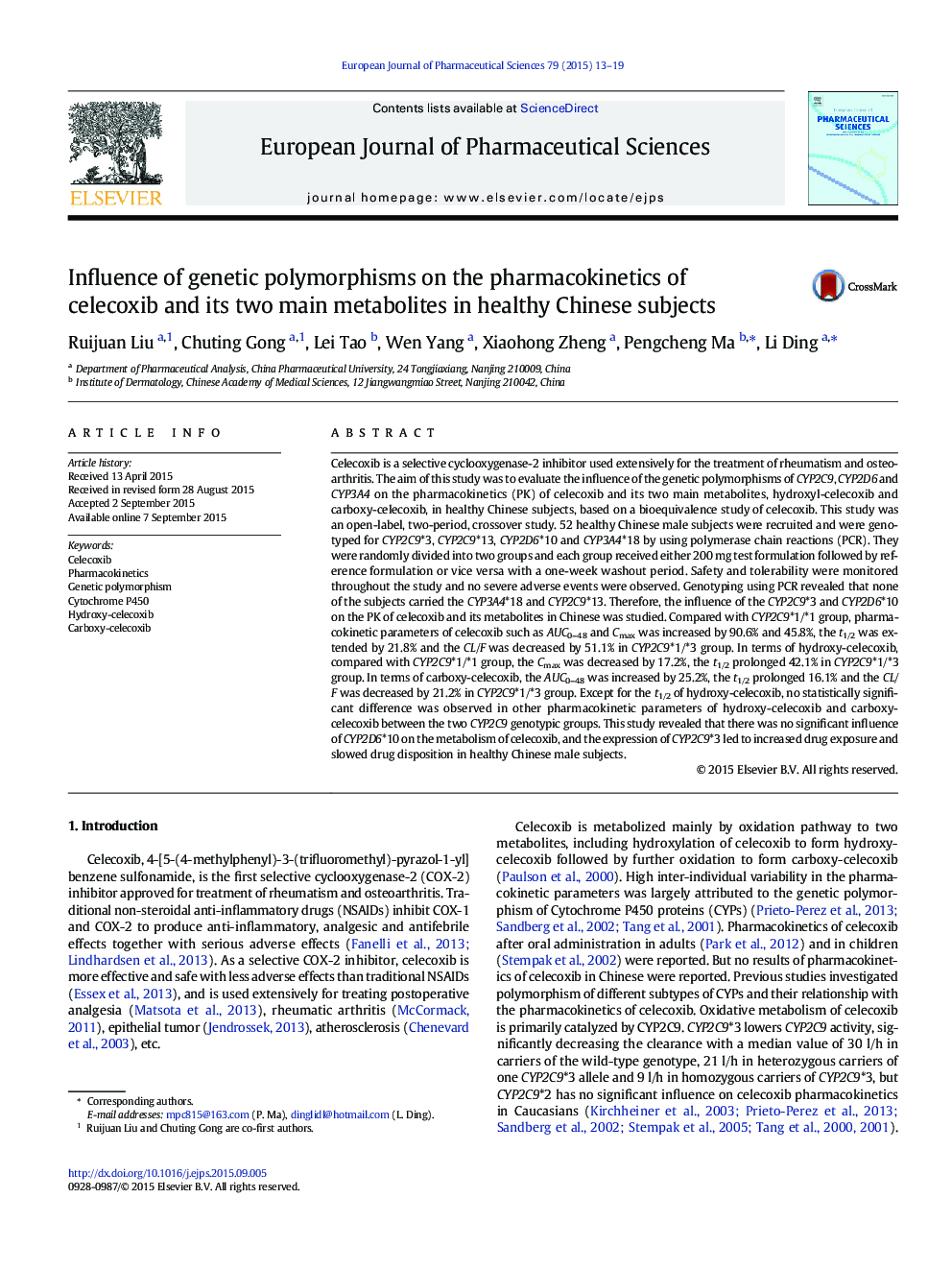 Celecoxib is a selective cyclooxygenase-2 inhibitor used extensively for the treatment of rheumatism and osteoarthritis. The aim of this study was to evaluate the influence of the genetic polymorphisms of CYP2C9, CYP2D6 and CYP3A4 on the pharmacokinetics (PK) of celecoxib and its two main metabolites, hydroxyl-celecoxib and carboxy-celecoxib, in healthy Chinese subjects, based on a bioequivalence study of celecoxib. This study was an open-label, two-period, crossover study. 52 healthy Chinese male subjects were recruited and were genotyped for CYP2C9*3, CYP2C9*13, CYP2D6*10 and CYP3A4*18 by using polymerase chain reactions (PCR). They were randomly divided into two groups and each group received either 200Â mg test formulation followed by reference formulation or vice versa with a one-week washout period. Safety and tolerability were monitored throughout the study and no severe adverse events were observed. Genotyping using PCR revealed that none of the subjects carried the CYP3A4*18 and CYP2C9*13. Therefore, the influence of the CYP2C9*3 and CYP2D6*10 on the PK of celecoxib and its metabolites in Chinese was studied. Compared with CYP2C9*1/*1 group, pharmacokinetic parameters of celecoxib such as AUC0-48 and Cmax was increased by 90.6% and 45.8%, the t1/2 was extended by 21.8% and the CL/F was decreased by 51.1% in CYP2C9*1/*3 group. In terms of hydroxy-celecoxib, compared with CYP2C9*1/*1 group, the Cmax was decreased by 17.2%, the t1/2 prolonged 42.1% in CYP2C9*1/*3 group. In terms of carboxy-celecoxib, the AUC0-48 was increased by 25.2%, the t1/2 prolonged 16.1% and the CL/F was decreased by 21.2% in CYP2C9*1/*3 group. Except for the t1/2 of hydroxy-celecoxib, no statistically significant difference was observed in other pharmacokinetic parameters of hydroxy-celecoxib and carboxy-celecoxib between the two CYP2C9 genotypic groups. This study revealed that there was no significant influence of CYP2D6*10 on the metabolism of celecoxib, and the expression of CYP2C9*3 led to increased drug exposure and slowed drug disposition in healthy Chinese male subjects.