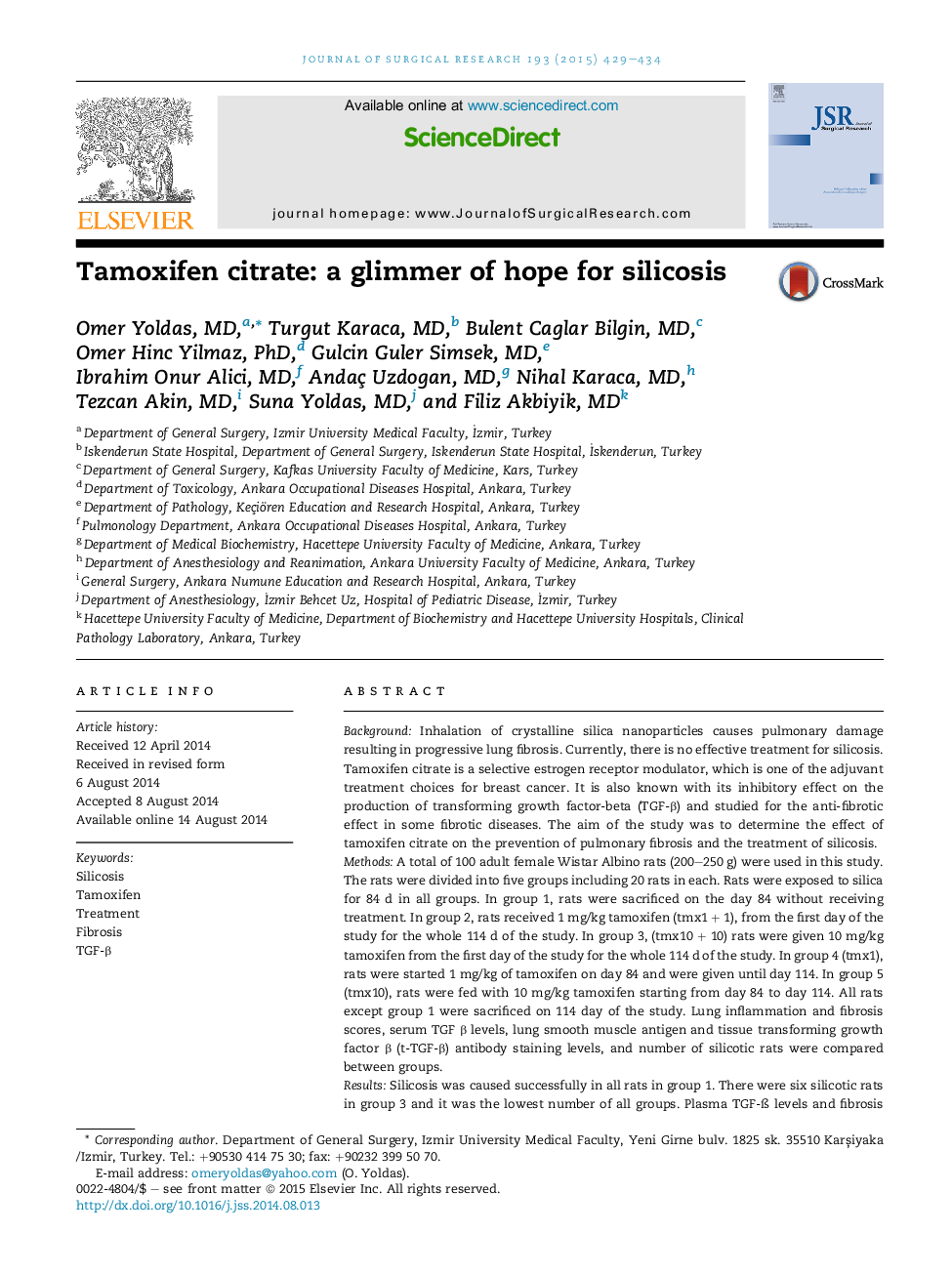 BackgroundInhalation of crystalline silica nanoparticles causes pulmonary damage resulting in progressive lung fibrosis. Currently, there is no effective treatment for silicosis. Tamoxifen citrate is a selective estrogen receptor modulator, which is one of the adjuvant treatment choices for breast cancer. It is also known with its inhibitory effect on the production of transforming growth factor-beta (TGF-Î²) and studied for the anti-fibrotic effect in some fibrotic diseases. The aim of the study was to determine the effect of tamoxifen citrate on the prevention of pulmonary fibrosis and the treatment of silicosis.MethodsA total of 100 adult female Wistar Albino rats (200-250Â g) were used in this study. The rats were divided into five groups including 20 rats in each. Rats were exposed to silica for 84Â d in all groups. In group 1, rats were sacrificed on the day 84 without receiving treatment. In group 2, rats received 1Â mg/kg tamoxifen (tmx1 + 1), from the first day of the study for the whole 114Â d of the study. In group 3, (tmx10Â +Â 10) rats were given 10Â mg/kg tamoxifen from the first day of the study for the whole 114Â d of the study. In group 4 (tmx1), rats were started 1Â mg/kg of tamoxifen on day 84 and were given until day 114. In group 5 (tmx10), rats were fed with 10Â mg/kg tamoxifen starting from day 84 to day 114. All rats except group 1 were sacrificed on 114 day of the study. Lung inflammation and fibrosis scores, serum TGF Î² levels, lung smooth muscle antigen and tissue transforming growth factor Î² (t-TGF-Î²) antibody staining levels, and number of silicotic rats were compared between groups.ResultsSilicosis was caused successfully in all rats in group 1. There were six silicotic rats in group 3 and it was the lowest number of all groups. Plasma TGF-Ã levels and fibrosis score were significantly lower in all groups when compared with the control group. Tamoxifen could have preventive or treating effects in silicosis and found that lung fibrosis score was significantly lower in rats treated with tamoxifen.ConclusionsTamoxifen treatment after and/or before induction of silicosis decreased lung fibrosis score with blood TGF-Î² levels. We hope that this study may introduce a new indication as prophylactic use of tamoxifen in high-risk groups for silicosis and for treatment of silicosis.