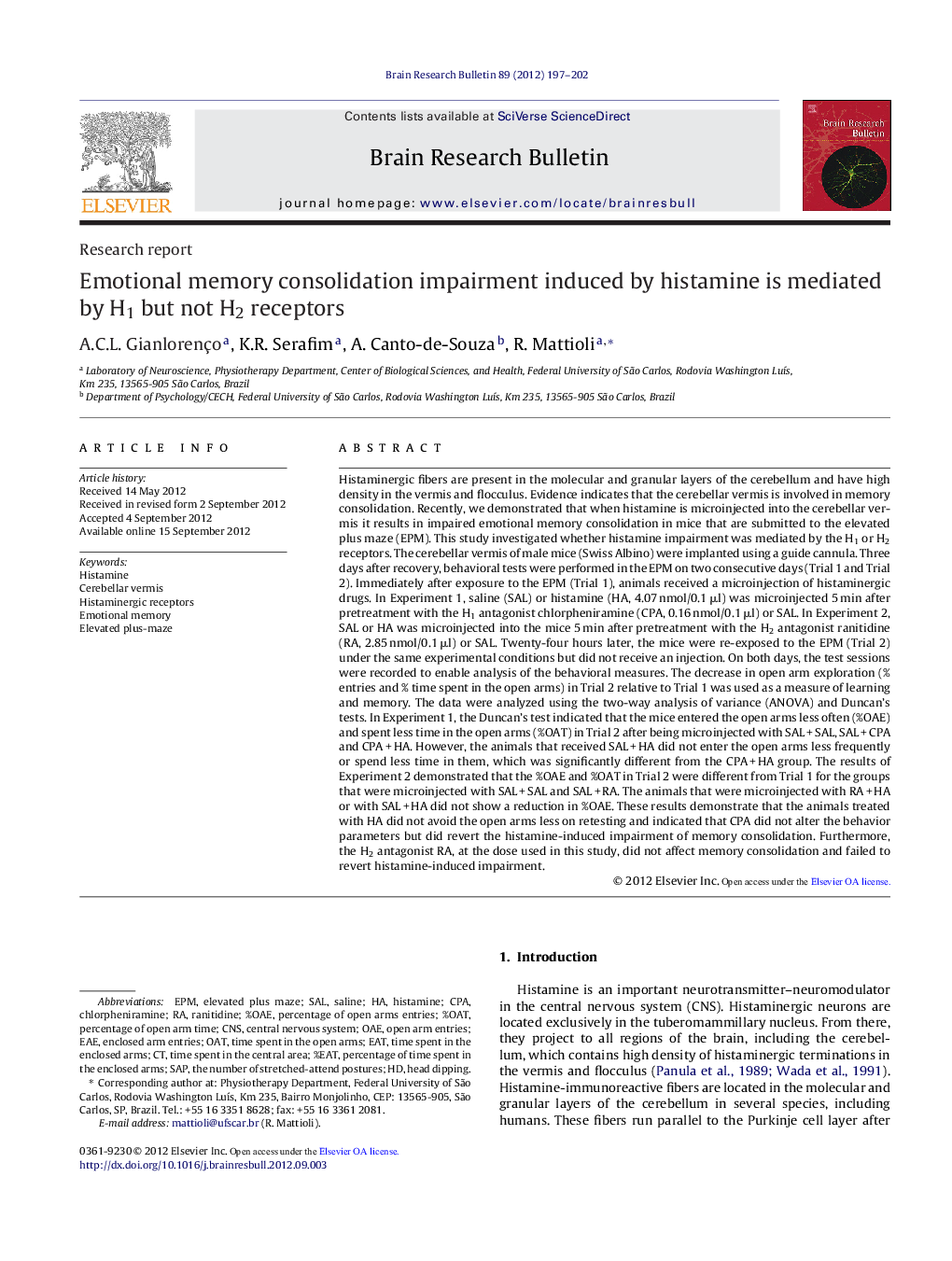 Histaminergic fibers are present in the molecular and granular layers of the cerebellum and have high density in the vermis and flocculus. Evidence indicates that the cerebellar vermis is involved in memory consolidation. Recently, we demonstrated that when histamine is microinjected into the cerebellar vermis it results in impaired emotional memory consolidation in mice that are submitted to the elevated plus maze (EPM). This study investigated whether histamine impairment was mediated by the H1 or H2 receptors. The cerebellar vermis of male mice (Swiss Albino) were implanted using a guide cannula. Three days after recovery, behavioral tests were performed in the EPM on two consecutive days (Trial 1 and Trial 2). Immediately after exposure to the EPM (Trial 1), animals received a microinjection of histaminergic drugs. In Experiment 1, saline (SAL) or histamine (HA, 4.07Â nmol/0.1Â Î¼l) was microinjected 5Â min after pretreatment with the H1 antagonist chlorpheniramine (CPA, 0.16Â nmol/0.1Â Î¼l) or SAL. In Experiment 2, SAL or HA was microinjected into the mice 5Â min after pretreatment with the H2 antagonist ranitidine (RA, 2.85Â nmol/0.1Â Î¼l) or SAL. Twenty-four hours later, the mice were re-exposed to the EPM (Trial 2) under the same experimental conditions but did not receive an injection. On both days, the test sessions were recorded to enable analysis of the behavioral measures. The decrease in open arm exploration (% entries and % time spent in the open arms) in Trial 2 relative to Trial 1 was used as a measure of learning and memory. The data were analyzed using the two-way analysis of variance (ANOVA) and Duncan's tests. In Experiment 1, the Duncan's test indicated that the mice entered the open arms less often (%OAE) and spent less time in the open arms (%OAT) in Trial 2 after being microinjected with SALÂ +Â SAL, SALÂ +Â CPA and CPAÂ +Â HA. However, the animals that received SALÂ +Â HA did not enter the open arms less frequently or spend less time in them, which was significantly different from the CPAÂ +Â HA group. The results of Experiment 2 demonstrated that the %OAE and %OAT in Trial 2 were different from Trial 1 for the groups that were microinjected with SALÂ +Â SAL and SALÂ +Â RA. The animals that were microinjected with RAÂ +Â HA or with SALÂ +Â HA did not show a reduction in %OAE. These results demonstrate that the animals treated with HA did not avoid the open arms less on retesting and indicated that CPA did not alter the behavior parameters but did revert the histamine-induced impairment of memory consolidation. Furthermore, the H2 antagonist RA, at the dose used in this study, did not affect memory consolidation and failed to revert histamine-induced impairment.

âº Histaminergic fibers are present in the molecular and granular layers of the cerebellum. âº Evidence indicates that the cerebellar vermis is involved in memory consolidation. âº When histamine is microinjected into the cerebellar vermis it impairs emotional memory consolidation. âº Pretreatment with an H1 antagonist reversed the impairment. âº Emotional memory impairment caused by histamine injection is mediated by the H1 receptor.