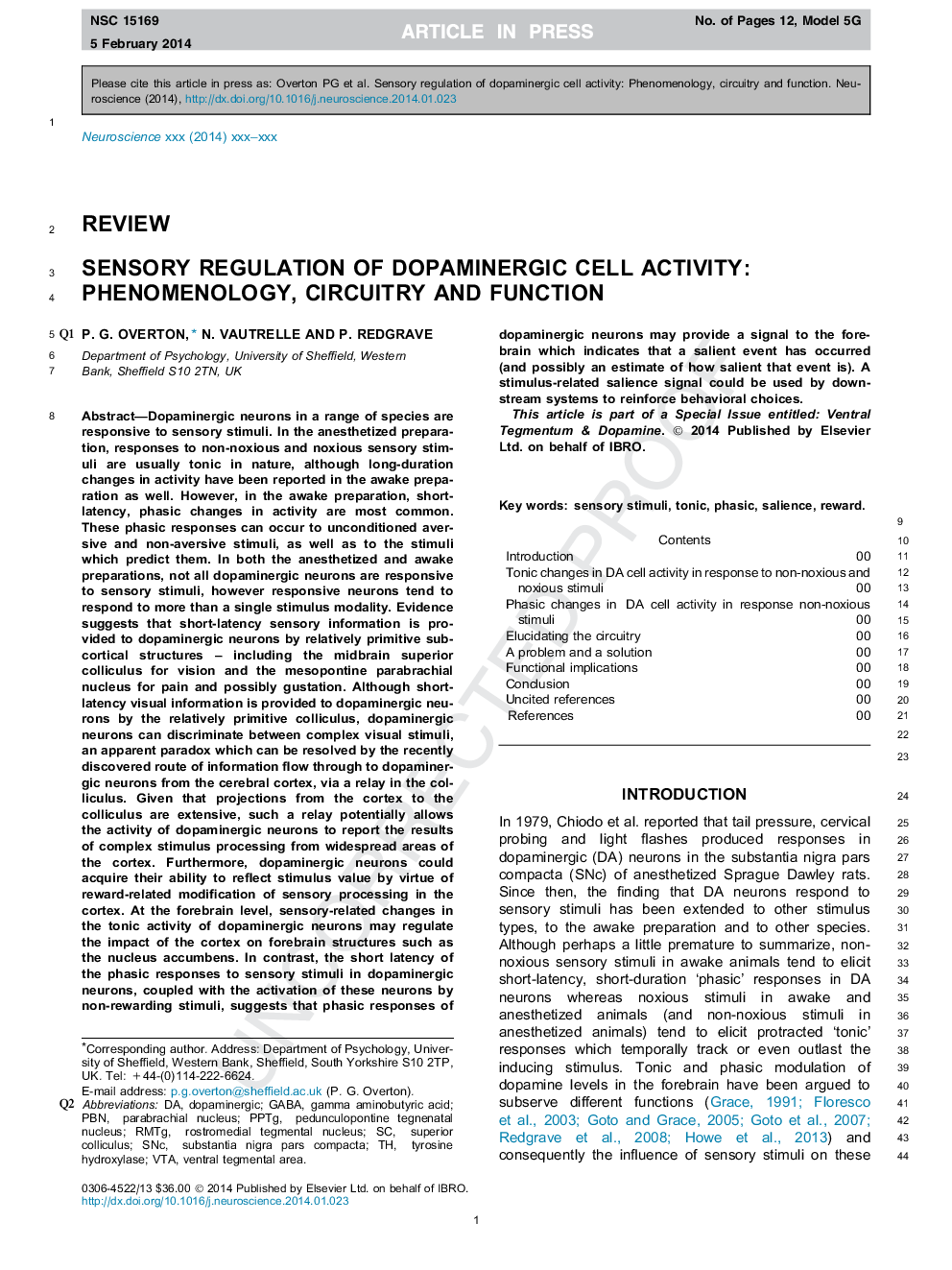 چکیده انگلیسی
Dopaminergic neurons in a range of species are responsive to sensory stimuli. In the anesthetized preparation, responses to non-noxious and noxious sensory stimuli are usually tonic in nature, although long-duration changes in activity have been reported in the awake preparation as well. However, in the awake preparation, short-latency, phasic changes in activity are most common. These phasic responses can occur to unconditioned aversive and non-aversive stimuli, as well as to the stimuli which predict them. In both the anesthetized and awake preparations, not all dopaminergic neurons are responsive to sensory stimuli, however responsive neurons tend to respond to more than a single stimulus modality. Evidence suggests that short-latency sensory information is provided to dopaminergic neurons by relatively primitive subcortical structures - including the midbrain superior colliculus for vision and the mesopontine parabrachial nucleus for pain and possibly gustation. Although short-latency visual information is provided to dopaminergic neurons by the relatively primitive colliculus, dopaminergic neurons can discriminate between complex visual stimuli, an apparent paradox which can be resolved by the recently discovered route of information flow through to dopaminergic neurons from the cerebral cortex, via a relay in the colliculus. Given that projections from the cortex to the colliculus are extensive, such a relay potentially allows the activity of dopaminergic neurons to report the results of complex stimulus processing from widespread areas of the cortex. Furthermore, dopaminergic neurons could acquire their ability to reflect stimulus value by virtue of reward-related modification of sensory processing in the cortex. At the forebrain level, sensory-related changes in the tonic activity of dopaminergic neurons may regulate the impact of the cortex on forebrain structures such as the nucleus accumbens. In contrast, the short latency of the phasic responses to sensory stimuli in dopaminergic neurons, coupled with the activation of these neurons by non-rewarding stimuli, suggests that phasic responses of dopaminergic neurons may provide a signal to the forebrain which indicates that a salient event has occurred (and possibly an estimate of how salient that event is). A stimulus-related salience signal could be used by downstream systems to reinforce behavioral choices.
ناشر
Database: Elsevier - ScienceDirect (ساینس دایرکت)
Journal: Neuroscience - Volume 282, 12 December 2014, Pages 1-12
نویسندگان
P.G. Overton, N. Vautrelle, P. Redgrave,
دانلود مقاله + سفارش ترجمه
دانلود مقاله ISI انگلیسی
رایگان برای ایرانیان
سفارش ترجمه تخصصی
با تضمین قیمت و کیفیت
منتشر شده در