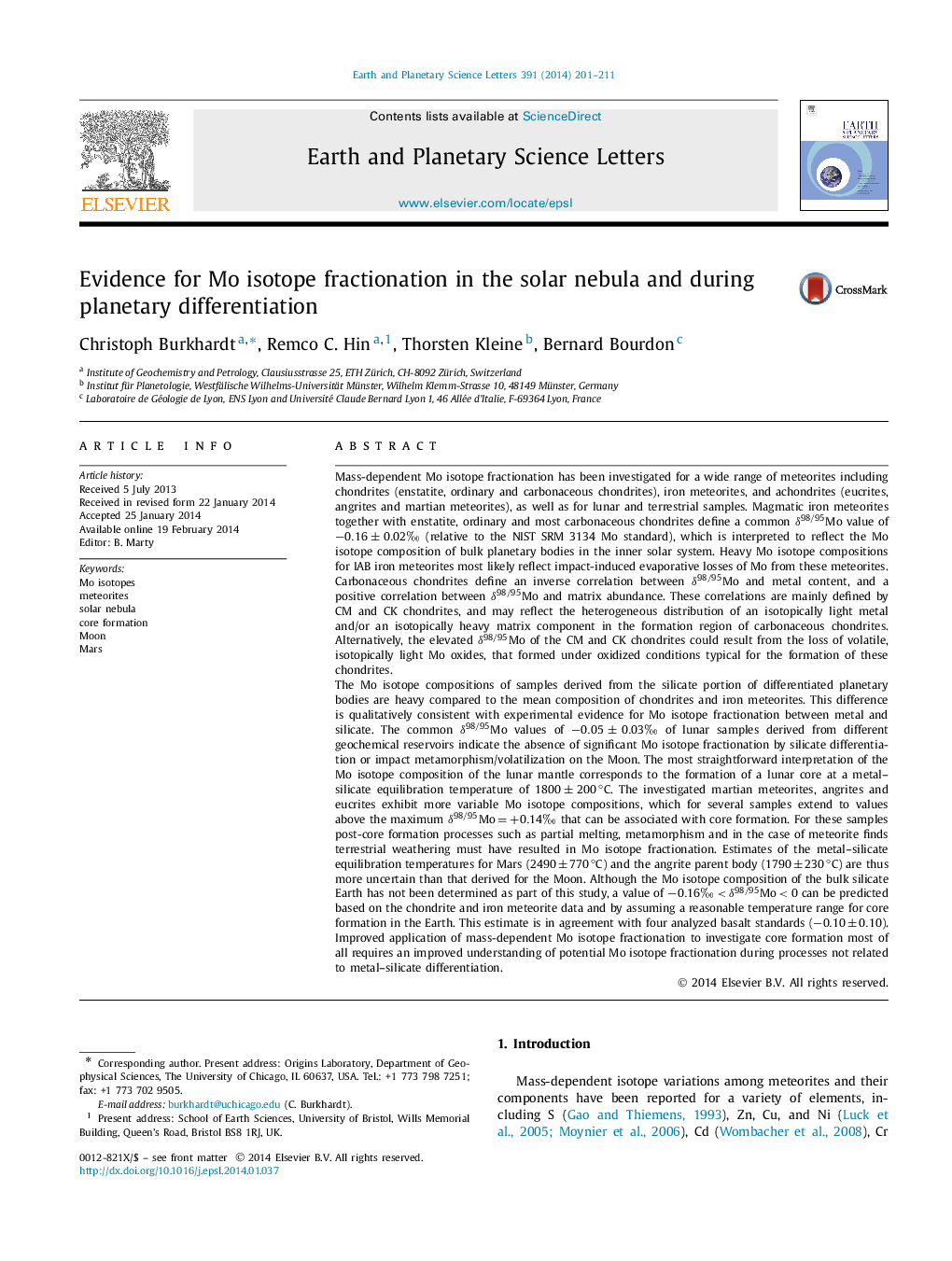 Mass-dependent Mo isotope fractionation has been investigated for a wide range of meteorites including chondrites (enstatite, ordinary and carbonaceous chondrites), iron meteorites, and achondrites (eucrites, angrites and martian meteorites), as well as for lunar and terrestrial samples. Magmatic iron meteorites together with enstatite, ordinary and most carbonaceous chondrites define a common Î´98/95Mo value of â0.16Â±0.02â° (relative to the NIST SRM 3134 Mo standard), which is interpreted to reflect the Mo isotope composition of bulk planetary bodies in the inner solar system. Heavy Mo isotope compositions for IAB iron meteorites most likely reflect impact-induced evaporative losses of Mo from these meteorites. Carbonaceous chondrites define an inverse correlation between Î´98/95Mo and metal content, and a positive correlation between Î´98/95Mo and matrix abundance. These correlations are mainly defined by CM and CK chondrites, and may reflect the heterogeneous distribution of an isotopically light metal and/or an isotopically heavy matrix component in the formation region of carbonaceous chondrites. Alternatively, the elevated Î´98/95Mo of the CM and CK chondrites could result from the loss of volatile, isotopically light Mo oxides, that formed under oxidized conditions typical for the formation of these chondrites.The Mo isotope compositions of samples derived from the silicate portion of differentiated planetary bodies are heavy compared to the mean composition of chondrites and iron meteorites. This difference is qualitatively consistent with experimental evidence for Mo isotope fractionation between metal and silicate. The common Î´98/95Mo values of â0.05Â±0.03â° of lunar samples derived from different geochemical reservoirs indicate the absence of significant Mo isotope fractionation by silicate differentiation or impact metamorphism/volatilization on the Moon. The most straightforward interpretation of the Mo isotope composition of the lunar mantle corresponds to the formation of a lunar core at a metal-silicate equilibration temperature of 1800Â±200Â°C. The investigated martian meteorites, angrites and eucrites exhibit more variable Mo isotope compositions, which for several samples extend to values above the maximum Î´98/95Mo=+0.14â° that can be associated with core formation. For these samples post-core formation processes such as partial melting, metamorphism and in the case of meteorite finds terrestrial weathering must have resulted in Mo isotope fractionation. Estimates of the metal-silicate equilibration temperatures for Mars (2490Â±770Â°C) and the angrite parent body (1790Â±230Â°C) are thus more uncertain than that derived for the Moon. Although the Mo isotope composition of the bulk silicate Earth has not been determined as part of this study, a value of â0.16â°<Î´98/95Mo<0 can be predicted based on the chondrite and iron meteorite data and by assuming a reasonable temperature range for core formation in the Earth. This estimate is in agreement with four analyzed basalt standards (â0.10Â±0.10). Improved application of mass-dependent Mo isotope fractionation to investigate core formation most of all requires an improved understanding of potential Mo isotope fractionation during processes not related to metal-silicate differentiation.