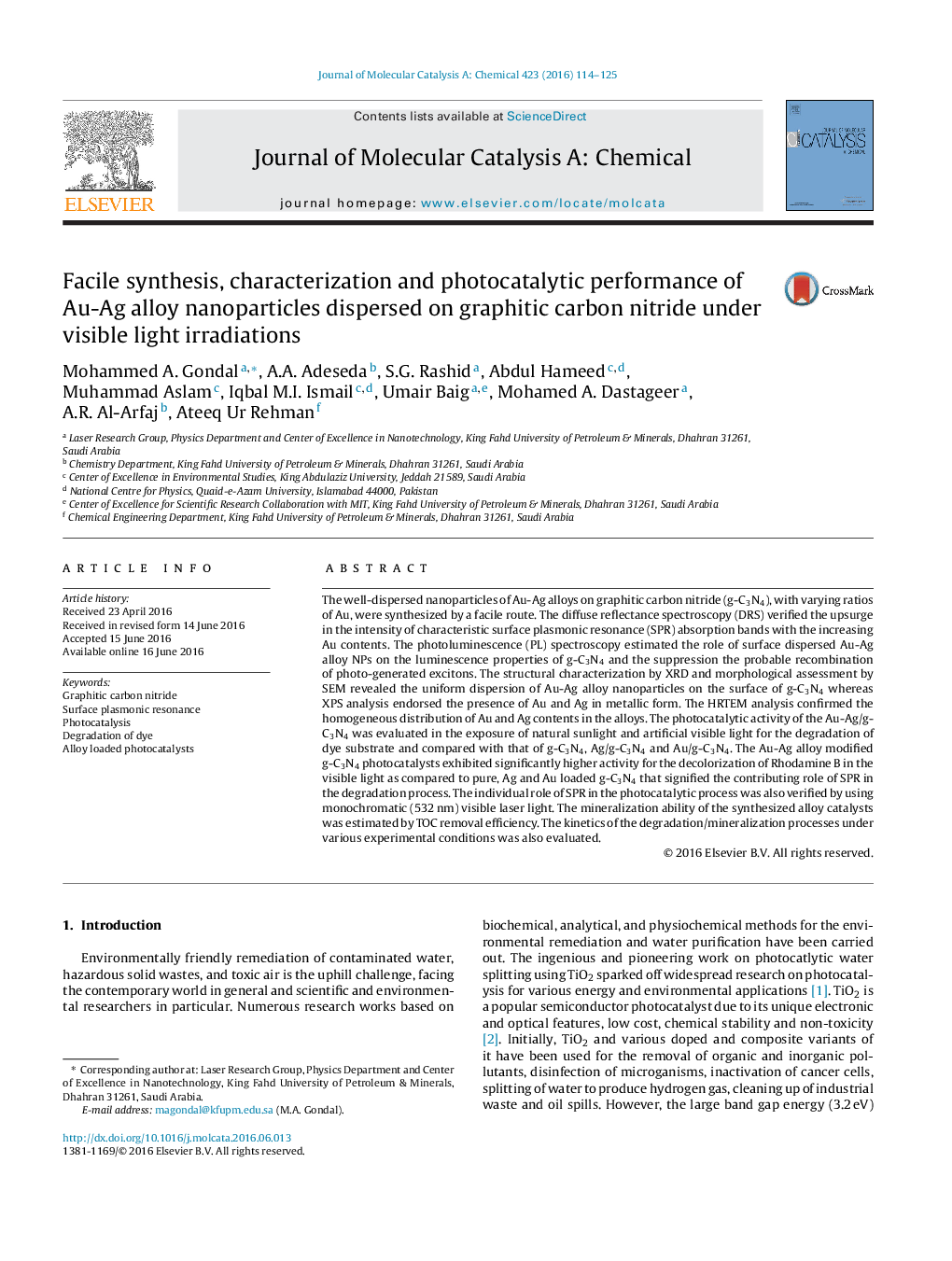 • Visible light active Au-Ag/g-C3N4 catalyst was synthesized by a facile technique.
• Photocatalytic performance was studied under sunlight and artificial visible light.
• The kinetics of the decolorization and mineralization of dye were investigated.
• Mechanism of enhanced activity under visible light irradiation was also proposed.

The well-dispersed nanoparticles of Au-Ag alloys on graphitic carbon nitride (g-C3N4), with varying ratios of Au, were synthesized by a facile route. The diffuse reflectance spectroscopy (DRS) verified the upsurge in the intensity of characteristic surface plasmonic resonance (SPR) absorption bands with the increasing Au contents. The photoluminescence (PL) spectroscopy estimated the role of surface dispersed Au-Ag alloy NPs on the luminescence properties of g-C3N4 and the suppression the probable recombination of photo-generated excitons. The structural characterization by XRD and morphological assessment by SEM revealed the uniform dispersion of Au-Ag alloy nanoparticles on the surface of g-C3N4 whereas XPS analysis endorsed the presence of Au and Ag in metallic form. The HRTEM analysis confirmed the homogeneous distribution of Au and Ag contents in the alloys. The photocatalytic activity of the Au-Ag/g-C3N4 was evaluated in the exposure of natural sunlight and artificial visible light for the degradation of dye substrate and compared with that of g-C3N4, Ag/g-C3N4 and Au/g-C3N4. The Au-Ag alloy modified g-C3N4 photocatalysts exhibited significantly higher activity for the decolorization of Rhodamine B in the visible light as compared to pure, Ag and Au loaded g-C3N4 that signified the contributing role of SPR in the degradation process. The individual role of SPR in the photocatalytic process was also verified by using monochromatic (532 nm) visible laser light. The mineralization ability of the synthesized alloy catalysts was estimated by TOC removal efficiency. The kinetics of the degradation/mineralization processes under various experimental conditions was also evaluated.