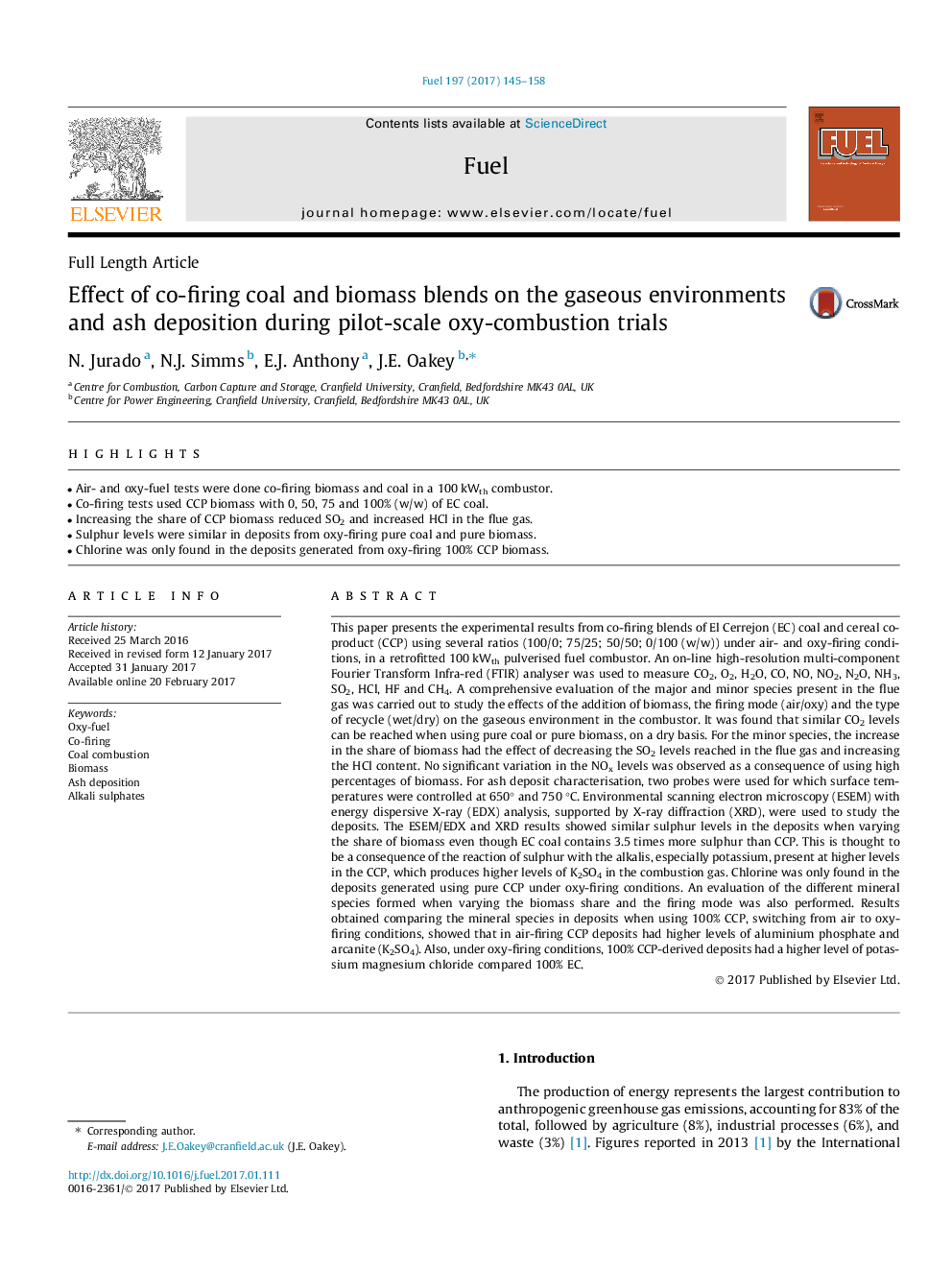 - Air- and oxy-fuel tests were done co-firing biomass and coal in a 100Â kWth combustor.
- Co-firing tests used CCP biomass with 0, 50, 75 and 100% (w/w) of EC coal.
- Increasing the share of CCP biomass reduced SO2 and increased HCl in the flue gas.
- Sulphur levels were similar in deposits from oxy-firing pure coal and pure biomass.
- Chlorine was only found in the deposits generated from oxy-firing 100% CCP biomass.

This paper presents the experimental results from co-firing blends of El Cerrejon (EC) coal and cereal co-product (CCP) using several ratios (100/0; 75/25; 50/50; 0/100 (w/w)) under air- and oxy-firing conditions, in a retrofitted 100Â kWth pulverised fuel combustor. An on-line high-resolution multi-component Fourier Transform Infra-red (FTIR) analyser was used to measure CO2, O2, H2O, CO, NO, NO2, N2O, NH3, SO2, HCl, HF and CH4. A comprehensive evaluation of the major and minor species present in the flue gas was carried out to study the effects of the addition of biomass, the firing mode (air/oxy) and the type of recycle (wet/dry) on the gaseous environment in the combustor. It was found that similar CO2 levels can be reached when using pure coal or pure biomass, on a dry basis. For the minor species, the increase in the share of biomass had the effect of decreasing the SO2 levels reached in the flue gas and increasing the HCl content. No significant variation in the NOx levels was observed as a consequence of using high percentages of biomass. For ash deposit characterisation, two probes were used for which surface temperatures were controlled at 650Â° and 750Â Â°C. Environmental scanning electron microscopy (ESEM) with energy dispersive X-ray (EDX) analysis, supported by X-ray diffraction (XRD), were used to study the deposits. The ESEM/EDX and XRD results showed similar sulphur levels in the deposits when varying the share of biomass even though EC coal contains 3.5Â times more sulphur than CCP. This is thought to be a consequence of the reaction of sulphur with the alkalis, especially potassium, present at higher levels in the CCP, which produces higher levels of K2SO4 in the combustion gas. Chlorine was only found in the deposits generated using pure CCP under oxy-firing conditions. An evaluation of the different mineral species formed when varying the biomass share and the firing mode was also performed. Results obtained comparing the mineral species in deposits when using 100% CCP, switching from air to oxy-firing conditions, showed that in air-firing CCP deposits had higher levels of aluminium phosphate and arcanite (K2SO4). Also, under oxy-firing conditions, 100% CCP-derived deposits had a higher level of potassium magnesium chloride compared 100% EC.