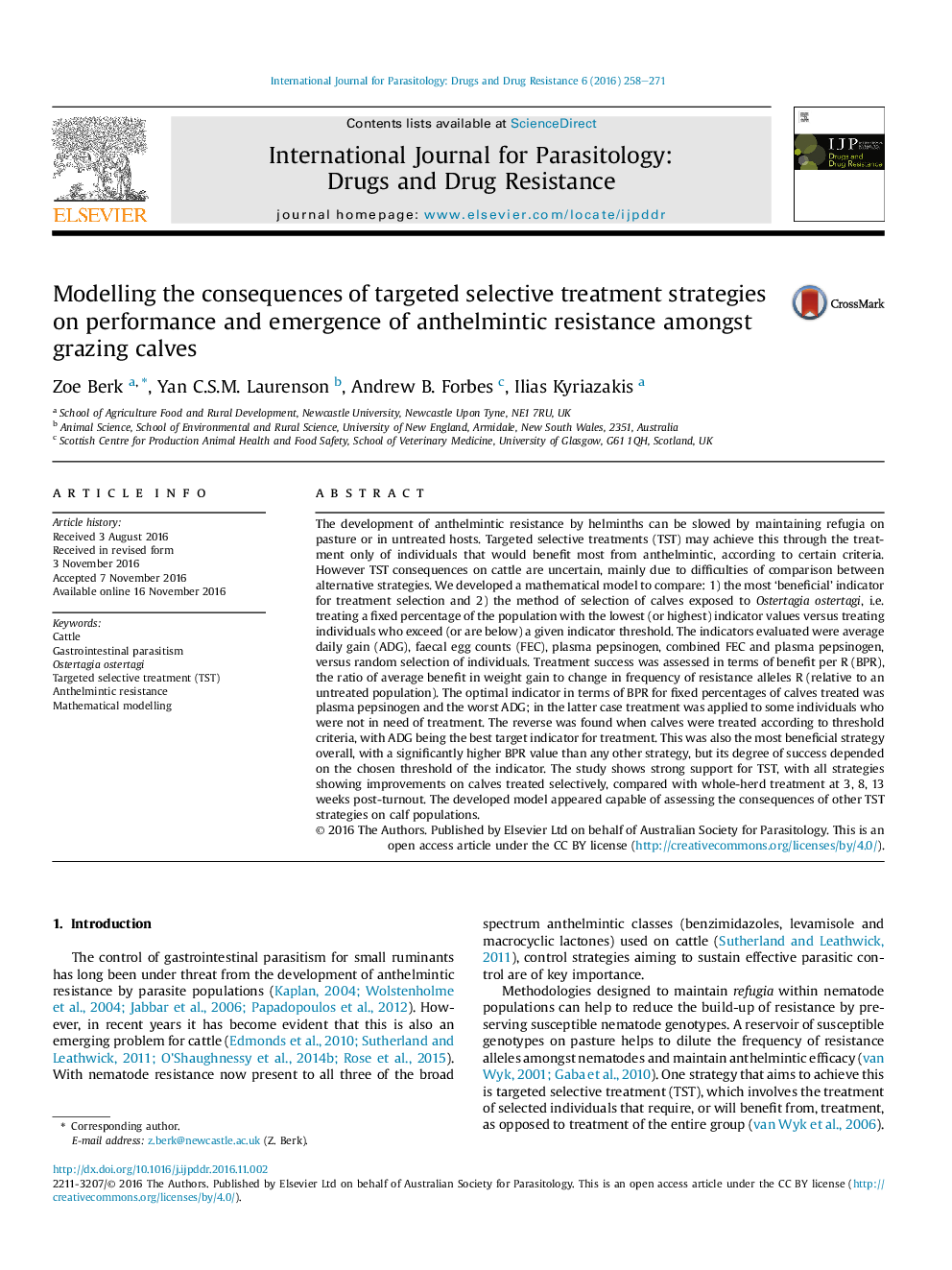 - Different phenotypic traits were evaluated for use in targeted selective treatments.
- Different methods of selection for treatment were evaluated.
- Benefit ratio was assessed as weight gain/frequency of resistant alleles in helminths.
- Benefit ratio declined as a larger percentage of the herd was treated.
- Treatment according to threshold triggers of average daily gain was most beneficial.

The development of anthelmintic resistance by helminths can be slowed by maintaining refugia on pasture or in untreated hosts. Targeted selective treatments (TST) may achieve this through the treatment only of individuals that would benefit most from anthelmintic, according to certain criteria. However TST consequences on cattle are uncertain, mainly due to difficulties of comparison between alternative strategies. We developed a mathematical model to compare: 1) the most 'beneficial' indicator for treatment selection and 2) the method of selection of calves exposed to Ostertagia ostertagi, i.e. treating a fixed percentage of the population with the lowest (or highest) indicator values versus treating individuals who exceed (or are below) a given indicator threshold. The indicators evaluated were average daily gain (ADG), faecal egg counts (FEC), plasma pepsinogen, combined FEC and plasma pepsinogen, versus random selection of individuals. Treatment success was assessed in terms of benefit per R (BPR), the ratio of average benefit in weight gain to change in frequency of resistance alleles R (relative to an untreated population). The optimal indicator in terms of BPR for fixed percentages of calves treated was plasma pepsinogen and the worst ADG; in the latter case treatment was applied to some individuals who were not in need of treatment. The reverse was found when calves were treated according to threshold criteria, with ADG being the best target indicator for treatment. This was also the most beneficial strategy overall, with a significantly higher BPR value than any other strategy, but its degree of success depended on the chosen threshold of the indicator. The study shows strong support for TST, with all strategies showing improvements on calves treated selectively, compared with whole-herd treatment at 3, 8, 13 weeks post-turnout. The developed model appeared capable of assessing the consequences of other TST strategies on calf populations.