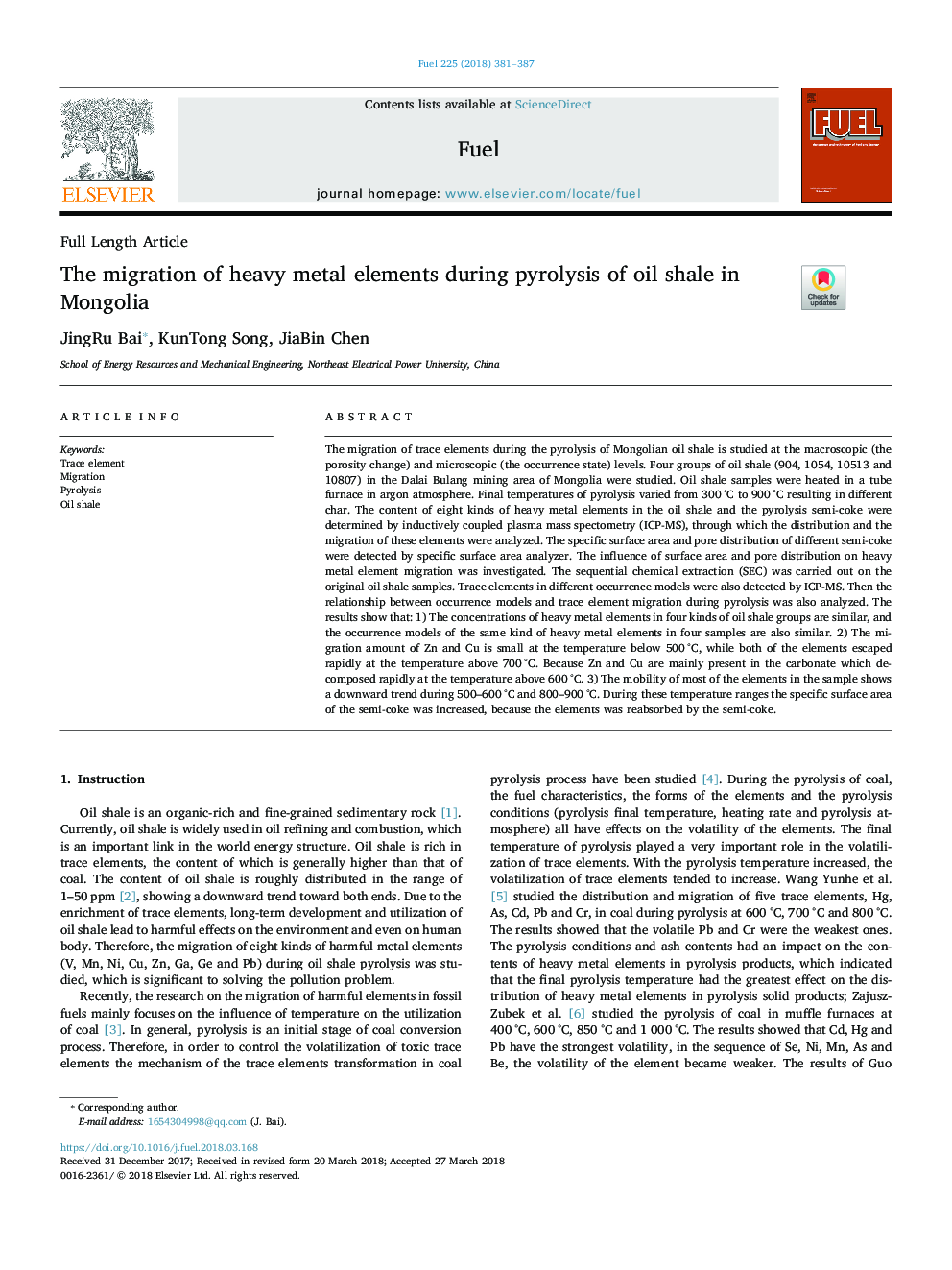 چکیده انگلیسی
The migration of trace elements during the pyrolysis of Mongolian oil shale is studied at the macroscopic (the porosity change) and microscopic (the occurrence state) levels. Four groups of oil shale (904, 1054, 10513 and 10807) in the Dalai Bulang mining area of Mongolia were studied. Oil shale samples were heated in a tube furnace in argon atmosphere. Final temperatures of pyrolysis varied from 300â¯Â°C to 900â¯Â°C resulting in different char. The content of eight kinds of heavy metal elements in the oil shale and the pyrolysis semi-coke were determined by inductively coupled plasma mass spectometry (ICP-MS), through which the distribution and the migration of these elements were analyzed. The specific surface area and pore distribution of different semi-coke were detected by specific surface area analyzer. The influence of surface area and pore distribution on heavy metal element migration was investigated. The sequential chemical extraction (SEC) was carried out on the original oil shale samples. Trace elements in different occurrence models were also detected by ICP-MS. Then the relationship between occurrence models and trace element migration during pyrolysis was also analyzed. The results show that: 1) The concentrations of heavy metal elements in four kinds of oil shale groups are similar, and the occurrence models of the same kind of heavy metal elements in four samples are also similar. 2) The migration amount of Zn and Cu is small at the temperature below 500â¯Â°C, while both of the elements escaped rapidly at the temperature above 700â¯Â°C. Because Zn and Cu are mainly present in the carbonate which decomposed rapidly at the temperature above 600â¯Â°C. 3) The mobility of most of the elements in the sample shows a downward trend during 500-600â¯Â°C and 800-900â¯Â°C. During these temperature ranges the specific surface area of the semi-coke was increased, because the elements was reabsorbed by the semi-coke.
ناشر
Database: Elsevier - ScienceDirect (ساینس دایرکت)
Journal: Fuel - Volume 225, 1 August 2018, Pages 381-387
نویسندگان
JingRu Bai, KunTong Song, JiaBin Chen,
دانلود مقاله + سفارش ترجمه
دانلود مقاله ISI انگلیسی
رایگان برای ایرانیان
سفارش ترجمه تخصصی
با تضمین قیمت و کیفیت
منتشر شده در