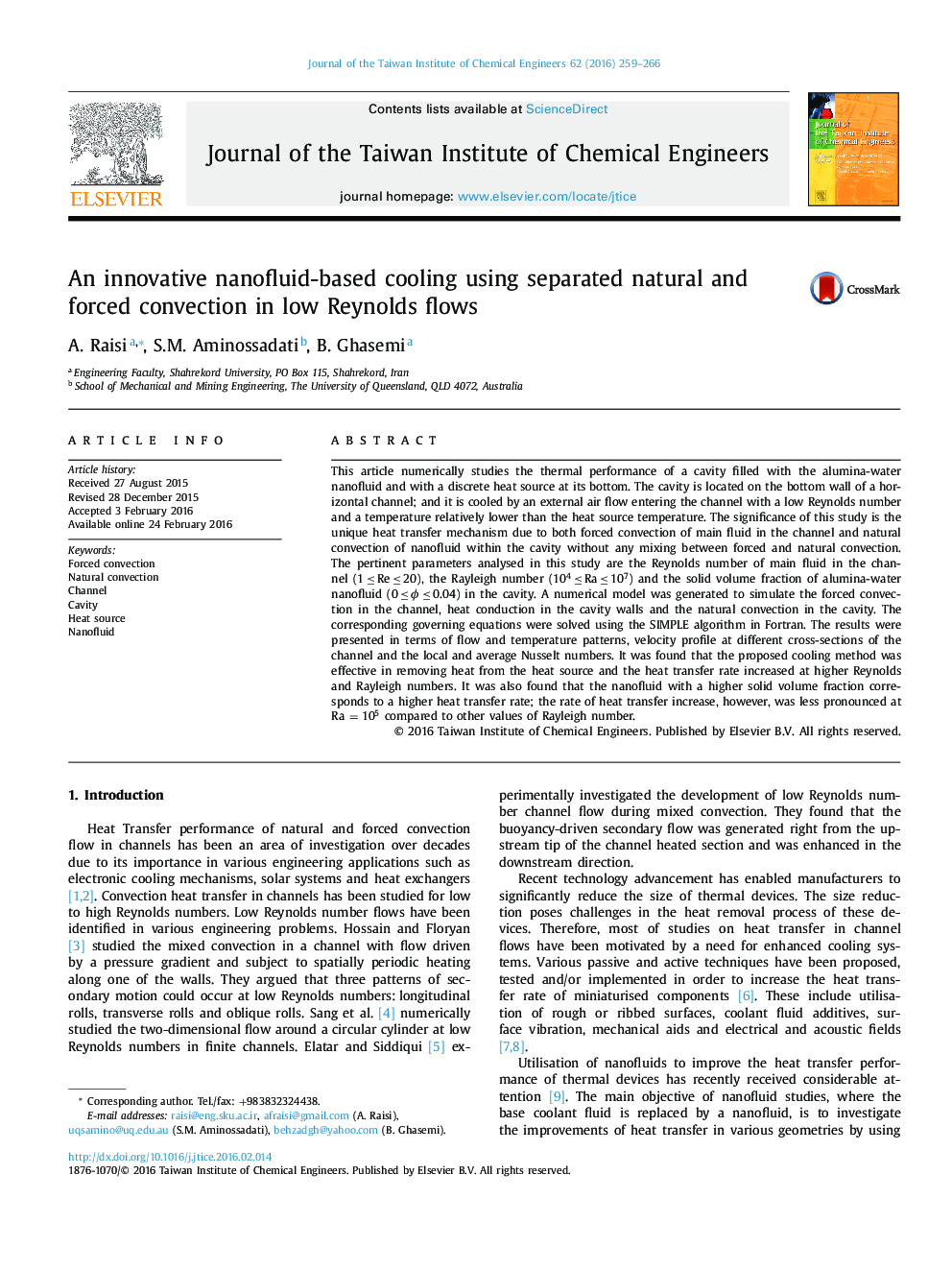 • Thermal performance of a nanofluid-filled cavity with a heat source located in a channel with coolant air is studied.
• Natural convection of nanofluid inside the cavity, forced convection of air inside the channel and heat conduction in the cavity walls are modeled.
• Heat transfer increases as the Raynolds and Rayleigh numbers increased.
• The influence of Rayleigh number on the heat transfer rate is more noticeable compared to the influence of Reynolds number.
• Heat removal from heat source is enhanced as the solid volume fraction is increased.

This article numerically studies the thermal performance of a cavity filled with the alumina-water nanofluid and with a discrete heat source at its bottom. The cavity is located on the bottom wall of a horizontal channel; and it is cooled by an external air flow entering the channel with a low Reynolds number and a temperature relatively lower than the heat source temperature. The significance of this study is the unique heat transfer mechanism due to both forced convection of main fluid in the channel and natural convection of nanofluid within the cavity without any mixing between forced and natural convection. The pertinent parameters analysed in this study are the Reynolds number of main fluid in the channel (1 ≤ Re ≤ 20), the Rayleigh number (104 ≤ Ra ≤ 107) and the solid volume fraction of alumina-water nanofluid (0 ≤ ϕ ≤ 0.04) in the cavity. A numerical model was generated to simulate the forced convection in the channel, heat conduction in the cavity walls and the natural convection in the cavity. The corresponding governing equations were solved using the SIMPLE algorithm in Fortran. The results were presented in terms of flow and temperature patterns, velocity profile at different cross-sections of the channel and the local and average Nusselt numbers. It was found that the proposed cooling method was effective in removing heat from the heat source and the heat transfer rate increased at higher Reynolds and Rayleigh numbers. It was also found that the nanofluid with a higher solid volume fraction corresponds to a higher heat transfer rate; the rate of heat transfer increase, however, was less pronounced at Ra = 105 compared to other values of Rayleigh number.