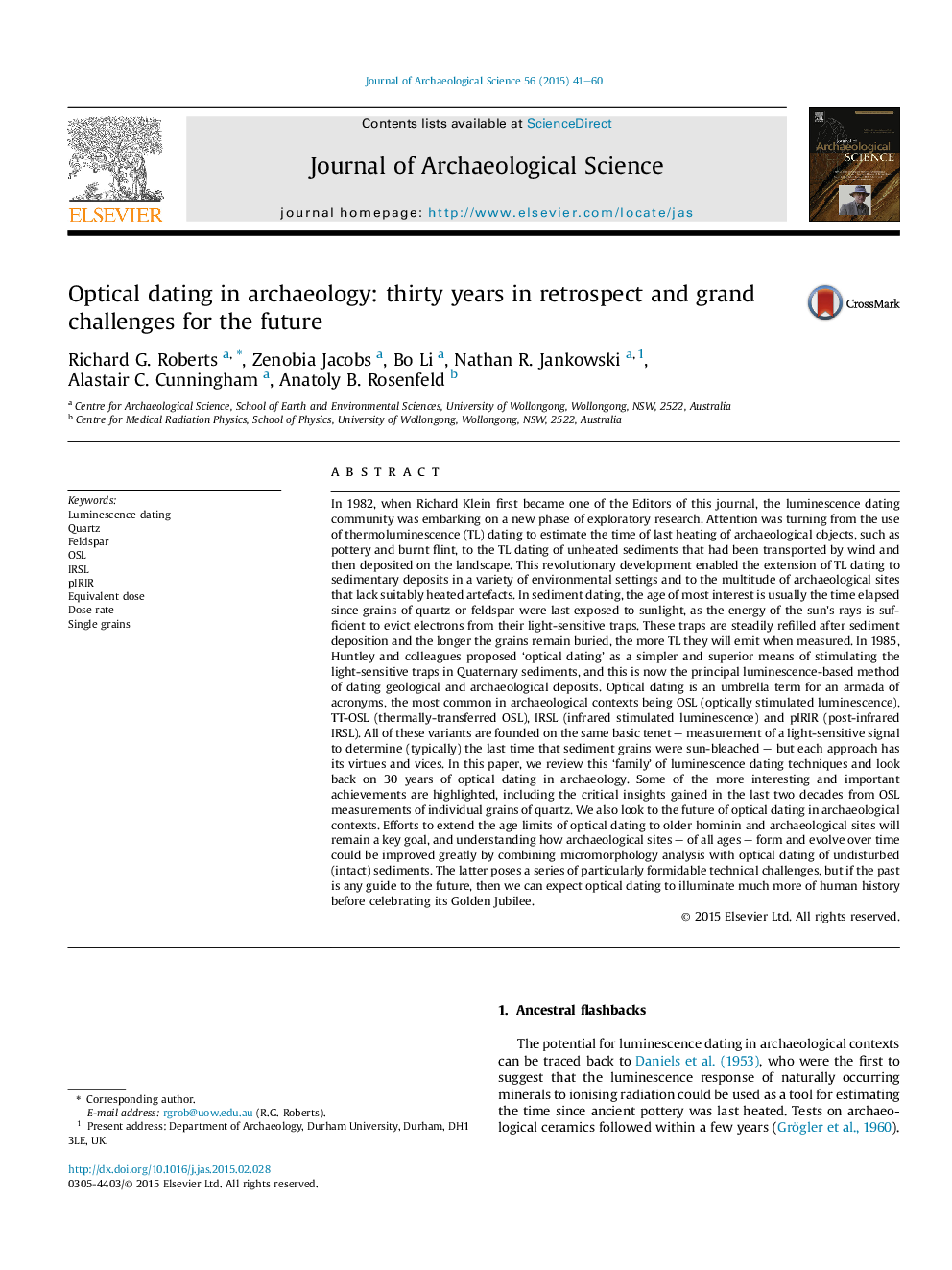 چکیده انگلیسی
In 1982, when Richard Klein first became one of the Editors of this journal, the luminescence dating community was embarking on a new phase of exploratory research. Attention was turning from the use of thermoluminescence (TL) dating to estimate the time of last heating of archaeological objects, such as pottery and burnt flint, to the TL dating of unheated sediments that had been transported by wind and then deposited on the landscape. This revolutionary development enabled the extension of TL dating to sedimentary deposits in a variety of environmental settings and to the multitude of archaeological sites that lack suitably heated artefacts. In sediment dating, the age of most interest is usually the time elapsed since grains of quartz or feldspar were last exposed to sunlight, as the energy of the sun's rays is sufficient to evict electrons from their light-sensitive traps. These traps are steadily refilled after sediment deposition and the longer the grains remain buried, the more TL they will emit when measured. In 1985, Huntley and colleagues proposed 'optical dating' as a simpler and superior means of stimulating the light-sensitive traps in Quaternary sediments, and this is now the principal luminescence-based method of dating geological and archaeological deposits. Optical dating is an umbrella term for an armada of acronyms, the most common in archaeological contexts being OSL (optically stimulated luminescence), TT-OSL (thermally-transferred OSL), IRSL (infrared stimulated luminescence) and pIRIR (post-infrared IRSL). All of these variants are founded on the same basic tenet - measurement of a light-sensitive signal to determine (typically) the last time that sediment grains were sun-bleached - but each approach has its virtues and vices. In this paper, we review this 'family' of luminescence dating techniques and look back on 30 years of optical dating in archaeology. Some of the more interesting and important achievements are highlighted, including the critical insights gained in the last two decades from OSL measurements of individual grains of quartz. We also look to the future of optical dating in archaeological contexts. Efforts to extend the age limits of optical dating to older hominin and archaeological sites will remain a key goal, and understanding how archaeological sites - of all ages - form and evolve over time could be improved greatly by combining micromorphology analysis with optical dating of undisturbed (intact) sediments. The latter poses a series of particularly formidable technical challenges, but if the past is any guide to the future, then we can expect optical dating to illuminate much more of human history before celebrating its Golden Jubilee.
ناشر
Database: Elsevier - ScienceDirect (ساینس دایرکت)
Journal: Journal of Archaeological Science - Volume 56, April 2015, Pages 41-60
نویسندگان
Richard G. Roberts, Zenobia Jacobs, Bo Li, Nathan R. Jankowski, Alastair C. Cunningham, Anatoly B. Rosenfeld,
دانلود مقاله + سفارش ترجمه
دانلود مقاله ISI انگلیسی
رایگان برای ایرانیان
سفارش ترجمه تخصصی
با تضمین قیمت و کیفیت
منتشر شده در