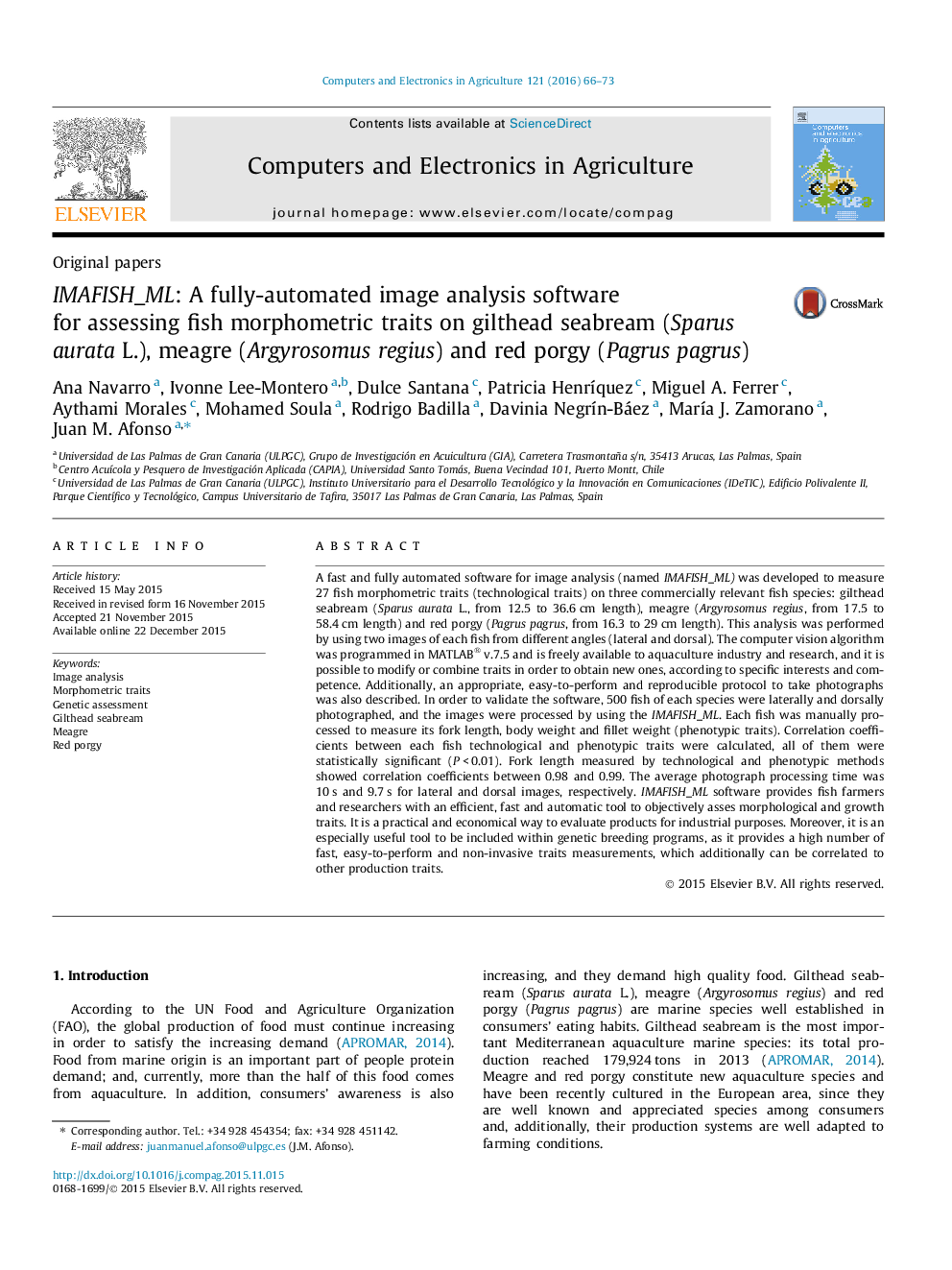 • IMAFISH_ML is a fast and automated image analysis software developed in this study.
• IMAFISH_ML measure 27 fish morphometric traits on three relevant farmed fish species.
• An easy and reproducible protocol to take photographs to fish has been also described.
• IMAFISH_ML was also successfully validated by analyzing 500 fish of each species.
• It allows objectively asses growth traits, especially useful in breeding programs.

A fast and fully automated software for image analysis (named IMAFISH_ML) was developed to measure 27 fish morphometric traits (technological traits) on three commercially relevant fish species: gilthead seabream (Sparus aurata L., from 12.5 to 36.6 cm length), meagre (Argyrosomus regius, from 17.5 to 58.4 cm length) and red porgy (Pagrus pagrus, from 16.3 to 29 cm length). This analysis was performed by using two images of each fish from different angles (lateral and dorsal). The computer vision algorithm was programmed in MATLAB® v.7.5 and is freely available to aquaculture industry and research, and it is possible to modify or combine traits in order to obtain new ones, according to specific interests and competence. Additionally, an appropriate, easy-to-perform and reproducible protocol to take photographs was also described. In order to validate the software, 500 fish of each species were laterally and dorsally photographed, and the images were processed by using the IMAFISH_ML. Each fish was manually processed to measure its fork length, body weight and fillet weight (phenotypic traits). Correlation coefficients between each fish technological and phenotypic traits were calculated, all of them were statistically significant (P < 0.01). Fork length measured by technological and phenotypic methods showed correlation coefficients between 0.98 and 0.99. The average photograph processing time was 10 s and 9.7 s for lateral and dorsal images, respectively. IMAFISH_ML software provides fish farmers and researchers with an efficient, fast and automatic tool to objectively asses morphological and growth traits. It is a practical and economical way to evaluate products for industrial purposes. Moreover, it is an especially useful tool to be included within genetic breeding programs, as it provides a high number of fast, easy-to-perform and non-invasive traits measurements, which additionally can be correlated to other production traits.