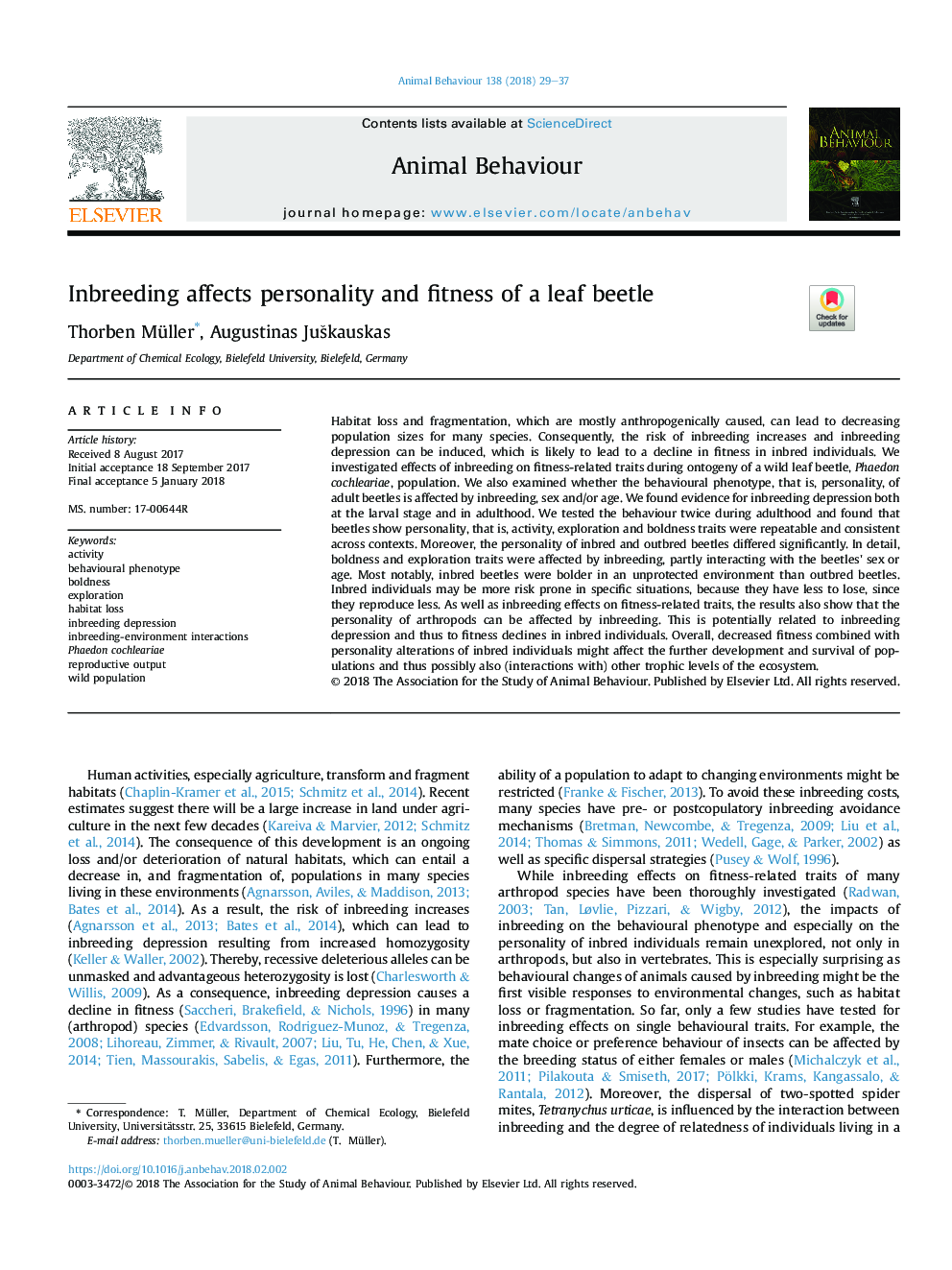 چکیده انگلیسی
Habitat loss and fragmentation, which are mostly anthropogenically caused, can lead to decreasing population sizes for many species. Consequently, the risk of inbreeding increases and inbreeding depression can be induced, which is likely to lead to a decline in fitness in inbred individuals. We investigated effects of inbreeding on fitness-related traits during ontogeny of a wild leaf beetle, Phaedon cochleariae, population. We also examined whether the behavioural phenotype, that is, personality, of adult beetles is affected by inbreeding, sex and/or age. We found evidence for inbreeding depression both at the larval stage and in adulthood. We tested the behaviour twice during adulthood and found that beetles show personality, that is, activity, exploration and boldness traits were repeatable and consistent across contexts. Moreover, the personality of inbred and outbred beetles differed significantly. In detail, boldness and exploration traits were affected by inbreeding, partly interacting with the beetles' sex or age. Most notably, inbred beetles were bolder in an unprotected environment than outbred beetles. Inbred individuals may be more risk prone in specific situations, because they have less to lose, since they reproduce less. As well as inbreeding effects on fitness-related traits, the results also show that the personality of arthropods can be affected by inbreeding. This is potentially related to inbreeding depression and thus to fitness declines in inbred individuals. Overall, decreased fitness combined with personality alterations of inbred individuals might affect the further development and survival of populations and thus possibly also (interactions with) other trophic levels of the ecosystem.
ناشر
Database: Elsevier - ScienceDirect (ساینس دایرکت)
Journal: Animal Behaviour - Volume 138, April 2018, Pages 29-37
نویسندگان
Thorben Müller, Augustinas JuÅ¡kauskas,
دانلود مقاله + سفارش ترجمه
دانلود مقاله ISI انگلیسی
رایگان برای ایرانیان
سفارش ترجمه تخصصی
با تضمین قیمت و کیفیت
منتشر شده در