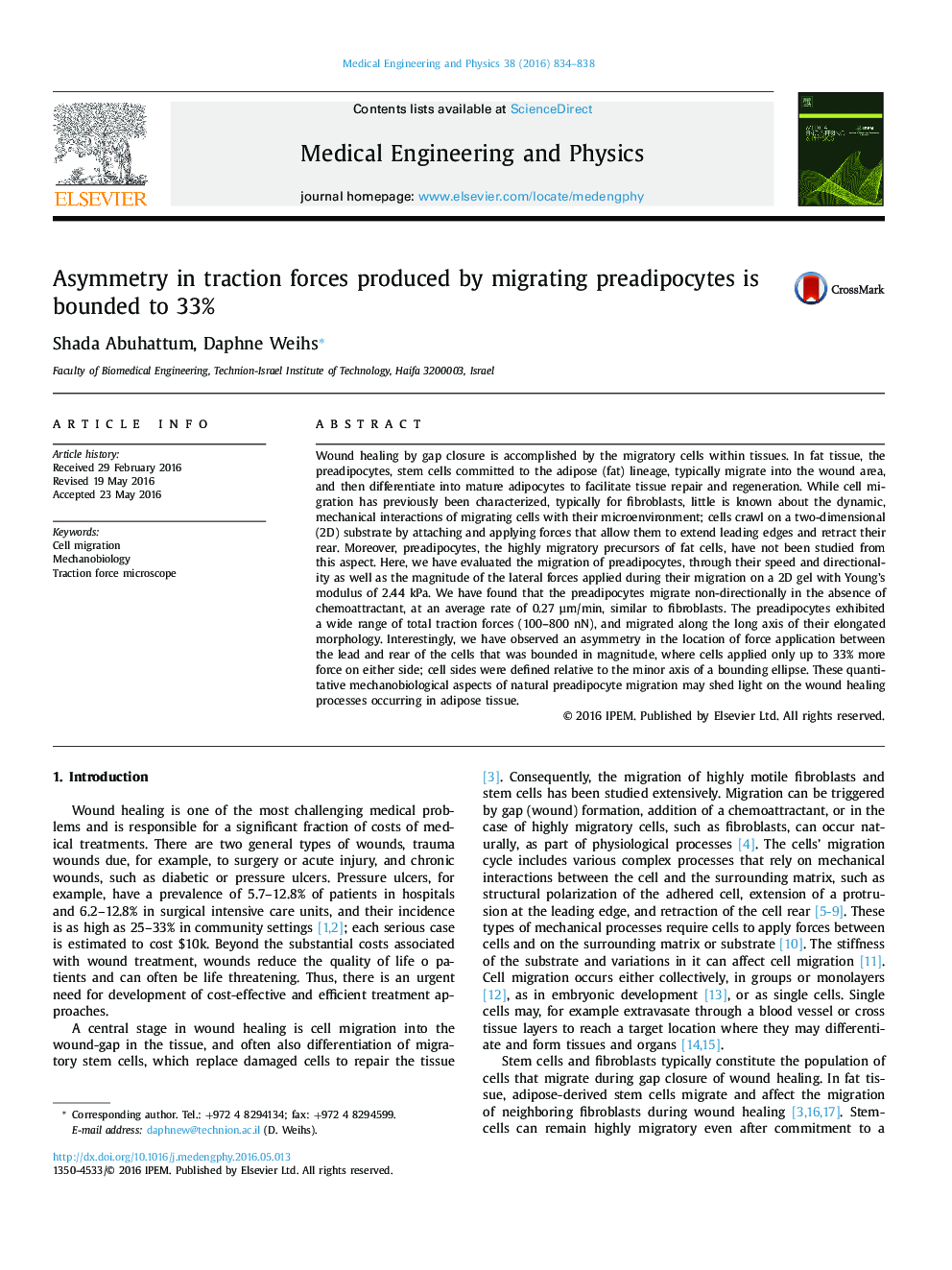 • Migration of single preadipocytes on a two-dimensional elastic polyacrylamide gel with Young's modulus of 2.44 kPa was evaluated.
• Preadipocyte migration in the absence of chemoattractants or mechanical attractants is non-persistent in direction between successive steps and unaligned with the cell's major axis.
• Cells apply a wide range of total traction forces (100–800 nN) during different stages of migration.
• Asymmetry in localization of applied traction forces between the left and right sides of the cell, relative to its minor axis, is limited to 33%.

Wound healing by gap closure is accomplished by the migratory cells within tissues. In fat tissue, the preadipocytes, stem cells committed to the adipose (fat) lineage, typically migrate into the wound area, and then differentiate into mature adipocytes to facilitate tissue repair and regeneration. While cell migration has previously been characterized, typically for fibroblasts, little is known about the dynamic, mechanical interactions of migrating cells with their microenvironment; cells crawl on a two-dimensional (2D) substrate by attaching and applying forces that allow them to extend leading edges and retract their rear. Moreover, preadipocytes, the highly migratory precursors of fat cells, have not been studied from this aspect. Here, we have evaluated the migration of preadipocytes, through their speed and directionality as well as the magnitude of the lateral forces applied during their migration on a 2D gel with Young's modulus of 2.44 kPa. We have found that the preadipocytes migrate non-directionally in the absence of chemoattractant, at an average rate of 0.27 µm/min, similar to fibroblasts. The preadipocytes exhibited a wide range of total traction forces (100–800 nN), and migrated along the long axis of their elongated morphology. Interestingly, we have observed an asymmetry in the location of force application between the lead and rear of the cells that was bounded in magnitude, where cells applied only up to 33% more force on either side; cell sides were defined relative to the minor axis of a bounding ellipse. These quantitative mechanobiological aspects of natural preadipocyte migration may shed light on the wound healing processes occurring in adipose tissue.