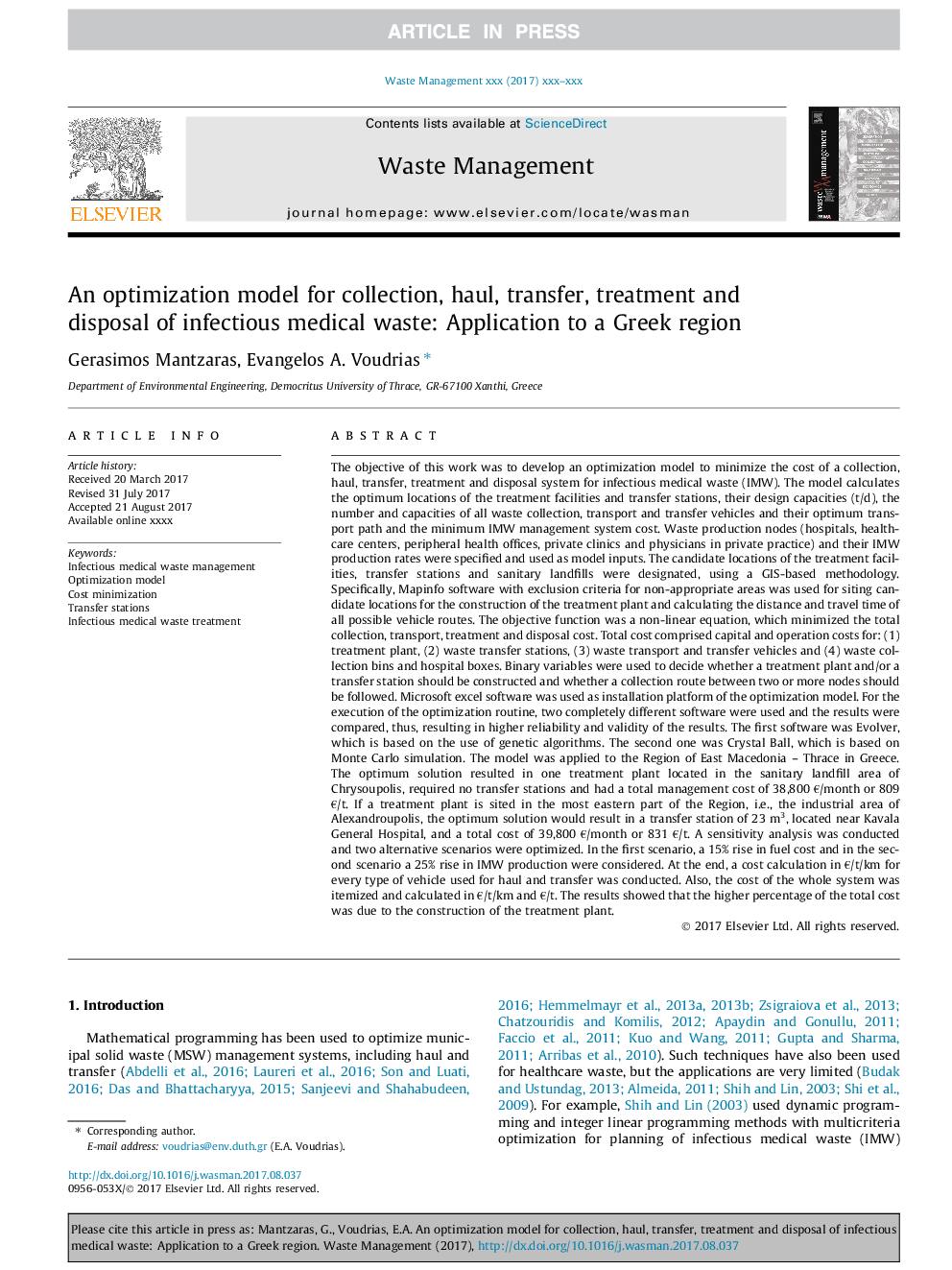 چکیده انگلیسی
The objective of this work was to develop an optimization model to minimize the cost of a collection, haul, transfer, treatment and disposal system for infectious medical waste (IMW). The model calculates the optimum locations of the treatment facilities and transfer stations, their design capacities (t/d), the number and capacities of all waste collection, transport and transfer vehicles and their optimum transport path and the minimum IMW management system cost. Waste production nodes (hospitals, healthcare centers, peripheral health offices, private clinics and physicians in private practice) and their IMW production rates were specified and used as model inputs. The candidate locations of the treatment facilities, transfer stations and sanitary landfills were designated, using a GIS-based methodology. Specifically, Mapinfo software with exclusion criteria for non-appropriate areas was used for siting candidate locations for the construction of the treatment plant and calculating the distance and travel time of all possible vehicle routes. The objective function was a non-linear equation, which minimized the total collection, transport, treatment and disposal cost. Total cost comprised capital and operation costs for: (1) treatment plant, (2) waste transfer stations, (3) waste transport and transfer vehicles and (4) waste collection bins and hospital boxes. Binary variables were used to decide whether a treatment plant and/or a transfer station should be constructed and whether a collection route between two or more nodes should be followed. Microsoft excel software was used as installation platform of the optimization model. For the execution of the optimization routine, two completely different software were used and the results were compared, thus, resulting in higher reliability and validity of the results. The first software was Evolver, which is based on the use of genetic algorithms. The second one was Crystal Ball, which is based on Monte Carlo simulation. The model was applied to the Region of East Macedonia - Thrace in Greece. The optimum solution resulted in one treatment plant located in the sanitary landfill area of Chrysoupolis, required no transfer stations and had a total management cost of 38,800 â¬/month or 809 â¬/t. If a treatment plant is sited in the most eastern part of the Region, i.e., the industrial area of Alexandroupolis, the optimum solution would result in a transfer station of 23 m3, located near Kavala General Hospital, and a total cost of 39,800 â¬/month or 831 â¬/t. A sensitivity analysis was conducted and two alternative scenarios were optimized. In the first scenario, a 15% rise in fuel cost and in the second scenario a 25% rise in IMW production were considered. At the end, a cost calculation in â¬/t/km for every type of vehicle used for haul and transfer was conducted. Also, the cost of the whole system was itemized and calculated in â¬/t/km and â¬/t. The results showed that the higher percentage of the total cost was due to the construction of the treatment plant.
ناشر
Database: Elsevier - ScienceDirect (ساینس دایرکت)
Journal: Waste Management - Volume 69, November 2017, Pages 518-534
نویسندگان
Gerasimos Mantzaras, Evangelos A. Voudrias,
دانلود مقاله + سفارش ترجمه
دانلود مقاله ISI انگلیسی
رایگان برای ایرانیان
سفارش ترجمه تخصصی
با تضمین قیمت و کیفیت
منتشر شده در