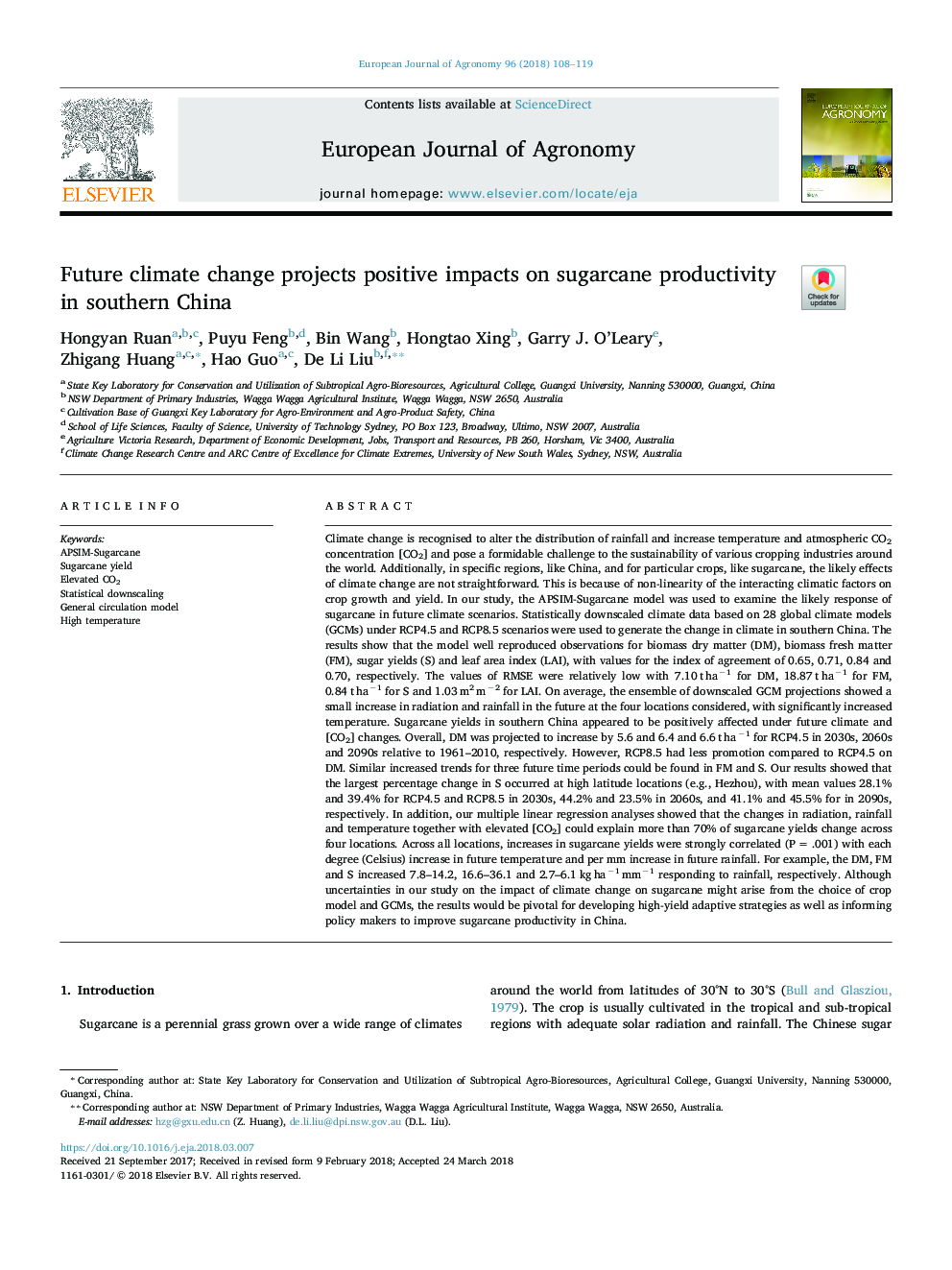 چکیده انگلیسی
Climate change is recognised to alter the distribution of rainfall and increase temperature and atmospheric CO2 concentration [CO2] and pose a formidable challenge to the sustainability of various cropping industries around the world. Additionally, in specific regions, like China, and for particular crops, like sugarcane, the likely effects of climate change are not straightforward. This is because of non-linearity of the interacting climatic factors on crop growth and yield. In our study, the APSIM-Sugarcane model was used to examine the likely response of sugarcane in future climate scenarios. Statistically downscaled climate data based on 28 global climate models (GCMs) under RCP4.5 and RCP8.5 scenarios were used to generate the change in climate in southern China. The results show that the model well reproduced observations for biomass dry matter (DM), biomass fresh matter (FM), sugar yields (S) and leaf area index (LAI), with values for the index of agreement of 0.65, 0.71, 0.84 and 0.70, respectively. The values of RMSE were relatively low with 7.10â¯tâ¯haâ1 for DM, 18.87â¯tâ¯haâ1 for FM, 0.84â¯tâ¯haâ1 for S and 1.03â¯m2â¯mâ2 for LAI. On average, the ensemble of downscaled GCM projections showed a small increase in radiation and rainfall in the future at the four locations considered, with significantly increased temperature. Sugarcane yields in southern China appeared to be positively affected under future climate and [CO2] changes. Overall, DM was projected to increase by 5.6 and 6.4 and 6.6â¯tâ¯haâ1 for RCP4.5 in 2030s, 2060s and 2090s relative to 1961-2010, respectively. However, RCP8.5 had less promotion compared to RCP4.5 on DM. Similar increased trends for three future time periods could be found in FM and S. Our results showed that the largest percentage change in S occurred at high latitude locations (e.g., Hezhou), with mean values 28.1% and 39.4% for RCP4.5 and RCP8.5 in 2030s, 44.2% and 23.5% in 2060s, and 41.1% and 45.5% for in 2090s, respectively. In addition, our multiple linear regression analyses showed that the changes in radiation, rainfall and temperature together with elevated [CO2] could explain more than 70% of sugarcane yields change across four locations. Across all locations, increases in sugarcane yields were strongly correlated (Pâ¯=â¯.001) with each degree (Celsius) increase in future temperature and per mm increase in future rainfall. For example, the DM, FM and S increased 7.8-14.2, 16.6-36.1 and 2.7-6.1â¯kgâ¯haâ1â¯mmâ1 responding to rainfall, respectively. Although uncertainties in our study on the impact of climate change on sugarcane might arise from the choice of crop model and GCMs, the results would be pivotal for developing high-yield adaptive strategies as well as informing policy makers to improve sugarcane productivity in China.
ناشر
Database: Elsevier - ScienceDirect (ساینس دایرکت)
Journal: European Journal of Agronomy - Volume 96, May 2018, Pages 108-119
نویسندگان
Hongyan Ruan, Puyu Feng, Bin Wang, Hongtao Xing, Garry J. O'Leary, Zhigang Huang, Hao Guo, De Li Liu,
دانلود مقاله + سفارش ترجمه
دانلود مقاله ISI انگلیسی
رایگان برای ایرانیان
سفارش ترجمه تخصصی
با تضمین قیمت و کیفیت
منتشر شده در