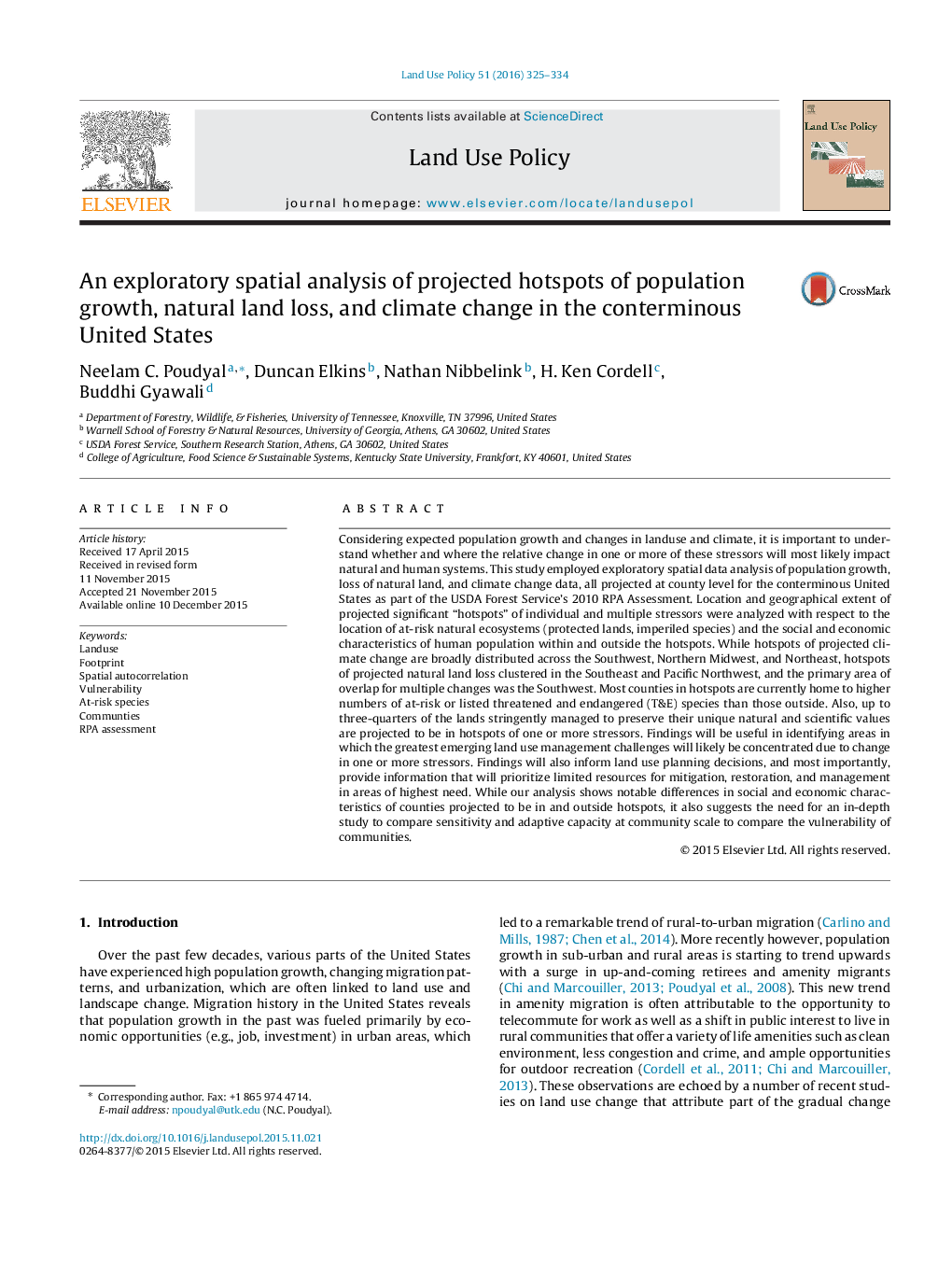 • Hotspots of projected change in population, landuse, and climate are mapped.
• Location and geographical extent of the projected hotspots of population, landuse and climate vary across the nation.
• Areas projected in hotspots are currently home to higher number of at-risk or listed T&E species.
• Areas projected in hotspots do not seem to be disadvantaged relative to their outside counterparts.
• Findings will inform land use planning decisions, and guide prioritizing areas for mitigation and management.

Considering expected population growth and changes in landuse and climate, it is important to understand whether and where the relative change in one or more of these stressors will most likely impact natural and human systems. This study employed exploratory spatial data analysis of population growth, loss of natural land, and climate change data, all projected at county level for the conterminous United States as part of the USDA Forest Service's 2010 RPA Assessment. Location and geographical extent of projected significant “hotspots” of individual and multiple stressors were analyzed with respect to the location of at-risk natural ecosystems (protected lands, imperiled species) and the social and economic characteristics of human population within and outside the hotspots. While hotspots of projected climate change are broadly distributed across the Southwest, Northern Midwest, and Northeast, hotspots of projected natural land loss clustered in the Southeast and Pacific Northwest, and the primary area of overlap for multiple changes was the Southwest. Most counties in hotspots are currently home to higher numbers of at-risk or listed threatened and endangered (T&E) species than those outside. Also, up to three-quarters of the lands stringently managed to preserve their unique natural and scientific values are projected to be in hotspots of one or more stressors. Findings will be useful in identifying areas in which the greatest emerging land use management challenges will likely be concentrated due to change in one or more stressors. Findings will also inform land use planning decisions, and most importantly, provide information that will prioritize limited resources for mitigation, restoration, and management in areas of highest need. While our analysis shows notable differences in social and economic characteristics of counties projected to be in and outside hotspots, it also suggests the need for an in-depth study to compare sensitivity and adaptive capacity at community scale to compare the vulnerability of communities.