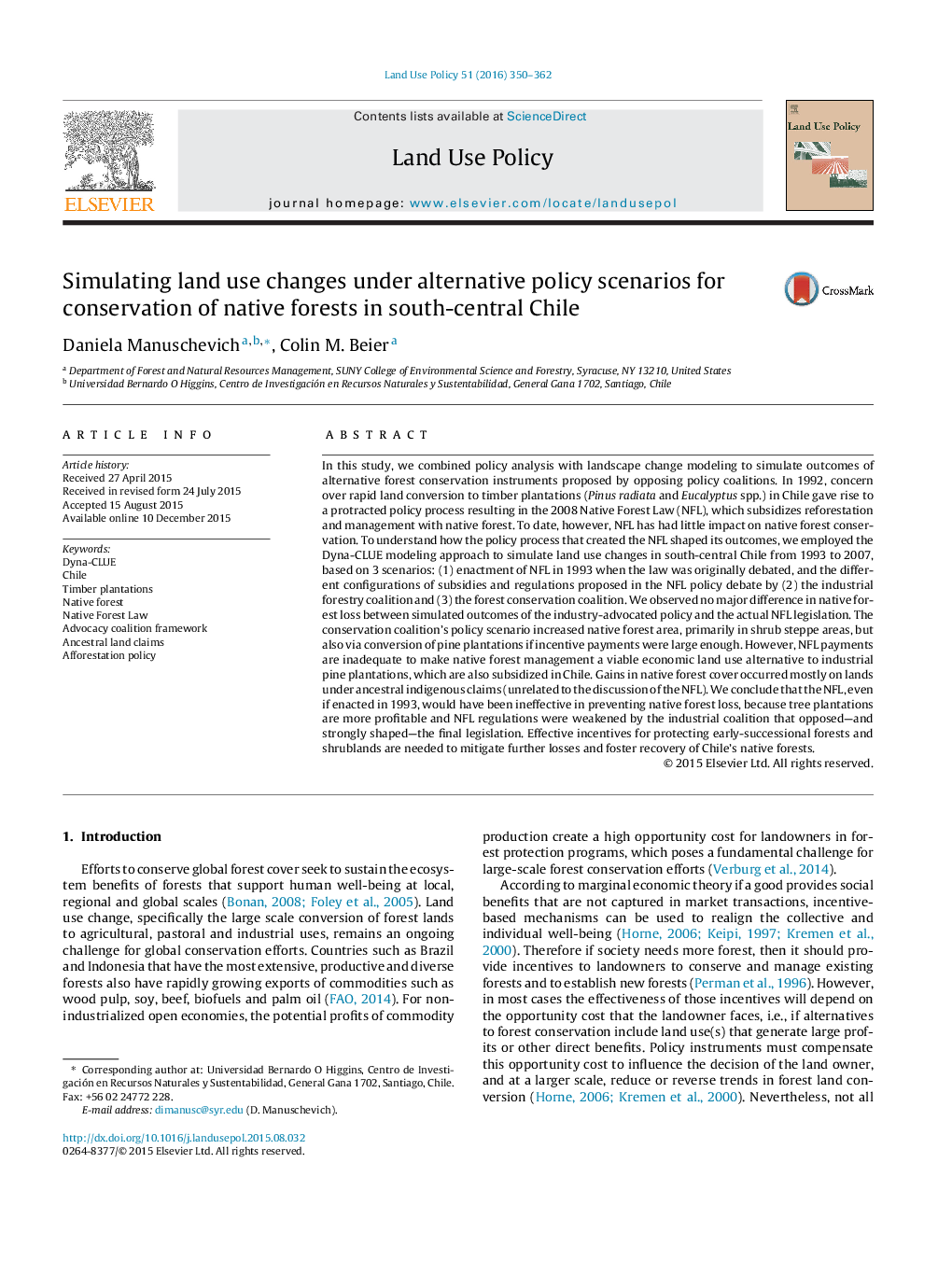 • Politics play an important, but often poorly understood role in the development of conservation policies.
• We combined land use modeling with analysis of the political debate between industry and conservation coalitions over the Native Forest Law (NFL) in Chile.
• Simulated land use outcomes for a watershed in south-central Chile were very similar for the legislated NFL and industrial forestry scenarios.
• Small subsidies for native forest conservation and management cannot offset the high profitability of subsidized industrial timber plantations.
• Higher incentive payments and reduced transaction costs can improve outcomes of forest conservation and land use policy in Chile.

In this study, we combined policy analysis with landscape change modeling to simulate outcomes of alternative forest conservation instruments proposed by opposing policy coalitions. In 1992, concern over rapid land conversion to timber plantations (Pinus radiata and Eucalyptus spp.) in Chile gave rise to a protracted policy process resulting in the 2008 Native Forest Law (NFL), which subsidizes reforestation and management with native forest. To date, however, NFL has had little impact on native forest conservation. To understand how the policy process that created the NFL shaped its outcomes, we employed the Dyna-CLUE modeling approach to simulate land use changes in south-central Chile from 1993 to 2007, based on 3 scenarios: (1) enactment of NFL in 1993 when the law was originally debated, and the different configurations of subsidies and regulations proposed in the NFL policy debate by (2) the industrial forestry coalition and (3) the forest conservation coalition. We observed no major difference in native forest loss between simulated outcomes of the industry-advocated policy and the actual NFL legislation. The conservation coalition’s policy scenario increased native forest area, primarily in shrub steppe areas, but also via conversion of pine plantations if incentive payments were large enough. However, NFL payments are inadequate to make native forest management a viable economic land use alternative to industrial pine plantations, which are also subsidized in Chile. Gains in native forest cover occurred mostly on lands under ancestral indigenous claims (unrelated to the discussion of the NFL). We conclude that the NFL, even if enacted in 1993, would have been ineffective in preventing native forest loss, because tree plantations are more profitable and NFL regulations were weakened by the industrial coalition that opposed—and strongly shaped—the final legislation. Effective incentives for protecting early-successional forests and shrublands are needed to mitigate further losses and foster recovery of Chile’s native forests.