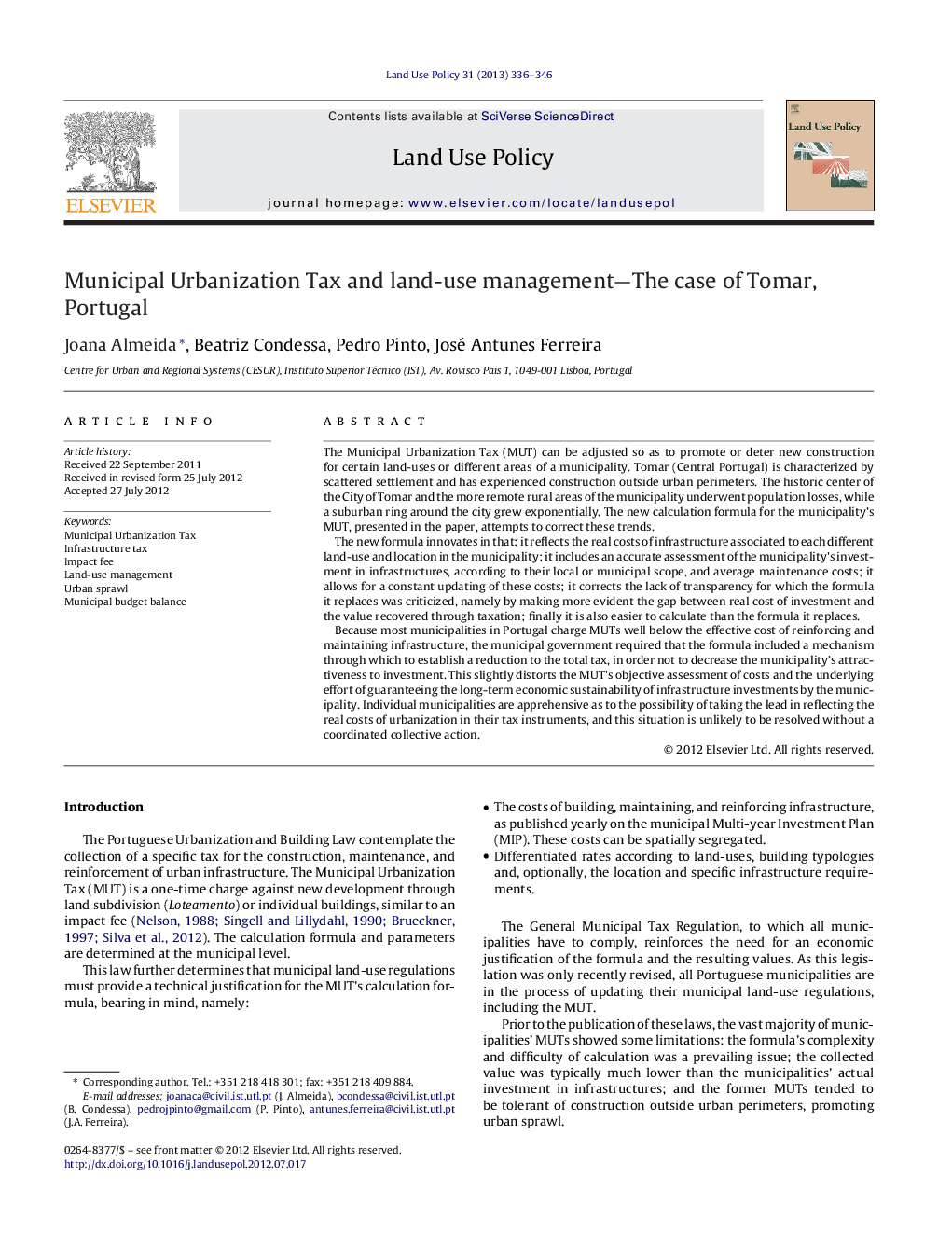 The Municipal Urbanization Tax (MUT) can be adjusted so as to promote or deter new construction for certain land-uses or different areas of a municipality. Tomar (Central Portugal) is characterized by scattered settlement and has experienced construction outside urban perimeters. The historic center of the City of Tomar and the more remote rural areas of the municipality underwent population losses, while a suburban ring around the city grew exponentially. The new calculation formula for the municipality's MUT, presented in the paper, attempts to correct these trends.The new formula innovates in that: it reflects the real costs of infrastructure associated to each different land-use and location in the municipality; it includes an accurate assessment of the municipality's investment in infrastructures, according to their local or municipal scope, and average maintenance costs; it allows for a constant updating of these costs; it corrects the lack of transparency for which the formula it replaces was criticized, namely by making more evident the gap between real cost of investment and the value recovered through taxation; finally it is also easier to calculate than the formula it replaces.Because most municipalities in Portugal charge MUTs well below the effective cost of reinforcing and maintaining infrastructure, the municipal government required that the formula included a mechanism through which to establish a reduction to the total tax, in order not to decrease the municipality's attractiveness to investment. This slightly distorts the MUT's objective assessment of costs and the underlying effort of guaranteeing the long-term economic sustainability of infrastructure investments by the municipality. Individual municipalities are apprehensive as to the possibility of taking the lead in reflecting the real costs of urbanization in their tax instruments, and this situation is unlikely to be resolved without a coordinated collective action.

► The revised urbanization tax aims at containing sprawl and promote urban regeneration.
► It is based on actual investments in infrastructure, reflecting user-payer principle.
► Its effectiveness in controlling sprawl is dependent on political decisions.
► Political decisions are focused in maintaining regional competitiveness.
► Inter-municipal competition threatens long-term budget sustainability for investment.