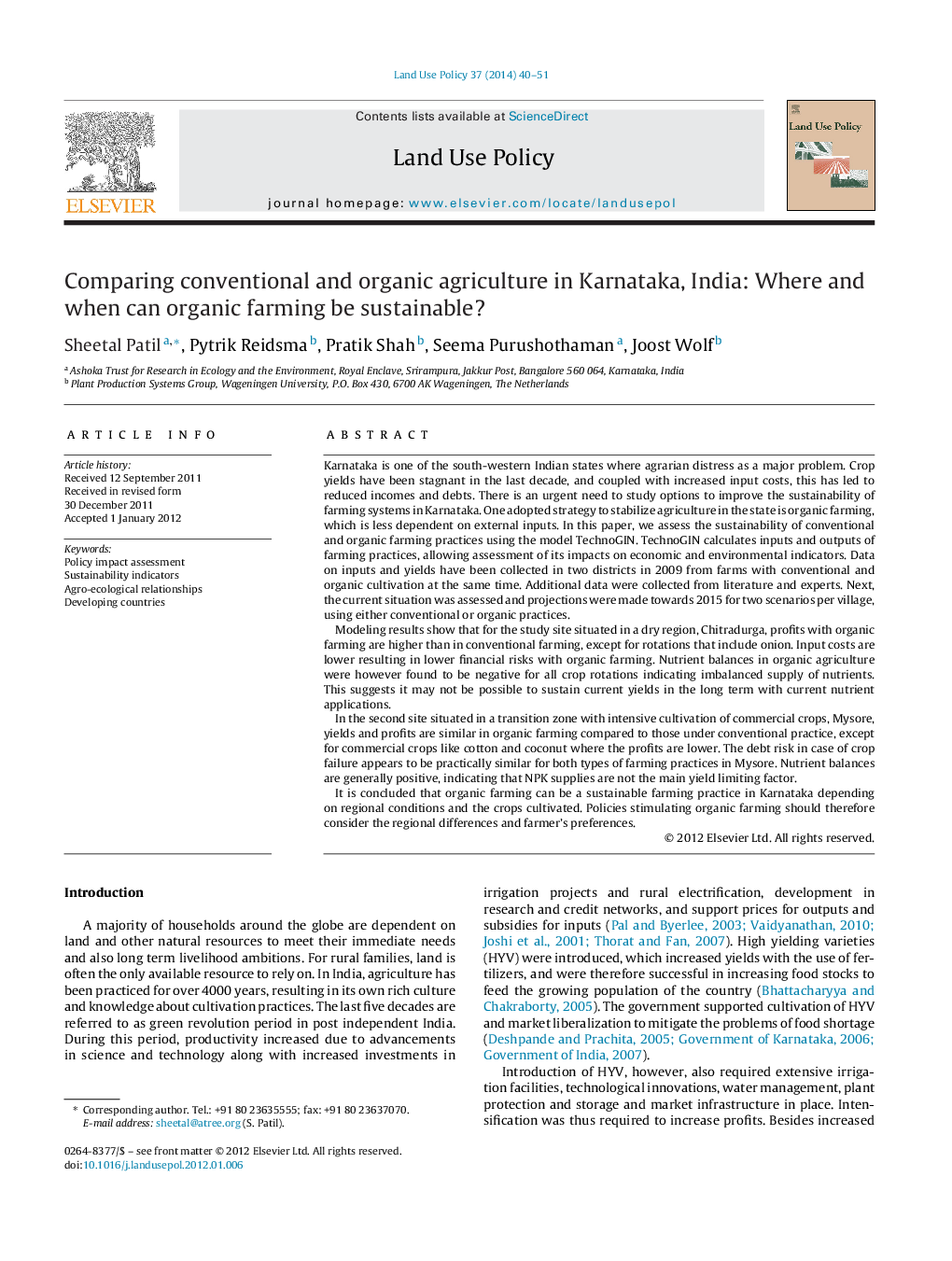 Karnataka is one of the south-western Indian states where agrarian distress as a major problem. Crop yields have been stagnant in the last decade, and coupled with increased input costs, this has led to reduced incomes and debts. There is an urgent need to study options to improve the sustainability of farming systems in Karnataka. One adopted strategy to stabilize agriculture in the state is organic farming, which is less dependent on external inputs. In this paper, we assess the sustainability of conventional and organic farming practices using the model TechnoGIN. TechnoGIN calculates inputs and outputs of farming practices, allowing assessment of its impacts on economic and environmental indicators. Data on inputs and yields have been collected in two districts in 2009 from farms with conventional and organic cultivation at the same time. Additional data were collected from literature and experts. Next, the current situation was assessed and projections were made towards 2015 for two scenarios per village, using either conventional or organic practices.Modeling results show that for the study site situated in a dry region, Chitradurga, profits with organic farming are higher than in conventional farming, except for rotations that include onion. Input costs are lower resulting in lower financial risks with organic farming. Nutrient balances in organic agriculture were however found to be negative for all crop rotations indicating imbalanced supply of nutrients. This suggests it may not be possible to sustain current yields in the long term with current nutrient applications.In the second site situated in a transition zone with intensive cultivation of commercial crops, Mysore, yields and profits are similar in organic farming compared to those under conventional practice, except for commercial crops like cotton and coconut where the profits are lower. The debt risk in case of crop failure appears to be practically similar for both types of farming practices in Mysore. Nutrient balances are generally positive, indicating that NPK supplies are not the main yield limiting factor.It is concluded that organic farming can be a sustainable farming practice in Karnataka depending on regional conditions and the crops cultivated. Policies stimulating organic farming should therefore consider the regional differences and farmer's preferences.

► Organic farming can be sustainable farming practice in the state depending on regional conditions and crops cultivated.
► Organic farming has potential to increase net returns, reduce the risk of crop failure and reduce environmental impacts.
► Nitrogen balance in most crop rotations with organic cultivation results in negative in dry region, indicating need to improve Nitrogen supply.
► Net losses in case of crop failure are much less in organic practice compared to conventional in both dry and wetter regions.
► Sustainability in both dry and wetter regions can be increased in future with improved nutrient management.