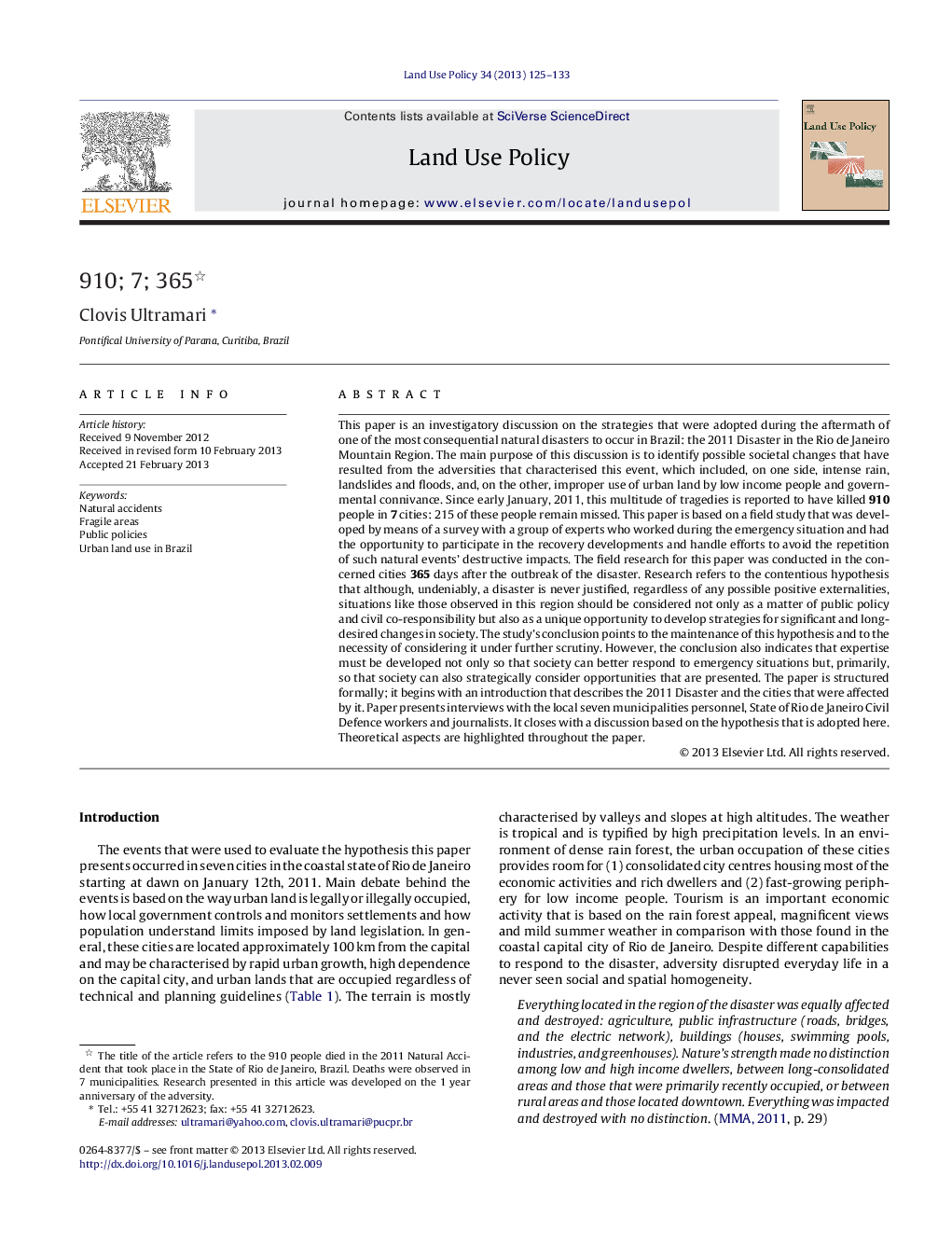 This paper is an investigatory discussion on the strategies that were adopted during the aftermath of one of the most consequential natural disasters to occur in Brazil: the 2011 Disaster in the Rio de Janeiro Mountain Region. The main purpose of this discussion is to identify possible societal changes that have resulted from the adversities that characterised this event, which included, on one side, intense rain, landslides and floods, and, on the other, improper use of urban land by low income people and governmental connivance. Since early January, 2011, this multitude of tragedies is reported to have killed 910 people in 7 cities: 215 of these people remain missed. This paper is based on a field study that was developed by means of a survey with a group of experts who worked during the emergency situation and had the opportunity to participate in the recovery developments and handle efforts to avoid the repetition of such natural events’ destructive impacts. The field research for this paper was conducted in the concerned cities 365 days after the outbreak of the disaster. Research refers to the contentious hypothesis that although, undeniably, a disaster is never justified, regardless of any possible positive externalities, situations like those observed in this region should be considered not only as a matter of public policy and civil co-responsibility but also as a unique opportunity to develop strategies for significant and long-desired changes in society. The study's conclusion points to the maintenance of this hypothesis and to the necessity of considering it under further scrutiny. However, the conclusion also indicates that expertise must be developed not only so that society can better respond to emergency situations but, primarily, so that society can also strategically consider opportunities that are presented. The paper is structured formally; it begins with an introduction that describes the 2011 Disaster and the cities that were affected by it. Paper presents interviews with the local seven municipalities personnel, State of Rio de Janeiro Civil Defence workers and journalists. It closes with a discussion based on the hypothesis that is adopted here. Theoretical aspects are highlighted throughout the paper.

► 2011 floods in Brazil may have generated positive and long desired changes.
► We must acquire expertise to consider opportunities out of natural accidents.
► 2011 Disaster confirmed population still sees government as a cardinal reference.
► Media's role was confirmed decisive and acquired quality in its product.